Zorro is a Persona in Persona 5.

Zorro (Spanish for "fox" and "sly") is a fictional character created in 1919 by New York–based pulp writer Johnston McCulley. His true name is Don Diego de la Vega. Zorro is a Californio nobleman of Spanish and Native Californian descent, living in Los Angeles during the era of Mexican rule. He is a masked outlaw who defends commoners and the indigenous people of the land against tyrannical officials and other villains.

"A masked swordsman of justice who fought in California against corrupt officials during the era of Spanish rule. He always left his "Z" mark with his rapier wherever he appeared."
—Persona 5 compendium

Zorro is the Initial Persona of Morgana. The book Zorro, the Outlaw can be obtained from the Shujin Academy Library, and boosts the Kindness stat upon completion.

Zorro specializes in Wind skills and recovery, and has access to a bountiful amount of status recovery, HP recovery and even full revival. At level 75 he also has access to Salvation, the strongest healing skill in the game, which fully heals the party and removes all status conditions.

Zorro as he appears in the manga adaption

Zorro as he appears in the anime adaption

Zorro in Persona O.A. (No Background) 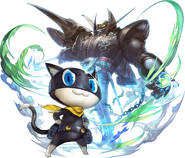 Zorro with Morgana in Another Eden
Community content is available under CC-BY-SA unless otherwise noted.
Advertisement