Zombie is a demon in the series.

Zombies are a prevalent popular culture icon in the horror genre. Originated from tales of Afro-Caribbean origin, possibly in Haiti, where the belief and practice of the Vodou is commonplace. A zombie is a reanimated corpse without speech or free-will, believed to have been evoked back to life by a powerful sorcerer and made to serve as their servant.

In some depictions, demons or humans rip out the souls of humans (ranging from criminals and villains to citizens and innocents) to control their bodies. It is said that the victims of zombies become zombies themselves.

"Origin: Haiti. Humans brought back to life without souls. Demons rip out the souls of criminals and villans to control their bodies. It is said that the victims of zombies become zombies themselves."
—Shin Megami Tensei A-Mode DDS dictionary

Zombies are the first enemies encountered in the game. They are used as fodder for Raidou to prove his abilities in the Kuzunoha Training Hall. Zombies cannot be captured through Confinement. They will appear as minor enemies in Tsukudo-Cho, the Daidouji Residence, Dark Tsukudo-Cho, Ginza-Cho, Dark Fukagawa-Cho and the Matrix Labyrinth within the Daidouji Factory. They will quickly become a nuisance enemy, as they spawn in waves when they are the sole enemy encountered with quickly diminishing returns on Loyalty, EXP and money; all while causing companion demons to waist MP spamming skills on them. They do drop normal bullets for Raidou's gun, however, and can be farmed to restock.

"An undead demon that appeared in the Capital. It is a lower-class being with no real mind of its own. It is similar to the zombies created through Vodoo, but different in its manner of creation."
—Gouma-Den Devil Chart 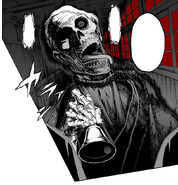 Zombie as it appears in Devil Summoner: Raidou Kuzunoha vs. The Lone Marebito
Add a photo to this gallery

Retrieved from "https://megamitensei.fandom.com/wiki/Zombie?oldid=402959"
Community content is available under CC-BY-SA unless otherwise noted.