Zeus, also known as Zenon in the Last Bible games, is a demon in the series.

Zeus, known as the "Father of Gods and Men," is the god of thunder, lighting, justice and the ruler of the sky in Greek mythology. He ruled as king of the gods of Mount Olympus along with being the sovereign of the heavens and Earth. His Roman counterpart is the god king Jupiter.

He was respected as an all-father who was chief of the gods, and assigned the others to their roles: "Even the gods who are not his natural children address him as Father, and all the gods rise in his presence." He was equated with many foreign weather gods, permitting Pausanias to observe "That Zeus is king in heaven is a saying common to all men." Zeus' symbols are the thunderbolt, eagle, bull and oak.

Zeus was infamous for his lust of beautiful mortals and immortals; indeed, the king of the gods transcended male or female and even species when it came to his many affairs. He was known for having affairs with those he believed he "loved," which enraged Hera to no end. Zeus was known to have assaulted and slept with many women aside from Hera, and he had many sons and daughters. The most well known of them are Aphrodite, Hermes, Ares, Apollo, Artemis, Athena, Hephaestus, Dionysus, Persephone, Perseus and Heracles.

Cronus, his father, had sired six children with Rhea, his wife: Poseidon, Hades, Demeter, Hestia, Hera and Zeus himself. But Cronus swallowed them all because of a prophecy claiming that he would be overthrown by his son, as he had overthrown his own father. Rhea, seeking revenge, hid Zeus at birth and gave Cronus a rock wrapped in cloth to swallow instead. Once he reached adulthood, Zeus set out to fight his father. He made Cronus vomit the rock and his brothers and sisters, then he freed the Hecatonchires and the Cyclopes, and with their help, started a war against his tyrannical father and the rest of the Titans known as the Titanomachy. Once victorious, Zeus casts his father and the other Titans to Tartarus, then divides the world between himself, Poseidon and Hades. Zeus got the sky, Poseidon the sea and Hades the underworld.

Zeus is one of the four new Deities in Megami Tensei II, and is extremely similar stat-wise to Lucifer's recruitable form. To obtain him, Megami Tensei II must be started from a completed Megami Tensei save. After killing Bael's frog, he can be created by fusing Leto, Artemis and Apollo, regardless of the protagonist's level.

Zeus is encountered at the end of the fifth Sphere in the Womb of Grief. The protagonist arrives to find Zeus in combat with Alex. Zeus overpowers her, and George forcibly enacts a shutdown of her Demonica for safety. This prompts the protagonist to either intervene or observe, upon which Zeus turns his attention to the protagonist.

Zeus's fight revolves around Physical and Electric attacks, so prepare accordingly. Adamant Sickle is a Physical attack that also raises his attack twice. Keraunos does Elec damage to a target and inflicts a severe defense debuff on them, dropping the defense by 4 stages. Divine Lightning is also an Almighty attack that can inflict mute. When he hits half health, he can also apply Sol Canus, a field effect that purges all buffs and debuffs while also preventing further buffs and debuffs from being applied.

It pays well to keep buffs and debuffs in moderation - don't fully buff or debuff or he'll respond with Dekaja and Dekunda to erase your efforts. When Sol Canus happens, play defensively and wait it out, or if his health is low enough, try and burst him down with Co-Op attacks, especially if Blitzkrieg triggers to give your team the turn advantage.

Upon defeat, Zeus can be summoned through a Special fusion of Wild Hunt, Oberon, Anzu, and Throne once the protagonist reaches level 67. He leaves behind the Fifth Fruit and warns the protagonist of what his sister is capable of, alluding to the events that happen in the new endings. The player also finds the Armor Shard, which is used to make the Co-Op Enhance W Sub-App, allowing the protagonist to Co-Op with demons of any alignment.

"The main deity of Greek mythology. Said to be omnipotent, he is both god of the sky and ruler of the twelve gods of Olympus.
He is a son of the titan Kronos and brother to both Hades and Poseidon. Upon defeating his father, he claimed the right to rule the entire universe. He also fathered many children with not only goddesses, but a number of human women as well."
—Shin Megami Tensei V lore

Zeus is the representative of the Greek branch of Bethel. After watching Abdiel lose to the protagonist during the summit, he decides to break off and become a Nahobino. To his disdain, he finds that the human possessing his Knowledge was killed by a demon, forcing him to wait centuries for another eligible human. The protagonist, seeking the keys to the Empyrean, confronts Zeus for his piece and defeats him. Zeus gives him his key piece before he leaves.

He makes a minor appearance in Artemis' DLC "A Goddess in Training". If the protagonist completes the DLC and has not defeated him yet, he appears as Intimidating Voice and encourages his daughter to continue training and to accompany the protagonist as she could learn much from him. If he had already been defeated, he will also tell her that he had lost to him. If he is in the party when she is defeated, he will ask him to take care of her.

Inside the Empyrean, the protagonist can speak to Demeter to begin the quest "A Plot Revealed" if he had already fulfilled Demeter's previous three requests. Demeter had wished to see Zeus take the throne so he could fulfill her vision, but eventually decides to side with the protagonist for their deeds. Zeus then teleports into the Empyrean and fights them a second time to claim their soul, realizing he could use it as a substitute for his deceased Knowledge bearer. The protagonist defeats him again, prompting Zeus to realize he is thoroughly outmatched, and that even becoming a Nahobino would not help him best the protagonist. He backs down, giving up the race for the throne, and hopes to see what the protagonist will make of the new world. This in turn also unlocks him (and Demeter) for fusion, requiring a special fusion of Demeter, Thunderbird and Dionysus.

He may also speak to an enemy Daemon, in which he becomes annoyed that it does not remember him until he reminds it about Keraunos.

As a boss, Zeus wields several signature skills: Keraunos, a strength-based Electric skill which pierces, Madness Glint, an Almighty attack with random range which can Seal, and Panta Spane, an all-target Physical attack that lowers their Attack and Defense by 1 rank for 3 turns. He may also enhance his attacks with Impaler's Animus and his stats with Luster Candy.

Zenon can be created by fusing Pazuzu and Genbu.

Zeus is summoned by Elizabeth as the culmination of all her work. Upon summoning the Persona, his power proves too great for her (which is evident as Elizabeth's level in the fight is one level lower than Zeus' base level), forcing itself into her and using her body to test the Persona users, seeking for them to gain power of their own will without relying on brotherhood or being a mere lamb in the herd. Both forms of Zeus are used in the battle. After the fight he is overjoyed by the power and strength they show, inviting them to come to his realm one day where glory and battle awaits in a shining world beneath Yggdrasil.

This fight is only available in the post-game, after defeating the final boss, but before starting a new cycle. After defeating him, Margaret tells the myth of Zeus' and Chronos' relations to each other to either protagonist. Margaret also states that Chronos is a symbol of death, Zeus is a symbol of life, and that both teams are closely related to him. Due to the world they are currently in existing due to Chronos' power, Zeus, as a symbol of life, was unable to enter, which is why he had to rely on Elizabeth summoning him to enter the world that kept denying him. The orbs she had the protagonist gather were tools related to him that could bring him into the world made by an icon of death.

After obtaining the Blessed Loincloth from the request, Time for the Finale, Warrior Zeus can be created, the easiest way being a rank-up fusion, by fusing Michael, Satan and Metatron. Zeus can then be created through special fusion by fusing Warrior Zeus and Seth.

The Fearsome Shard obtained by using Zeus in a sacrifice spread allows Theodore to create the best armor in the game, which grants +2 to all stats and has 380 defense.

Zeus is exclusive to the PlayStation version of Black Book and can be obtained by beating his wife, Hera, in BattleNet.

While Zeus is Possessing Elizabeth - 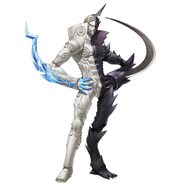 Warrior Zeus as he appears in Persona Q: Shadow of the Labyrinth

Zeus as he appears in Persona Q: Shadow of the Labyrinth

Outline of Zeus and Warrior Zeus 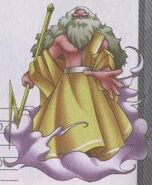