Tom Taylorson
"...I know what I have to do now... Condemn the evil, and hunt them down!"
—Zenkichi Hasegawa, Persona 5 Strikers

Zenkichi Hasegawa is a playable character from Persona 5 Strikers. He is a police inspector from the Kyoto prefecture in charge of investigating the latest Metaverse-related incident.

Zenkichi has black shoulder-length hair, dark grey eyes, and a goatee, with similar facial features to Masayoshi Shido. He wears a set of rimless glasses with a square narrow frame and a black suit with a tie. Underneath he has a light turquoise long-sleeved shirt with golden buttons on each end, and black buttons on each side of the collar. He wears white sneakers.

As a Phantom Thief, Zenkichi wears a pinpoint blindfold as a mask. His attire is a black ankle-length tailcoat with black buckled tassels at the end of the sleeves, a silverish-gray folded up collar up at forehead-length with a large-brimmed fedora-based hat attached on the collar with a long swordfish-like point up at the front of the hat as the tailcoat has large 'V'-fashioned lapels. He also wears a high-collared jacket coat with silver accents with matching double bandolier belts and a matching holster belt where he can keep his firearm on the right side and puts the belt around his waist with another holster belt on the left side, black pants, silverish gray accented, black winkle pickers. His eyes turn blue when his close-up is activated.

While Zenkichi's appearance and demeanor suggests he is untrustworthy, he is actually deceptively intelligent and easygoing, and doesn't conceal any hidden motives. However, Zenkichi also has a comical side to him, having a tendency to panic or overreact when he's caught off guard that usually involves him speaking while shouting in dismay, most prominently seen in Sendai when he scared a child while trying to help him find his mother because he was screaming at his fellow backup officers when they turn him down.

He has some self-worth issues, caused by the death of his wife and his daughter's resulting disdain towards him. Forced to set aside both justice for his wife and his values for his daughter's safety (due to the culprit's connections), Zenkichi subsequently buried himself in his work and moved with Akane to Kyoto in order to be closer to his wife's parents. Upon encountering his daughter Akane's shadow within the Jail (who was by the time heavily brainwashed and not acting like herself), and realizing the depths of her rage stemming from his failure to uphold justice and avenge the victims, he realizes his own hypocrisy in letting the culprit go unpunished for his own convenience. However, upon hearing his Shadow's voice, coupled with the Phantom Thieves' encouragement to stand up for his family, he finally makes a stand to fight by his own code of justice, triggering his awakening as Wolf. He is even capable of convincing his superior, Miyako Kaburagi, to turn on the corrupt and now-powerless Owada, and personally spearheading the punishment of the head culprit, Akira Konoe, who manipulated his daughter in a delusional conquest to wipe out the world's crime.

As a Phantom Thief, akin to his codename, he fights shadows mercilessly like a rampaging wolf, considering it's not bad to go wild once in a while. Even the Phantom Thieves were surprised by his personality change in his first awakening and battle. His speech patterns in battle are akin to a wolf hunting its prey. Despite being less agile than the other Thieves due to his age, he's capable of quickly recovering his stamina, proven by his recovery speed in between after his first battle and before their mission to save Akane within the same day. True to his assigned Priest Arcana, he is the oldest Phantom Thief (and surprisingly, the oldest playable character in the Persona series), and takes his role as the adviser and father figure of the team seriously, despite being the newest member. He is shown to be wise and logical during discussions and strategies, as well towards the targets' shadows when convincing them to change their ways. Unlike the rest of the Thieves, Zenkichi does not let knowledge of the Monarch's trauma give him pause, recognizing that their past does not excuse their current misdeeds.

While native to Tokyo, Zenkichi is currently a member of the Kyoto Prefectural Police and Public Security Intelligence Agency officer. He lives in Kyoto with his daughter Akane. Two years ago, his wife, Aoi, was killed in a drunk driving hit-and-run accident by Chief Cabinet Secretary Jyun Owada. Despite Akane's witness account, Owada avoided legal repercussions due to his connections with Masayoshi Shido, and blame was placed on Owada's secretary for the incident. Zenkichi attempted to investigate on his own, but eventually relented after receiving a death threat against Akane. Soon after the incident, Zenkichi and Akane moved to Kyoto, where Aoi's parents lived (likely for Zenkichi to lessen the burdens of being a single father).

Because of Zenkichi's failure to solve the case behind her mother's killer and his general neglect towards her, Akane came to resent the Police and law enforcement in general, even going as far as supporting the Phantom Thieves of Hearts in fervor because she believes that they go against law enforcement. She also resented her father to an unhealthy degree since she's more often alone at home to the point of referring him by his name. Commissioner Miyako Kaburagi, however, promised him that she may overturn the case as soon as he sets her into power, with the requirement that he must follow her orders at all costs. This led to him working with Kaburagi to use the Phantom Thieves to investigate the new Metaverse incidents during the events of the game in hopes of bringing his wife's killer to justice.

By Strikers, he is the Inspector who was responsible for investigating the mysterious Change of Heart cases all over Japan, targeting the Phantom Thieves under the belief that they were the most probable culprits. He tracks down the Phantom Thieves of Hearts and decides to use them in order to investigate the increasing amounts of change of heart cases, with one that involved the mesmerizing of a talk show host being directly pinned on them. In reality, this was not of the Thieves' work, but those of Alice Hiiragi's. He approaches the protagonist and his friends by chasing off two drunkards, revealing himself to be a police and even exposes a police officer who is tailing them. Zenkichi reveals that the Police had suspected that the change of heart case with the talk show host a day ago being their work and blackmails the Phantom Thieves into working together with him in exchange he will guarantee their freedom from being suspects.

Throughout the investigation, Zenkichi proves to be a surprisingly trustworthy ally for the Phantom Thieves and the investigation on EMMA's mysteries and the data of its clients, even if he's assigned to arrest them when anything goes wrong. Despite his superior's order, Zenkichi grows closer to the Phantom Thieves, especially after they help comfort his daughter's loneliness. He provides them a hiding place when they are chased by people under EMMA's influence and promises that he will fulfill his end of the deal. To his surprise, however, he finds his superior, Miyako Kaburagi orders a fully armed arrest of the Phantom Thieves. Zenkichi tries to discourage her from arresting them as they are innocent. When this fails, he took the place for them to be arrested. Fortunately, he was quickly released from interrogation by Sae Niijima. At the same time, a forced search warrant was issued in Zenkichi's residence, and Akane asks for someone to save her out of a fit, having knew the Phantom Thieves were assisting Zenkichi all along. The EMMA application on Akane's phone responds autonomously without input, and she advises Akira Konoe to ignore police and turn "an associate of the Phantom Thieves" into a King to take the Phantom Thieves' matters on his own hands. Since Akane was the only person who fits the criteria, EMMA brainwashes her and turns her into the King of Kyoto without telling Konoe anything about her. She fakes an SNS message from Akane to capture the Phantom Thieves, and manages to trap them with a heavily brainwashed Shadow Akane, partially also because of their general recklessness. Futaba was the only person who managed to escape because she was too weak to run.

Zenkichi goes to their hiding place and finds Futaba alone. Learning that his daughter has become the Monarch of the Kyoto Jail, Zenkichi enters the Jail with Futaba to rescue the Phantom Thieves who are captured by Shadow Akane, who was now effectively acting as if she were Konoe instead of herself, even ranting about getting the hearts of the Phantom Thieves changed then going after her mother's killer (The exact same plan Konoe ordered EMMA to execute, followed by the man who killed Akane's mother being the same man Konoe is going after). Confronting his daughter's Shadow, Zenkichi finally explains he chose not to pursue Owada to protect her life, but then learns that Akane not only thinks about her mother, but also Owada's secretary who are not protected like she is, shocking Zenkichi who never considered that his daughter would have thought that far. The revelation makes Zenkichi believe that he had failed to protect his loved ones, but the encouragement from the Phantom Thieves reignites Zenkichi's resolve to fight by his own code of justice, awakening his Persona, Valjean. He defeats Akane's Shadow horde and frees the rest of the party. Now able to fight, Zenkichi officially joins the Phantom Thieves.

Once the party reaches the end of the Kyoto Jail, Shadow Akane snaps and attacks the party as they deny her using copies of the Phantom Thieves. Wolf and Sophia fight against Futaba's copy, while the rest take care of their own. After the protagonist defeats his own copy, Shadow Akane collapses and thanks Zenkichi for saving her, then vanishes into light. Despite Zenkichi seeming to be grief ridden over his daughter's "death," he gets over it when Morgana informs him that it's just her Shadow Self, and the real person is perfectly fine. Once the party returns to the real world, the real Akane is actually rendered unconscious after she told EMMA to save her, and she comes into terms with Zenkichi.

While forming a plan to change Akira Konoe's heart, Zenkichi requests Kaburagi's help in his case, promising that Owada would be arrested. Kaburagi granted Zenkichi her permission, returning his police badge and giving him three days to solve the case. Once Konoe's heart is changed and he confessed to his crimes, Zenkichi would later personally arrive to Madicce alongside Kaburagi to arrest Konoe, while revealing to him that EMMA brainwashed his daughter, something that Konoe was initially kept in the dark from. While he couldn't forgive Konoe for using his daughter, he encourages him to atone for his crime and reform as a true hero of justice he dreams of, which touched him.

When EMMA restarts on its own, Zenkichi joins the Phantom Thieves again to fight against the False God Demiurge and shut down EMMA once and for all. Once the Jail of the Abyss ceases to exist, Zenkichi bids the Phantom Thieves farewell as he is going to return to Kyoto once the case is closed. He is last seen waiting outside the Diet building as Owada is arrested and escorted by the police, walking away with a triumphant grin.

During a New Game Plus, Zenkichi will be automatically in the party's default roster, regardless of the plot.

Artwork of Sophia and Zenkichi for P5S's release by Shigenori Soejima

Zenkichi awakening to his Persona 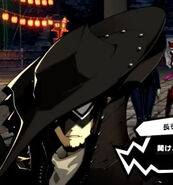 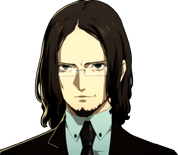 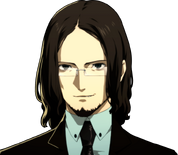 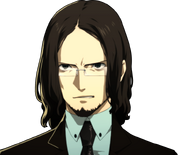 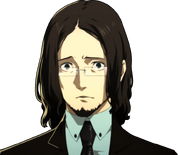 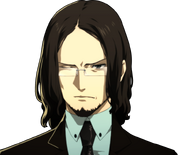 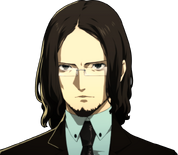 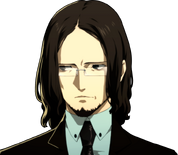 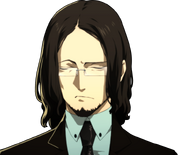 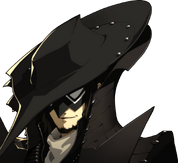 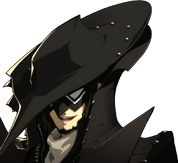 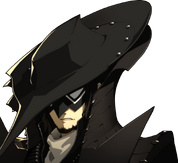 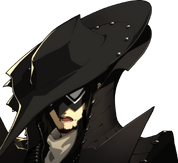 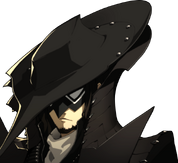 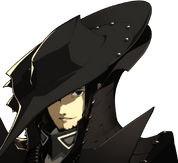 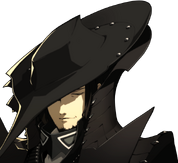 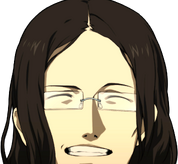 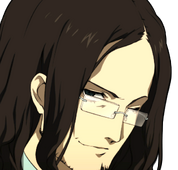 Illustration of Zenkichi and Maruki by Rokuro Saito