Zaou-Gongen (蔵王権現*)?, also known as Vajragarbha, is one of the most important mountain deities of Japan's syncretic Shugendou sects founded by En no Ozuno. They are a diverse tradition of mountain ascetic practices associated with Shinto beliefs, Taoism, magic, supernatural powers and Esoteric (Tantric) Buddhism. After the arrival of Buddhism to Japan in the mid-6th century, the native Shinto Kami were soon considered manifestations of the imported Buddhist divinities. Zaou serves as the protector deity of sacred Mt. Kimpusen Japan's Nara prefecture and is considered the local Japanese Shinto manifestation of three Buddhist divinities: the Historical Buddha, Kannon Bodhisattva and Miroku Buddha, who serve respectively as the Buddhas of the Past, Present and Future. This makes Zaou perhaps the most powerful local divinity of religious mountain worship in Japan.

Zaou is widely venerated in the entire mountain range stretching from Yoshino to Kumano (the cradle of Shugendou practice), but also venerated at numerous remote mountain shrines and temples throughout the country. Despite Zaou's Tantric appearance, the deity is generally thought to be of Japanese origin. Zaou's cult spread throughout Japan from the 11th century onward.

Zaou-Gongen appears in some cultural content of Japan, mostly classical, such as Kuze Noh, where the gods protect Emperor Temmu, 40th Emperor of Japan, against enemy soldiers pursuing him.

Kaneko's design for Zaou-Gongen, much like Ippon-Datara and Melchizedek's, draws inspiration from Todd McFarlane's 1992 comic Spawn. The character Spawn in particular inspiring the chains and skull-like underwear. The design also draws inspiration from Buddhist deity Acala, of which Zaou-Gongen replicates the general pose and design of a particular statue seen here. From this statue, Zaou-Gongen can also be seen replicating the same mudra with his left hand and holding a vajra in his right.

Zaou-Gongen first appears in the quest "The Destined Leader" when the protagonist refuses to hand over Amanozako to the tengu, in which a Kurama Tengu summons him, believing his strength would overpower the Nahobino. Despite his efforts, Zaou-Gongen is defeated, prompting the tengu to abandon bringing back Amanozako to them. Defeating Zaou-Gongen also unlocks him for fusion.

"Repeller of the evil found by En-no-Ozunu at Kinpussen. He perceived the god when training for 1000 days looking for power to save the chaotic world. Buddha, Guanin, and Maitreya appeared before, but it was only when Zaou-Gongen appeared that Ozunu accepted him, believing this god could save the world."
—Devil Summoner: Soul Hackers 3DS compendium

"Repeller of evil found by En-no-Ozonu at Kinpusen. Believed to be a fusion of Buddha, Guanyin and Maitreya, a god who originated from Japan rather than Buddhavacana."
—Persona 4 compendium

"Repeller of evil found at Kinpusen by En-no-Ozunu. Believed to be a fusion of Buddha, Guanyin, and Maitreya, he's a god who originated from Japan rather than the Buddhavacana."
—Persona 5 background

Zaou-Gongen is the ultimate Persona of the Strength Arcana and can only be obtained through fusion in the Velvet Room after completing the Strength Confidant. He is one of four Personas to learn God's Hand, and the second of two Personas to learn Evade Phys. He is the first of three Personas to learn the Blazing Hell skill. Despite learning Cripple, a move that increases the damage of Gun skills by 50%, he does not learn any Gun skills naturally and will need to be supplied with one through fusion to take advantage of the skill himself. When itemized through an Electric Chair Execution, Zaou-Gongen yields a God's Hand Skill Card.

In episode 12, the seventh day, Zaou-Gongen is summoned alongside Nebiros by Yamato Hotsuin in deep grief of Makoto Sako's sacrifice in order to protect the former from Alcor's deadly attack. After Yamato has survived Alcor's self-destruct attack, he uses both demons to block the path of Hibiki Kuze, Daichi Shijima and Io Nitta to buy him time to ascend to Polaris' throne. Zaou-Gongen is engulfed by the void. In the final episode, Yamato fuses Zaou-Gongen and Nebiros together to produce Satan.

"A saint that originated in Japan and is believed to be a fusion of Buddha, Guanyin and Maitreya. Zaou-Gongen was created as a part of Kinpussen belief system before the Nara period."
—Shin Megami Tensei: Liberation Dx2 compendium

Zaou-Gongen as he appears in Devil Summoner: Soul Hackers

Zaou-Gongen as he appears in Persona 5 Royal 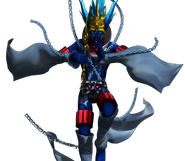 Zaou-Gongen as he appears in Persona Q: Shadow of the Labrinth

Zaou-Gongen as he appears in Persona Q: Shadow of the Labrinth (temporary)

Zaou-Gongen as he appears in Persona O.A.

Zaou-Gongen as he appears in Devil Survivor 2

Zaou-Gongen as he appears in Devil Survivor 2: The Animation

Zaou-Gongen as he appears in Devil Survivor 2: The Animation