Yuzuru Akie, more commonly known as Joe, is a character from Devil Survivor 2.

Joe often has his head in the clouds and can make light of serious situations. He's laid back and lazy, however he will come to someone's aid when he sees them in trouble. Despite his outer expression, he seems to have a surprising amount of wisdom and insight.

In anime version, he appears to get over his girlfriend's death and moves forward. 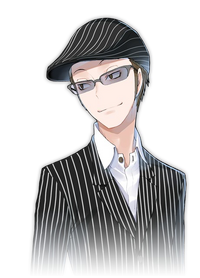 Joe is first seen running away from a pack of demons that he had accidentally summoned. When he runs into Daichi, Io, and the protagonist, he drags the party into his Contract battle. The party, after having protected him and inadvertently killed his contract demon for him, explains the basic concept of the Nicaea site. In the end, he finally becomes a Demon Tamer like the protagonist and tags along with his party.

It turns out that his girlfriend has been hospitalized. He tries to keep a cheery, light-hearted mood at all times to try and keep her off his mind. He hides as much personal stuff away from the other Devil Messengers as possible, including where he really lives. He really lives in Nagoya, although he stays with the protagonist, Daichi, and Io in Tokyo at the end of the day. He cares for his girlfriend, but is too afraid to actually go see her in the state she is in. Because of this, he feels as though he is a bad boyfriend.

Joe is shown to be uncomfortable about going to Nagoya when Makoto announces Daichi's disappearance. He reluctantly leaves with the group and appears eager to leave when nothing seems amiss at first.

Joe's Death Clip is shown later in the day, at Centerling Park, back where the protagonist helped Jungo on the third day. He will be killed by a Pyro Jack that happens to slip behind Ronaldo as he is trying to defend Joe. If the protagonist does not make it to the park by 17:00, Joe will die. During the battle, the player can choose to send Joe and the civilians to either the protagonist or Ronaldo, with Ronaldo being not only the safest choice, but good for Ronaldo should he not be knocked out during the battle.

Joe confronts the protagonist alongside Ronaldo. When Ronaldo is defeated, he notes that he has to pick up the slack on Ronaldo's end. From that point forward, he acts in a more rash manner. After the protagonist defeats Ronaldo and Joe, he requests to join the protagonist and claims he'll be more serious about upcoming events if the protagonist is successful in shifting his interest. Alternately, if the protagonist fails to convince Joe by offending him or being insensitive, he quickly leaves.

In the Egalitarian ending, Joe is seen overseeing a delivery of food from JP's for distribution to civilians.

In the Triumphant ending, Joe is seen walking down a street with his girlfriend who, in this world, survived her illness.

Joe is a member of resistance group that lead by Ronaldo. Hibiki asks Joe whether what Ronaldo has said is true, and replies that while he doesn't whether it was true or not, if the government knew about the disaster but do nothing to help the civilians, he would be angry. When asked why he joined the resistance, Joe said it just happened. He then cheered Hibiki when he feels that the latter is 'gloomy' when pondering about what Ronaldo has said before he left. Shortly after, Ronaldo reveals that Joe lost his girlfriend because of the calamity.

He later appears alongside Otome Yanagiya, offering their help to fight the next Septentrione. When Airi and Jungo fights against three of their members to retake JP's Nagoya branch, he and Ronaldo helps their teammates to retreat. Jungo mistook him as the leader until he points that Ronaldo is the leader. When Airi refuses to listen to Ronaldo, they continues to fight, his demon, Orcus, fighting against Jungo's demon, Neko Shogun. Their fight is interrupted when Phecda appears, defeating their demons with ease despite their cooperation. He could only watch as Phecda kept attacking while Hibiki, Io, and Otome uses their demons to fight back until Yamato appears and easily defeats Phecda by overwriting his demon, Cerberus' abilities.

He, and the entire JP's members and resistance members following through a physical exams. After his examination was done, he finds Daichi intending to peek on Io. He then casually walks to where the women's check up room is and was about to open the door under the excuse that it was an 'accident', but Daichi stopped him. Hibiki then approaches them, asking them what they were doing. Joe says that they were doing a scientific research, but as he said this, Io opens the door and saw them, immediately concluding that they were trying to peek.

When Daichi and Hibiki claimed that Joe was the one responsible, Joe has already ran away, leaving both of them to be scolded. Afterwards, Daichi protests against him for leaving them alone, which he jokingly answers that that is what it's like to be him. Ronaldo meets them and explains his situation before leaving, making Joe say that Ronaldo and everyone are working hard. Daichi, however, says that Joe doesn't look like it. Airi and Jungo finds them and Airi angrily calls them perverts for trying to peek on a woman's check up, Joe just cheerfully commenting that her belly button is cute, embarrassing Airi further.

He joins the Nagoya faction with Ronaldo, Airi, Otome, Jungo, and the entire resistance members during the operation to defeat Megrez who will appear in Nagoya. While waiting for the plan to be out into motion, he wonders who will be protecting Tokyo (later revealed to be Yamato alone).

He died along with Otome, and Ronaldo by Megrez's final attack.

When the world was reset to the beginning by Hibiki's wish, Joe is last seen picking up his girlfriend from the hospital.

Joe's Fate route focuses on Joe's relationship with his girlfriend. He initially is reluctant to go to Nagoya because his ill girlfriend is hospitalized there. He had been using his job as an excuse to not see her, and as a result he views himself as a bad boyfriend. At the protagonist's advice, Joe eventually visits his girlfriend, and she did not get mad at him for his lack of visitation or punctuality. She even repairs his coat for him.

Later on in the route, Joe is seen collecting medical supplies from the rioters to try to help his girlfriend. However, he ends up being too late to make the delivery, and his girlfriend succumbs to her disease and passes away. After lamenting over how things might have turned out differently if he had been there for her more often, Joe eventually resolves to never be late again.

Similar to Keisuke Takagi from Devil Survivor, Joe has excellent Magic and Agility growth, but in the process sacrifices his Vitality. Although Joe is significantly frailer than other Demon Tamers with similar stat distributions (towards Magic and Agility) due to his low Vitality, his Strength eventually becomes high enough to make use of Fire Boost (and eventually Fire Amp) mid-game, making him the fastest, and arguably one of the most effective, user of Fire attacks in the game. At earlier points in-game, Joe also can gain access to and effectively use Curse skills which other magic users can't equip due to their lower Agility. However, Joe will generally struggle early-game due a low amount of damage-inflicting magic skills that can be passed around, in addition to competition with Io, who boasts a greater magic stat and MP at lower levels.

Joe's strategy makes full use of his high Agility, as his Multi-Strike will hit many times, raising the chance of paralyzing its targets via +Paralyze, or shattering anyone petrified by Petra Eyes. If he gets an Extra Turn (likely since at least one of his Multi-Strike hits could crit) while someone is paralyzed, he can follow up with Death Call to instantly kill them. Equip Null Curse so as to completely destroy this strategy, and maybe even any Physical-nullifying skill to prevent him from even damaging you.

Also be sure to crack Pierce+ off him since he is the only enemy in the game who uses this Auto Skill.

Unlike the other two battles, Joe takes up a more defensive strategy to make up for his lack of Vitality. His Barrier autocasts Makarakarn to reflect any elemental magic, while his Dodge makes it hard to nail him with a Physical attack. Use Marksman to neutralize Dodge, or any kind of Almighty attack to bypass Barrier.

"What useless struggling... Us, saving the world?
We're just normal people! C'mon! We can't tell the world that it's wrong."
—Shadow Joe upon spawning

Shadow Joe appears on a team with Shadow Ronaldo and Shadow Airi.

Reunion with Joe, as an Ally[edit | edit source]

Like the others before him, Joe comes with his own demons, but must survive the battle in this event.

Romantic preference from Otomedia.
Add a photo to this gallery

Retrieved from "https://megamitensei.fandom.com/wiki/Yuzuru_Akie?oldid=393780"
Community content is available under CC-BY-SA unless otherwise noted.