Yuzu has shoulder-length auburn hair with a floral bandana keeping it back and brown eyes.

Yuzu has a bubbly personality but can sometimes be uncertain about herself and her power at first. It is also implied that she does not believe in God and thinks it's all the angels' fault. Atsuro calls her "Yoohoo," a name she does not much like. She is also caring and protective of her friends but can be an enemy if the player chooses to rule over the world.

In the Drama CD, it is implied that she might have feelings for the protagonist. In the volume 1 omake of the manga adaptation, Yuzu's classmates also teased her about her affections toward Kazuya and encouraged her to pursue a relationship with him. In game, she shows irritation whenever other female characters are near him. Yuzu also acts embarrassed whenever Atsuro teases her about liking the protagonist, or if the protgaonist chooses an answer implying romantic feelings towards her.

Yuzu Tanikawa appears as one of the protagonist's best friends and one of his initial party members after the demon outbreak, along with Atsuro. She shows certain signs of affection for the main character and tries to be cheerful most of the time; although as the lockdown continues, the attrition damage gets to her and she becomes emotionally drained. Before the outbreak she lived with her mother as an only child, her parents got divorced a year earlier but her mom is still miserable and their relationship became strained.

Yuzu helps the protagonist to break out of the Yamanote Circle on the 6th day when they see Honda attempting to breach the blockade with another demon tamer. After escaping, a lightning bolt strikes the Yamanote Circle, killing everyone left in the lockdown. Angels then descend from heaven, stripping mankind of their free will. Unlike the other endings, this is considered a game over and does not lead to a Cleared game save.

On Desperate Escape Route in the game is the Break the Blockade route, in which the protagonist defeats Remiel and the military and breaks through along with Atsuro and Honda (and optionally, Midori and Keisuke); However this is a bad ending since thanks to this and a chain of events, the demon outbreak spreads throughout all of Japan, leaving Earth's future uncertain.

If the protagonist follows the King of Demons Route, she will leave the party permanently.

Yuzu decides to follow the protagonist in his quest to become the Messiah.

Yuzu remains with the protagonist as they help Atsuro take control of the demons.

Yuzu remains with the protagonist as they help Gin rid Tokyo of the demons.

After escaping the lockdown, they find SDF vans near her house, and upon calling her mother learns she's being taken into custody. With the group branded as terrorists, Yuzu and the others return to the lockdown to evade capture and clean up the demons.

Yuzu's role varies based on the protagonist's decision. If they choose to kill people, she will not rejoin the party, instead she and Midori join Metatron to attempt to defeat the protagonist in the final battle.

If the protagonist decides not to kill anyone, she continually meets the protagonist in private, regretting leaving him before she, with the assistance of Izuna, saves the party from being lynched by a mob by revealing the truth of the lockdown. This causes a chain reaction in which everyone in the lockdown is aligning with the protagonist. She asks to rejoin the party. At the end of this route, she vows to wait for the protagonist after his descent into the demon world and war with god are concluded.

Yuzu aids the Messiah in bringing order to the Yamanote Line. She frequently expresses shock at the angels' more extreme method of judgment. Later, she tries to help convince Naoya to repent as per Okuninushi's ultimatum, noting how he ultimately left the final choice to the protagonist.

Yuzu has high Magic and good Agility, in addition to low Strength and Vitality. This makes her extremely useful later on in the game after the party acquires more powerful magic spells. However, due to her movement range being about 3, Midori and Mari are often better alternatives once either is recruited. However, Yuzu is second to Atsuro in terms of availability, being playable on most routes and most days, making her the prime magic unit early-game and beyond. 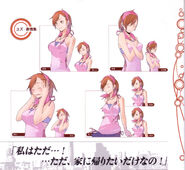 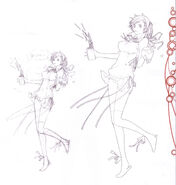 Yuzu Tanikawa on the May 2013 cover of Monthly Shōnen Sirius

The Protagonist and Yuzu's outfits in Shin Megami Tensei IMAGINE 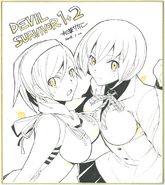 Tribute work of Yuzu with Io from Devil Survivor 2