Yurlungur is a demon in the series.

In aboriginal Australian mythology, the Yurlungur is a great copper snake that is said to bring the rains and thus incite the renewal of life. It is commonly known as the Rainbow Serpent or the Rainbow Snake, because the water where it lives shines like a rainbow. It was believed that if colored light was seen inside a well (likely caused by light reflection) then the Yurlungur was within.

In one story of the Yurlungur, he was awoken from a deep sleep by the smell of one of the Wawalag sisters' menstrual blood. Aroused by the smell of the blood, Yurlungur swallowed the Wawalag sisters whole, however it was later forced to regurgitate them both. The act of the serpent regurgitating them is used in Aboriginal ceremonies to symbolize a boy entering manhood.

"Origin: Australia. A snake god known as the Rainbow Serpent. It is an Australian Aboriginal god with great powers. When angered, it can cause floods and disease. It is also a god of fertility."
—Shin Megami Tensei A-Mode DDS dictionary

Yurlungur acts as one of the two neutral field bosses tied to the Invoke system and will appear in Nakano once every hour during weeks when the neutral alignment dominates the system. After obtaining the rare item he drops, he can be fused by a special double-fusion of Mizuchi and Quetzalcoatl.

Yurlungur is one of the demons used by Prisoner Yokota in the first round of the "Hunter Tournament Finals" Challenge Quest. It can later be encountered as a normal enemy in Ginza. Flynn will need the Demolingual App in order to communicate with it. Yurlungur can teach Flynn the Blast Arrow, Frost Breath and Dekaja skills through its Demon Whisper.

"A snake with a rainbow body from Murngin lore.
He is a fertility deity that controls the weather and resides in a holy pond filled with rainbow-colored water."
—Shin Megami Tensei IV Apocalypse compendium

Yurlungur can teach Nanashi the Rapid Needle, Ice Breath and Diarama skills through its Demon Whisper. It benefits from learning Gun, Ice and healing skills.

"In Oceanian folklore, he is a giant copper python.
A being that transcends good and evil, he governs the weather and is considered a god of harvest. He is known as the "Rainbow Serpent" because the water in the well he calls home is said to shine like a rainbow."
—Shin Megami Tensei V lore

Yurlungur is the ultimate Persona of the Temperance Arcana. He can be fused after maxing out Bebe's Social Link. His base level is 64.

Yurlungur no longer serves as the ultimate Persona of Temperance Arcana, with the role being carried over to Vishnu. He can be summoned once the protagonist reaches level 69.

"A snake with a rainbow body from Murngin lore. He is a fertility deity who controls the weather and resides in a holy pond filled with rainbow-colored water."
—Persona 5 background

Yurlungur is the third Persona of the Sun Arcana and can only be obtained through fusion in the Velvet Room. He is the second of four Personas to learn the Brain Jack skill and the second of three to learn Megido. Yurlungur is the first Persona to learn Revolution and the last of the four Personas that learn Elec Boost. When itemized through Electric Chair execution, Yurlungur yields a Mirrirmina revolver for Makoto Niijima, which has 200 ATK, 92 ACC and increases Makoto's Magic stat by 5 when equipped.

"A beaked serpent that leaves a rainbow trail when soaring the skies."
—Demonary, DemiKids

Known as Kaleidos, he can perform the combo Holy Cross with Pathlite and Dragon Cross with Urboros. Kaleidos also has the power WaterBoost.

"A snake with a rainbow body from Murngin lore.
He is a fertility deity who controls the weather and resides in a holy pond filled with rainbow-colored water. He is a grand entity that transcends good and evil."
—Devil Survivor 2 Record Breaker compendium

Yurlungr appears as a downloadable demon in this game, requiring a fusion of Quetzalcoatl and Baal.

"A great copper snake from Murngin lore. As a god of harvest he controls the weather. He resides in a holy pond filled with rainbow-colored water giving him the name "Rainbow Serpent"."
—Shin Megami Tensei: Liberation Dx2 compendium 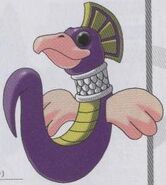 Yurlungur as it appears in Shin Megami Tensei III: Nocturne

Yurlungur as it appears in Last Bible II

Yurlungur as it appears in Last Bible Special

Yurlungur as it appears in Card Summoner