Saeko Shimazu
Yumiko Shirasagi is the heroine of the Digital Devil Story novels by Aya Nishitani and the first Megami Tensei game. She is the titular "Megami Tensei," the reincarnation of Izanami for which almost the entire franchise is named.

Yumiko Shirasagi transfers to Jusho High School after her father's job sends him to Tokyo. She quickly senses something is amiss at the school and notices Akemi Nakajima acting of his own accord during classes. Feeling a connection with Nakajima, she happens to overhear a conversation between him and Ohara and decides to follow them to the Computer Aided Instruction (CAI) room, ignoring a warning to stay away from Nakajima. At 9PM, she follows Ohara into the building that houses the CAI room. She faints upon seeing Cerberus and is brought into the CAI room. Yumiko witnesses Ohara, who is wearing a helmet interface, being raped and impregnated by the demon Loki who partially materializes to impregnate Ohara. All this is overseen by Nakajima who is startled by Loki's attempt to materialize, which appeared as a blue haze. After this incident, Loki demands Yumiko as his next "sacrifice."

A month later Yumiko, unable to comprehend what she witnessed, dismisses the event as a magic trick. She receives a phone call from Nakajima, simply stating "Stay home from school tomorrow." and "He's after you. You should stay away for a while." Despite the warning, she goes to school anyway. Yumiko is forced to the CAI room, where Loki finally becomes able to physically manifest himself. He turns parts of his body into tentacles and molests Yumiko's body while pulling other students into his blob-like body. Ohara, overcome with jealousy and enraptured by Loki, twists Yumiko's head and almost kills her. Nakajima summons Cerberus to battle Loki, but Loki is more than a match for the demon. Using this as a distraction, Izanami used Yumiko's body to badly burn Loki with her powers. Yumiko and Nakajima leap into a dimensional warp, but Loki fatally wounds Yumiko as they escape to Asuka.

Yumiko dies from a combination of her wound and the overwhelming power that Izanami channeled into her. Before dying, she tells Nakajima that she can come back to life if her body was brought to Izanami's tomb. Nakajima meditates and finds the tomb, and with the help of Cerberus, brings Yumiko's body there. Loki is able to locate them by using flies as his spies, and he uses the Fourth Kangyo Bank's computer to transport himself to Asuka in pursuit of Yumiko and Nakajima.

Nakajima makes it to the tomb with Yumiko's body where he encounters Yomotsu-Shikome. Yomotsu-Shikome takes him and Yumiko to the burial chamber and gives Nakajima two mystical spheres. Loki quickly follows them, dispatching Yomotsu-Shikome along the way. Izanami, temporarily resurrected from her original body, is captured by Loki who uses Yumiko's corpse to force Izanami to him. Nakajima summons Cerberus to help Izanami, but Cerberus is no match for the powerful demon. Desperate, Nakajima uses the mystical spheres he received from Yomotsu-Shikome and ignites the pomade covering the floor. It summons the fire god Hi-no-Kagutsuchi, who takes the form of a sword of flames. Taking the sword, he plunges it into Loki's head. His body now a formless mass, Loki attempts to send his heart away to recover, but Nakajima uses Hi-no-Kagutsuchi to destroy the last part of Loki. Izanami brings Yumiko back to life, but keeps Yumiko with her to give Yumiko the power to fight demons.

As Nakajima returns to the human world, Yumiko remains in Yomi with Izanami to learn how to use the great power lying dormant within her. During one attempt to wield her powers, she is distracted by the sound of her mother's voice and falls. After hearing the cause of her failure, Izanami allows Yumiko to return to the human world. Once there, she learns that Ohara, granted demonic powers from carrying Loki's child, had tracked down and killed her family as vengeance for Loki's death. Shortly after, Yumiko arrives at Nakajima's residence, where she finds Nakajima in battle with Ohara and his own mother, who was being controlled by an Apep. Yumiko is forced to kill Nakajima's mother, but flees after seeing Nakajima's reaction. Yumiko chases Ohara into the Soga Forest and uses her power to finish her off. However, at this moment, Seth manages to possess Ohara's unborn child and attach his new blob-like form onto Yumiko.

A week later, Seth has formed into a large tower of flesh with a crucified Yumiko at the heart of the demon, using the magnetite within her to build his form as well as merge the Assiah and Atziluth worlds, calling forth demons from the other side. When Nakajima attempts to cut through Seth, Isma Feed threatens to kill Yumiko, showing Nakajima how Seth crushed her eyes, but Yumiko telepathically tells Nakajima that they need her alive. Yumiko is forced to sit at the heart of Seth's form as he brainwashed the people of the nearby city to come and be sacrificed.

Prior to Charles Feed's plan to re-summon Seth in a satellite in dead orbit, which would render him completely harmless, Nakajima tries once more to get Yumiko out of Seth's body by combining his power with the power granted to him by Izanagi's robe. However, despite his efforts, he was unable to free Yumiko and she was pulled with the rest of Seth's body as it was summoned into space. The magnetic field from the satellite combined with the magnetite in Yumiko's body allowed Seth to form into his full body. Once he realizes that Yumiko is still within him, Seth detaches from the satellite and tries to descend to Earth, however Nakajima and Yumiko are able to destroy Seth by coordinating an attack on the same spot from both outside and in. As Seth's body crumbles, the demons who were summoned alongside him cling to Yumiko and her cross in an attempt to stay in the human world. Yumiko pleads with Nakajima to allow her to fall into the Atziluth realm, as it would prevent any more demons from using her to come through, but Nakajima rescues her before the cross falls through the realms, allowing the door to the Atziluth to remain open.

The battle against Seth stole Yumiko’s sight and left ugly scars on her face. While faithfully nursing Yumiko, Nakajima feels the heavy need to atone for his sins.

Every night, Nakajima and Yumiko, possessed by nightmare demons, are tormented in their sleep. One night, however, Yumiko receives a message from what appears to be Izanami, asking her to come to Asuka. Nakajima is urged by Charles Feed to take responsibility and fight the demon invasion, but before he leaves she asks him to take her to Asuka. Despite the danger, he agrees to take her.

Nakajima and Yumiko are immediately surrounded by Siren and her devotees, who attack Nakajima and call the scarred Yumiko a monster. Yumiko being insulted causes Nakajima to go into a rage, summoning Hi-no-Kagutsuchi and killing a human insurgent. After Nakajima is arrested and put on trial, Yumiko is denied the chance to testify in his defense.

When Nakajima is set to be executed for his crimes, chaos descends and Nakajima is again driven berserk. As Yumiko stands dumbfounded, Izanami's voice finally reaches her. She explains that Lucifer has been sealing her power until then. Receiving Izanami's power, Yumiko is healed instantly and heads towards Nakajima. Nakajima though is so lost in his madness that he brandishes his sword towards her. In that moment, Izanami takes hold of Yumiko’s body and uses her power to attack Nakajima, killing him.

Having returned to his senses, Nakajima draws his last breath in Yumiko’s arms. Full of despair, Yumiko throws all her anger at Izanami whose thoughts cannot reach her anymore. Yumiko takes Hi-no-Kagutsuchi out of Nakajima’s hand and stabs her own throat.

The next day, Izanami, now in Yumiko’s body, carries Nakajima’s corpse in her arms and walks west towards Asuka to bury him.

In the game's prologue, Yumiko is turned into a crystal by Loki and taken to Makai.

Yumiko shown blind in Demise of the Reincarnation 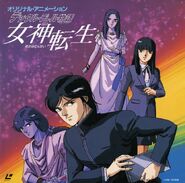 Yumiko introduces herself in the OVA

Yumiko with Nakajima after escaping Loki

Yumiko as she appears on her status screen in Megami Tensei