Teacher of an unknown high school

Laura Post (HD Remaster)[1]
Yuko Takao (default name, can be renamed by the player) is a character in Shin Megami Tensei III. She is a high school teacher and homeroom adviser to the protagonist, Isamu Nitta and Chiaki Tachibana in pre-Conception Tokyo. She is popular with the students because she emphasizes logical thinking over rote memorization.

Beneath her outwardly confident and optimistic attitude lies a jaded soul who is tired of how the people in the world are nowadays: No one takes responsibility for the world's problems, the passion for life was lost in the fast pace of modernization, and individuals who have the drive to compete and become strong are all but gone. Her purpose is to create a world with meaning brought back to people's lives, and sees the Conception as the only way to make it happen.

Even with such feelings, Yuko still could not bring herself to knowingly kill everyone.

Unbeknown to her students, Yuko agrees to work under Hikawa, a member of the Cult of Gaea. She calls on three of them to visit her at the Shinjuku Medical Center, where she feigned illness to cover up the fact that she was assisting Hikawa within its walls to facilitate the Conception. She intentionally stayed hidden so that they wouldn't leave until after the phenomenon came to pass, but had no choice but to interrupt when Hikawa threatened to kill the protagonist after the latter stumbled upon numerous pieces of evidence connected to cultist activity while searching for her in the underground section.

Knowing that he could be trusted, Yuko asks the protagonist to accompany her to the rooftop and witness the end of the world as they know it. She then tells him to stay calm for what is to unfold, and to find her afterwards so she can explain everything, resolving to become his strength.

Yuko disappears from the hospital after the Conception, and would soon be known as the Assembly of Nihilo's Maiden of Creation. Her ostensible role was to be the pillar of the soon-to-be created world of freedom, but finds herself betrayed by Hikawa and serving as a mere tool, her powers used to gather Magatsuhi to bring the Assembly of Nihilo's world of stillness into fruition. The Magatsuhi she initially collected for the Assembly was pooled to power the Nightmare System which brought about the fall of the Mantra Demons in Ikebukuro, the only force that posed a significant threat to them.

Yuko was later moved to the Obelisk, where she was forced to continuously channel Magatsuhi under the watch of the Moirae Sisters until the protagonist (who was now known as the Demi-fiend) saved her. Off-hand, Yuko mentions with bitter jest that she was the one who promised to be the Demi-fiend's strength, and yet he's the one who liberated her from the trappings of her obligation as the Maiden.

While working under Hikawa, Yuko has secretly obtained her own demonic sponsor in a goddess named Aradia, who has no real form and possesses Yuko's body from time to time. Aradia would give the Demi-fiend a portion of her power so he could employ additional demons, and encourages him to build a world of freedom. Aradia also assures the Demi-fiend that Yuko's lost power will return, and that she will be guided into her own path of creation. Yuko would then fade away in a haze of odd shapes that look like Rorschach inkblots, similar to what covers her face when Aradia speaks through her.

Yuko would later take refuge at a supply room around Yoyogi Park. Aradia has been protecting her ever since they left the Obelisk and no longer intends to be the Assembly Of Nihilo's Maiden ever again, realizing that Hikawa's plans were a far cry from what was promised of her. Yuko feels obligated to reshape the world according to her purposes as the one responsible for its initial demise. However, her lack of conviction and composure means that she has not established a Reason yet, thinking that Aradia would be the one to tell her what a world of freedom would be like. Hearing rumors about the Magatsuhi deposit and the Yahirono Himorogi (an artifact that holds tremendous power which can control even gods) in this very park, Yuko feels that obtaining it is the only way for her to be worthy of receiving a Reason, but it is currently in the possession of an evil power and knows that she wouldn't be able to stand a chance. To that end, Yuko proposes that the Demi-fiend retrieve it for her. If he agrees, Yuko will give him the key to enter the park construction site.

Upon returning with the Yahirono Himorogi, Yuko will take it from the Demi-fiend. Aradia will once again speak through her, asking him if he is prepared for the torment, suffering and humiliation that comes with building a world of freedom. His answers will significantly affect the kind of world that is to be. She then goes on about how his envisioned world will not come to pass until he has weighed the other Reasons, to decide whether to side with them or against them. Aradia concludes by saying the one thing she accepts as truth: That the Demi-fiend is the one that is right.

When Aradia leaves her body, Yuko is disappointed that she was still not told what her Reason is, still clueless about what is lacking with her. Despite this, she makes up her mind to leave her hiding place, and see what other Reasons there are.

Yuko would soon be found at the top of the Diet Building, where she tried in vain to stop Hikawa from harnessing the Magatsuhi stored there and later became a sacrifice for Hikawa's sponsor god, Ahriman. Hikawa belittled her and revealed to her why she'd never found a Reason: she had never ceased to run from something, whether it was her perceived mediocrity of the old world, Hikawa or even herself, when a Reason was meant to be the philosophy stemming from the willingness to confront life's adversities and triumph above it all.

As she slowly fades away, Yuko tells the Demi-fiend that even if she failed in pursuing her ideal world, she is not really worried, for she has confidence that he can possibly create the world as he would see fit even without external influences. Yuko passes the Yahirono Himorogi on to the Demi-fiend, for aside from being able to hold a significant amount of Magatsuhi, it also serves as a key to have the Tower of Kagutsuchi descend.

If the Demi-fiend returns Tokyo to its former state, Yuko will be among the many people reincarnated.

In an e-mail message sent to the protagonist, Yuko tells him that she's feeling better and would leave the hospital soon. She also apologizes for her summary judgment of humanity's supposed degeneration, and admits that her jaded views were out of place. She acknowledges the protagonist's strong resolve so much that she became inspired to continue living this life to the fullest, regardless of how the world will turn out in the future. Yuko's message ends with a heartfelt "Thank you." 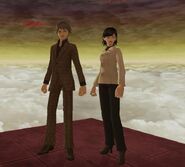 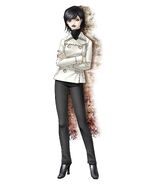