Yuko has short light black hair tied into a short ponytail, and wears a red clip on her left side. She has brown eyes. Her skin is a light brown complexion, implying she may be mixed-race.

At school she wears the standard Gekkoukan High School uniform except she wears long white stockings with red lines. When participating in club activities she wears the Gekkoukan P.E. uniform. When spending time with the protagonist on weekends, she wears a black jacket with a pink top, white belt, navy skirt, and high white boots.

She is a hotheaded student and is the manager of the sports club the protagonist joins. Yuko worries about how much she eats, but attributes it to being active. In the Female Protagonist's route she has a crush on Kazushi Miyamoto if she can not find someone she likes.

Yuko Nishiwaki is the team manager of whichever athletic club the protagonist chooses to join in Persona 3. Completing this Social Link will unlock the Persona Siegfried.

After the protagonist greets her a few times after club meetings, she'll go out to eat with him. Yuko expresses concerns that she eats too much, but attributes it to being so active. Another girl bullies Yuko because a basketball player dated both of them at the same time, without their knowledge. The protagonist can choose to become romantically involved with Yuko, and through their relationship, he helps Yuko learn about what she wants to do in the future after they help coach a group of kids.

If the player chooses to play as the female protagonist, the Strength arcana Social Link is replaced by Koromaru. Yuko then appears as a minor character in different events throughout the year. It is also revealed that she is friends with Rio Iwasaki, as she appears during some of the Chariot Arcana Social Link events and plays a part during the sports retreat at Inaba in early August. She also reveals romantic feelings towards Kazushi Miyamoto, whom she manages, even going as far as saying that she would marry him if she cannot find anyone else.

Yuko makes a cameo appearance along with Rio in November.

Yuko makes a cameo when she leaves the kendo practice earlier. 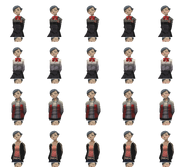 Outfits and emotions of Yuko Nishiwaki

Yuko and the Protagonist in her bedroom.

Yuko with the group

Yuko and Kazushi in the manga adaptation