Samurai
"You are Jonathan, yes? I heard tell of the incident yesterday. You did quite well, coming back safely from that. The lord must be watching over you..."
—Ys, Shin Megami Tensei IV -Prayers-

Ys is a character from Shin Megami Tensei IV -Prayers-.

Ys wears the default Samurai uniform. He has long dark hair with parted bangs. Once he becomes a demon, his scleras turn black.

Ys is described by Jonathan as gentle and a man of good faith.

Ys is a prodigy who is rumored to be the next leader of the Samurai after Hope.

He is first seen in Mikado Castle's Samurai Station, filling in for Hope due to an urgent meeting. Ys praises Jonathan for quelling the Shim O'Key Tezawer village fire and slaying the Pele that caused it. He later joins Jonathan, Walter, Isabeau, Navarre and Asuma after catching them sneaking out at night to attend a Sabbath. Together they discover that the Black Samurai is behind these Sabbaths and is turning people into demons with books. After Asuma slays a human who has turned into a demon, Ys decides to stay behind and investigate. He orders his fellow Samurai to return to the Dormitories. While investigating, he intentionally opens one of the Black Samurai's books to become a demon. 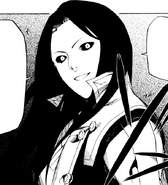 Ys as a demon

Ys and an unknown demon
Community content is available under CC-BY-SA unless otherwise noted.
Advertisement