Yosukesaurus is a boss and a major character in Persona Q2: New Cinema Labyrinth.

Yosukesaurus is a Herbivore Dinosaur that has fur with black and grey patterns on it, and his build is similar to the other herbivore dinosaurs, having a large body, narrow arms and stubby legs. His head is the same as Yosuke Hanamura's, complete with a pair of headphones.

When he transforms to attack the party, Yosukesaurus seems to take more carnivore dinosaur traits, having a sleek build and having a Shadow Yosuke-like color scheme, wearing a red scarf, having a pair of long horns on top of his head and camouflage patterns on his body. In this form, he also has a black head with a white band on the center.

Yosukesaurus is initially not very different from any other Herbivore Dinosaur in the movie, although unlike the others he is willing to befriend the party as opposed to the others that consider them as enemies for no good reason. Even so, if all of the Dinosaurs voted for something, he has to forcefully agree with them no matter how ridiculous the decisions are even if it's against his best interests.

When the other Herbivore Dinosaurs force him to attack the party, he goes berserk, clutching his head constantly and going on a rampage against them. Once the party beats him back to his senses, he is made sane again and has more influence around his surroundings, allowing him to rally his Herbivore Dinosaur friends from their cowardice and help the party repel the carnivorous dinosaur.

Yosukesaurus is the outcast dinosaur in the movie Junessic Land and is the "villain" of the movie which "must be overcome." The party first encounters him eating grass, in which he was attacked by a bunch of shadows while the rest left him and fled. They mistake the dinosaur for the real Yosuke, but he does not understand what humans are and is in fact a completely different entity. The dinosaur is initially unnamed, but is nicknamed "Yosukesaurus" by the party. He befriends the party and is willing to assist them to trap and outsmart carnivorous dinosaurs.

He had read a human book where it is said that there is a "paradise" where no carnivorous dinosaurs can reach, and all of the dinosaurs followed his decision and set their path to there. After the party successfully traps the carnivore dinosaur in an electric cage, he was forced to vote for lynching the party from reality, kicking them back to the cinema despite it was against his will, because he cannot reject the decisions of others just by himself.

Eventually, it turns out that the "paradise" was nothing other than a dead-end clearing at the isle's end. The Herbivore Dinosaurs voted to kick Yosukesaurus because he was supposedly deceiving them, although he did not know about the "paradise's" true nature in the first place. The Herbivores then force him to attack the party since they thought that the humans are the ones deceiving them, despite the party having no involvement with the book. Being thrown into despair by his "friends," he goes berserk and transforms into a carnivorous dinosaur resembling Shadow Yosuke to attack the party, even calling three Herbivore Dinosaurs for help. After the other three dinosaurs are defeated, Yosukesaurus regains his sanity and all of the dinosaurs apologize to the party for their actions, but at this time the carnivore dinosaur F.O.E reaches the farthest clearing. Yosukesaurus confronts the carnivorous dinosaur alone but is swiftly defeated. However, at the same time the other Herbivore Dinosaurs began to listen to him and they teamed up to severely damage the carnivorous dinosaur enough for the party to force it to flee. Yosukesaurus and the other dinosaurs now officially agree to build actual friendships instead of simply acting as a hivemind.

It was later revealed that Yosukesaurus is a cognitive copy of the secondary school Hikari that appeared in Junessic Land. During her secondary school era, she helped a student known as Miyuki and helped her clean her desk when the bullies drew insults and dumped trash on top of it. Hikari asked her out to watch a dinosaur movie which is about herbivore dinosaurs uniting their strength to rescue their friends from their carnivorous dinosaur oppressors in a pinch situation. She agreed but the other girls refused in order to avoid Miyuki, and on the next day, Hikari herself became a target for the bullying. Initially her friends only wanted to lynch Miyuki out of their group because they did not want to be involved with the bullies in the school, but Hikari did not want anyone to be lynched. Instead, she just wanted the girls to continue to be friends with each other. Her friends responded by lynching her out of egotism and Miyuki was forced to join in against her will, because the other friends have the number advantage,and all of the girls considered her an outcast for not agreeing with the hivemind. The traumatic events resulted in Hikari barely having any friends for the remainder of her student life and simply mentioning having actual friends triggers her to shut down.

Just like the secondary school Hikari, Yosukesaurus wanted to protect his friends from their oppressors, but ended up becoming alienated and outcast by them due to their selfish self-preservative instincts and the resulting inability to rally an ignorant mass, making him a target for both his oppressors and his "friends," with the latter group driving him into despair by threatening to lynch him out from their group.

Yosuke's form was simply an actor for the movie that is given form by the Investigation Team's perception of social outcasts, and so the cognition was able to take on a completely different form from its host, only inheriting her behavior and thoughts.

In the Depths of the Theater District, one of the Negative Film projectors creates a monochrome berserk Yosukesaurus to defend itself. This Yosukesaurus is completely malevolent unlike the real copy and embodies herd mentality, saying that it's better to follow the crowd regardless of whether it is right or wrong. Unlike the original Yosukesaurus, this Yosukesaurus will not summon Herbivores as backup.

Right before the final battle against the mastermind, the edited version of the movies displays that the Herbivore Dinosaurs had built a real friendship with Yosukesaurus and they began to respect each other's differing opinions. Yosukesaurus attempts to conduct a discussion among the group, and he decides that while it may be less convenient than majority rule, it's more fun to decide matters this way.

When the Investigation Team returns to reality and Junessic Land begins to broadcast on the Dojima Residence TV, Yosukesaurus is implied to appear in the movie. However, none of the P4 cast recognize him, as their memories of the adventure are wiped.

Yosukesaurus starts the fight with no weaknesses and a resistance to Wind. He attacks with wind and physical skills. He can also use Sukukaja on himself, which can raise his agility and make it difficult to land a hit. If the buff is dispelled he will respond with Double- and Triple-Sukukaja, which are even stronger variations of this skill. The fight is relatively straightforward until he loses 1/4 of his HP and starts clutching his head. When this happens, he gains a weakness to Electricity and can be exploited for easy Boosts.

Once he begins this second phase, the other Herbivore Dinosaurs begin joining the battle, positioned in the back. They can assist Yosukesaurus by buffing his attack with Nasty Taunt, or by using Disarm and Makajam to disable the party. If Yosukesaurus gets buffed with Nasty Taunt, he will briefly stop clutching his head and attack the party of his own volition with skills like Tempest Fang and Magarula; otherwise, he only acts if struck.

Once Yosukesaurus falls to half health, the objective switches to defeating all Herbivores on-screen. Yosukesaurus himself cannot be killed; he will continue to fight even if his HP is 0. If Yosukesaurus is still above half health and no Herbivores are present, another will join the fray. The Herbivores are, from left-most to right-most, weak to Psy, Nuclear, and Ice skills respectively. Between these three elements, the Herbivores will resist what the others are weak to. None of the enemies in this fight can be knocked down for an All-Out Attack, despite having weaknesses.

Party members like Yosuke himself and Morgana are good assets as they resist Yosukesaurus's main attacks. For the second half of the fight, party members like Makoto, Haru and Chie are great for hitting the Herbivores' weaknesses. Yosuke and Morgana are still good assets in this phase, as Yosuke can confuse the enemy lines with Tentarafoo and Morgana can provide healing when needed. Wind weaknesses among the party can also be covered with Wind Screen, available from High Pixie at this point in the game. Titania's Healing Hand skill will increase the effectiveness of healing skills used on the party. The Confusion Hat accessory that can be unlocked in the shop will help resist Confusion from the Tentarafoo skill.

There will be a forced Tyranniqueen encounter after defeating him. However, the party will have their HP and SP refilled for this fight. This Tyranniqueen is also a lot less aggressive, and will attempt to escape the battle if brought to low HP. There are no rewards for actually defeating this Tyranniqueen.

Yosukesaurus in the end credits 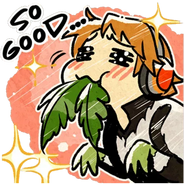