Yoshitsune, also known as Minamoto no Yoshitsune, is a demon in the series.

Minamoto no Yoshitsune (源 義経), born Ushiwakamaru (牛若丸), was a general of the Minamoto clan during the late Heian and early Kamakura period. Yoshitsune was born in 1159 during the Heiji Rebellion (平治の乱), a civil war against the rivaling Taira clan led by Kiyomori (平 清盛). This rebellion claimed the lives of his father Yoshitomo (源 義朝) and brothers. He was put under the care of Kurama Temple. Legend says that he was trained by the mythical Kurama Tengu during this stay.

Yoshitsune wound up under the wing of Fujiwara no Hidehira (藤原 秀衡), the head of the Fujiwara clan. He was a skilled swordsman, as he defeated the legendary Benkei (弁慶) in a duel, who served under Yoshitsune after his loss. Yoshitsune was participating in the conflict known as the Genpei War (源平合戦), that saw his clan versus the Taira clan and the victory of the first, where he slew his rivaling cousin Yoshinaka (源 義仲) who was imprisoning the emperor. Yoshitsune then served the emperor until he was forced to flee back to Fujiwara for protection as he was being pursued by his third elder brother Yoritomo (源 頼朝) who saw him as a political threat. He was betrayed and forced to commit suicide along with his wife and daughter by Hidehira's son who feared Yoritomo.

Minamoto no Yoshitsune has been popular in Japanese culture due to his appearance as the main character in parts of Heike Monogatari (平家物語). The term Hangan-biiki (判官贔屓, sympathy for a tragic hero) stems from the title of Hangan, which Yoshitsune received from the imperial court.

Yoshitsune is summoned by Raidou Kuzunoha XIV for the physical skill, Yoshitsune Show-Up, both as a boss and a party member.

Yoshitsune was a central figure in the 2013 Summer event where players could obtain and upgrade variants of him named after different landmarks in his life. The final variant in this chain was Hassotobi Yoshitsune, which learned the signature spin move Hassotobi. He returned as a minor NPC as the object of Moh Shuuvu's affections in the 2014 Valentine's event and as player support in the White Day event. His plug-in and non-variant form were added during the seventh anniversary event, where players could fuse him in a special double-fusion of Tokisada and Daisoujou.

He was added as a permanent obtainable plugin with the implementation of Mount Kurama, along with the weaker variants from the initial event.

Like most members of the Famed race, he can only be obtained through a fusion accident. Fusing a KO'd Foul demon, such as Night Stalker with a KO'd Yuki Jyorou will yield a high chance of a fusion accident that can result in Yoshitsune being summoned. Yoshitsune can teach Flynn the Javelin Rain and Bad Company skills through his Demon Whisper, along with any skills inherited from the demons that were fused.

Yoshitsune's armor, Genke Rindo (divided into helmet, chest and legwear), is available for sale at the secret shop in Ginza. It is one of the highest-level sets of armor in the game, reflecting Gun attacks and nulling Light and Dark at the cost of a weakness to Force attacks.

"A Japanese general of the Genpei War near the end of the Heian era and start of the Kamakura era.
Also known as Ushiwakamaru, he is said to have learned the art of war from the Mt. Kurama Tengu. On joining his half-brother Yoritomo's army, he defeated the Taira one by one, finishing them off at the battle of Dan-no-ura. He was later pursued by Yoritomo's army, only to kill himself at Koromogawa."
—Shin Megami Tensei V lore

Yoshitsune is a demon of the Wargod race and can be obtained through fusion. His moveset focuses on Physical skills, including his signature Hassou Tobi skill, and two passive skills.

"A Japanese general of the Genpei War near the end of the Heian era and start of the Kamakura era.
Also known as Ushiwakamaru, he is said to have learned the art of war from the Mt. Kurama Tengu. On joining his half-brother Yoritomo's army, he defeated the Taira one by one, finishing them off at the battle of Dan-no-Ura. Later, he was pursued by Yoritomo's army and killed himself at Koromogawa."
—Devil Summoner: Soul Hackers 3DS compendium

Yoshitsune can be obtained if Zeed is between level 60 and 80 and fused with a Hachiman during a new moon.

"A Japanese general of the Genpei War near the end of the Heian era and beginning of the Kamakura era. Also known as Ushiwakamaru, he is said to have learned the art of war from the Mt. Kurama Tengu."
—Devil Summoner: Raidou Kuzunoha vs. The Soulless Army devil chart

Yoshitsune appears as a secret demon. He can only be summoned after he is defeated on the 4th floor of the Training Hall. Yoshitsune can be summoned once Raidou reaches Lv. 36 or above.

Yoshitsune appears as a Persona of the Tower Arcana. He is available to be summoned once the protagonist reaches Lv. 75 or above. Yoshitsune's fusion prerequisite requires the protagonist to perform a pentagon fusion spread that consists of Hachiman, Masakado, Okuninushi, Hitokotonushi and Shiki-Ouji in the Velvet Room. He cannot be fused before July 10th, as pentagon fusion would not be unlocked by then.

Yoshitsune bears the distinction of being one of the two Personas that have access to the most potent status-buff skill, Heat Riser. Furthermore, he learns the strongest area-based, multi-hit type Physical based attack, Hassou Tobi, also being the strongest physical move in the game.

Yoshitsune is the only Persona with two dedicated Fusion Forecast enhancement schedules to give him new skills when he is created on specific dates. December 19th will grant him the Arms Master skill (this skill is also inheritable from Masakado), while December 24th will give him the unique skill Debilitate.

In the True Ending special, Margaret summons Yoshitsune to attack Yu and help him regain confidence to fight against Izanami-no-Okami. Yoshitsune's attacks were blocked by Rakshasa of the Strength Arcana and Yamata-no-Orochi of the Moon Arcana.

Yoshitsune is one of the Personas used by Margaret.

"A Japanese general of the Genpei War near the end of the Heian era and start of the Kamakura era. His bold ingenuity and ruthless skill with a blade are still praised in Japan today."
—Persona 5 background

Yoshitsune is the seventh Persona of the Tower Arcana and can only be obtained through advanced fusion in the Velvet Room. The advanced fusion recipe for Yoshitsune is unlocked once the protagonist reaches rank 5 of the Strength Confidant with Caroline and Justine. Okuninushi, Shiki-Ouji, Arahabaki, Yatagarasu and Futsunushi are required in order to perform the fusion. As Futsunushi is the ultimate Persona of the Magician Arcana, Yoshitsune can only be obtained following the completion of Morgana's Confidant in the true ending route.

Yoshitsune is the first Persona to learn Brave Blade and one of the three Personas to learn Last Stand. He is also one of four to learn Fast Heal and Elec Amp. He once again learns his signature Physical skill, Hassou Tobi. When itemized through Electric Chair execution, Yoshitsune produces the Usumidori sword for Yusuke Kitagawa, which has 292 ATK, 88 ACC and adds the Fear (high) effect to Yusuke's attacks. Yoshitsune is also a required Persona for the advanced fusion to summon Chi You.

The Shadow of Minamoto Nao takes the form of Yoshitsune. He is immune to Physical, resists Fire and repels Electricity and Bless skills.

Shadow Minamoto has access to Hassou Tobi, Charge, Maziodyne, Heat Riser, Rebellion and Rakunda. A charged Hassou Tobi is very lethal, so the protagonist must bring a Persona that blocks Physical skills.

When itemized during a fusion alarm, Yoshitsune becomes Usumidori R, which has a high chance of inflicting Fear.

Yoshitsune is seen summoned by Ren in the fight against Thor in Niijima's Palace and later against Shadow Shido. He severely damaged him with a Hassou Tobi, allowing Ren to summon Alice to damage him to the point that he changes form.

"A Japanese general of the Genpei War near the end of the Heian era and start of the Kamakura era. Also known as Ushiwakamaru, he is said to have learned the art of war from Mt. Kurama Tengu. On joining his half-brother Yoritomo's army, he defeated the Taira one by one, finishing them off at the battle of Dan-no-Ura. Later, he was pursued by Yoritomo's army and killed himself at Koromogawa."
—Devil Survivor 2 compendium

Yoshitsune can only be summoned by fusing Osiris and Take-Mikazuchi.

"A Japanese Shogun in the late Heian era. The younger brother of Minamoto No Yoritomo, and well known for his childhood name Ushiwakamaru. With his brother, he won great glory as he finally defeated the Taira clan at the battle of Dan-no-Ura."
—Shin Megami Tensei: Liberation Dx2 compendium

Yoshitsune as he appears in Card Summoner

Yoshitsune in Devil Summoner: Raidou Kuzunoha vs. The Soulless Army

Yoshitsune as he appears in Devil Survivor 2

Yoshitsune as he appears in Raidou Kuzunoha vs. The Lone Marebito

Yoshitsune as he appears in Persona 4 The Animation

Yoshitsune's face from Persona 4 the Animation 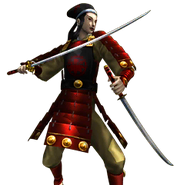 Yoshitsune as he appears in Persona Q: Shadow of the Labyrinth

Yoshitsune as he appears in Persona 5 The Animation