Yatagarasu is a demon in the series.

Yatagarasu is a great divine bird that represents the will of heaven or divine intervention in human affairs in in Japanese mythology. Although Yatagarasu is mentioned in a number of places in the Shinto canon, there is very little explanation, and much of the material is contradictory

This great crow was sent from heaven as a guide for Emperor Jimmu on his initial journey from the region which would become Kumano to what would become Yamato. It is generally accepted that Yatagarasu is an incarnation of Taketsunimi, but none of the early surviving documentary records are quite so specific.

None of the sources mention about it having three legs either, and it may have been influenced by the Chinese sun bird Huoniao.

"Origin: Japan. A three-legged bird who lives in the sun. When Emperor Jimmu was on his eastern voyage, it descended from heaven to guide him. Kamotaketsunumino-Mikoto took this form when he descended on Amaterasu's orders."
—Shin Megami Tensei A-Mode DDS dictionary

"A divine creature in Japanese mythology. They are three-legged ravens sent by Amaterasu to help humans. It is said that they helped Emperor Jinmu claim victory."
—Shin Megami Tensei III: Nocturne compendium

"A divine being worshiped as an incarnation of the sun. It was sent to the earth by the Japanese sun goddess Amaterasu. It takes the form of a pitch-black crow with three feet. As a very high-ranking deity, those who are not worthy are said to be driven mad by the very sight of it.
Yatagarasu is also a god of guidance. A well-known story in Japanese mythology tells of Amaterasu sending Yatagarasu to guide Emperor Jinmu to victory in his conquest of the East and return him safely to his home of Yamato.
Crows are revered as incarnations of the sun. Their black bodies are said to represent the black color of sunspots.
Yatagarasu is worshiped as a symbol of the Kumano Hongu Taisha shrine. This custom is believed to stem from the fact that crows have long been revered as agents of the gods in the Kumano region."

"A divine creature in Japanese lore. They are three-legged birds sent by Amaterasu to help humans.
They are said to have helped Emperor Jinmu claim victory."
—Shin Megami Tensei IV compendium

Yatagarasu can teach Nanashi the Maragion, Grand Tack and Maragidyne skills through its Demon Whisper. It benefits from learning Gun and Fire skills.

"A divine creature in Japanese lore. They are three-legged birds sent by Amaterasu to help humans.
It is said that they helped Emperor Jinmu claim victory."
—Soul Hackers 3DS compendium

The Yatagarasu represents the divine will and its orders are communicated by its representative, the Herald of Yatagarasu. Yatagarasu itself is never seen, although the three pines seen in the Kuzunoha Training Hall may symbolize Yatagarasu.

At the end of Soulless Army, it can be assumed that the black bird observing Raidou at the end is, in fact, Yatagarasu.

"A divine creature in Japanese myth. They are three-legged birds sent by Amaterasu to help humans. It is said they helped Emperor Jinmu claim victory."
—Persona 4 compendium

This Persona of the Sun Arcana can be acquired by Shuffle Time in either the Void Quest or Secret Laboratory dungeons. It can also be created by fusion.

To achieve the 7th rank of the Empress Arcana Social Link, the protagonist must present Margaret with a Yatagarasu that possesses the skill Megido. There are two methods of achieving this fusion; one requiring two fusions, the second requiring only one.

The first can have Tao Tie be fused with Cu Sith, which will create an Ares with Megido. Then fusing the Ares with a Black Frost will create the required Yatagarasu. The second method involves fusing a level 39 Samael with a Mothman for the same effect.

"A divine creature in Japanese lore. They are three-legged birds sent by Amaterasu to help humans. They are said to have helped emperor Jinmu claim victory."
—Persona 5 background

Yatagarasu is the sixth Persona of the Sun Arcana and can only be obtained through fusion in the Velvet Room. It is one of four Personas to learn the Makara Break skill and the first Persona to learn Mediarahan. It is one of three Personas to learn the Last Stand and Wind Break skills. Yatagarasu is the sole source of the Null Wind skill. When itemized through Electric Chair execution, Yatagarasu produces the Black Wing Robe unisex armor, which has 220 DEF, 20 EVA and adds the Reduce Nuke damage (med) effect to the wearer. Yatagarasu is one of the Personas required for the advanced fusion recipe to summon Yoshitsune.

Yatagarasu is instead the fifth Persona of the Councillor Arcana in Persona 5 Royal.

Yatagarasu is the ultimate Persona of the Sun Arcana. It is found as a both a common and mini-boss Shadow in the Tree of Knowledge Jail. A particularly powerful Yatagarasu can be found in the Kyoto Jail.

Known as War Crow, he can perform the combo Crosswinds with Mega Cat. War Crow also has the power WindProof.

"A divine creature in Japanese lore. They are three-legged birds sent by Amaterasu to help humans and are said to have helped Emperor Jinmu claim victory. Because of their divinity, some without faith are driven mad at their sight."
—Shin Megami Tensei: Liberation Dx2 compendium 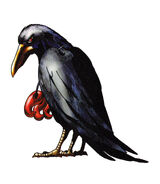 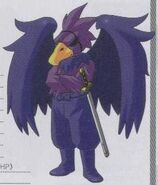 Yatagarasu as it appears in Last Bible II

Yatagarasu as it appears in Last Bible Special

Yatagarasu in Persona 5 Royal
Community content is available under CC-BY-SA unless otherwise noted.