Honda is an honest man who works for a living to raise his son. However, things go downhill after his son needs an important surgery. His sanity is put to the test as he endures the events of the lockdown. At the end of most routes, Honda goes insane with the demons' power.

Honda is an office worker turned demon tamer who is desperately trying to escape the Tokyo Lockdown so he can be by his son's side during his operation. He regularly teams up with Kaido during battles. On Day 3, it is revealed that he was sent to collect a COMP for higher-ups that wish to harness the demons' power for shady purposes.

On Day 6, Honda will attempt to go through a lightly-guarded part of the lockdown near the Ueno Station. If he succeeds, the result will be the early bad ending where everyone in the lockdown is murdered by God's Thunder and everyone else becomes subservient to the angels.

In Desperate Escape's Route, after the protagonist's group defeats the angels and escapes, Honda meets up with the group to reveal that his son didn't live long enough, and that he has come to understand that the government and humanity as a whole are worthless. He starts to use the demons to destroy everything.

Honda does not appear in the other 7th day routes.

Honda has an expanded role in each of the new 8th day routes.

Honda's team kills all the SDF soldiers, enabling his escape. They later meet up with him. Though grieving the death of his son, he still considers the group to be heroes for getting him past the lockdown and allowing the demons to run rampant. This indirectly causes the party to be branded terrorists by the SDF.

While insane, Honda mistakenly believes that he can revive his son by finding and using the strongest demon's power. During the final battle against Belberith, he arrives atop the Hills builder, and the violent god agrees to become Honda's patron now that he has no need for the Shomonkai Founder. During the fight, Belberith summons Baphomet to keep him alive until the demon is taken down. Honda requests more power from Belberith, who promises to rejoin him with his son and his wife in hell by killing him brutally, thus ending Honda's life.

Honda is still trapped inside the lockdown, not knowing anything about his son. He is found by the group, where Naoya suggests that he has the potential to convince people to aid them/stay away from them. He is last seen convincing the people from either aid them in their cause or reconsider from getting in their way.

Later, Loki tricks Honda, telling him about his son's death and making him believe that he is capable of bringing back the dead just to get him to help battling the party. After Loki's defeat, Honda rages hopeless and powerless.

Honda desperately tries to get a COMP outside the lockdown, despite the orders from the angels, so that the company he's working for can pay for his son's surgery. His efforts to save his son flatter Susano-o, who helps him to overcome the rule of the angels and the Messiah. He briefly receives Okuninushi's blessing to defeat the Messiah, but his group gets defeated.

Later, he regretfully informs the group of his son's passing, but he helps them to understand the story between Cain and Abel more with some of his opinions regarding the incident. After this, he asks to be left alone.

Honda shows up with Kaido and cooperate with the party in defeating the demons there.

Honda and Kaido are encountered here, with Kaido challenging the party to see who can defeat more demons.

Kaido and Honda are found attacking civilians here and must be defeated.

Honda is found here attempting to escape from the lockdown. The battle proceeds to where Honda can be attacked and must be defeated - if he escapes, the Early Bad Ending will occur. 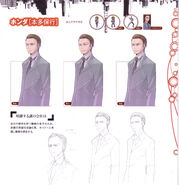