View source
watch 02:34
Fire Emblem Warriors: Three Hopes - The Loop
Do you like this video?
Play Sound
"You are all from Yasogami High, eh...? Aaah, a high school of many gods."
—Mr. Edogawa, Persona 4

It is located within the rural town of Inaba. Yasogami High is split between two buildings; the Classroom Building and the Practice Building. The Classroom Building has three floors, with each floor corresponding to the school year; first years on the first floor, second years on the second and so on. The Practice Building has two floors, and each floor house rooms for different school clubs and activities.

A replica of the school was recreated for the P-1 Grand Prix. The school is in chaos due to the tournament taking place and the student council president attempts to control the situation, sometimes asking for help from the Investigation Team.

When Inaba is covered in the Red Fog, Yasogami High transforms into a tower similar to Tartarus. The Persona Fragments gather at the top of the tower, where the summoning of a god shall take place. The areas inside vary considerably, from the areas seen inside the replica of the school form the P-1 Grand Prix, to locations from Port Island.

The Investigation Team and S.E.E.S are sent to an alternate world outside time in the form of Yasogami High. Much like the Yasogami the Investigation Team is from, the school is housing a Culture Festival, with four of the clubs acting as labyrinths filled with shadows. Phantoms in the form of humans fill the school, performing the same actions and saying the same words over and over.

The false Yasogami high is the main setting and hub of the game and it contains facilities that accommodate its guests, namely a Velvet Room, a Nurse's Office and a Handcrafted Workshop. The Velvet Siblings take charge of these facilities. In addition, a Clock Tower exists in this Yasogami High, which does not exist in the real world high school. The hallways of the school act as the main hub for the party's meetings.

Many of the displays happening at the school are visited by the groups during stroll events. Eventually they learn the school was created from Rei's memories thanks to Zen's power as Chronos, making it an alternate reality inside the underworld. Should Rei be erased, the school would likewise vanish and anything found in the world during that time would likewise be erased, removing them from the natural flow of time which would rewrite history to remove their birth and all memories of them. After the Clockwork God is defeated, the Persona users return to their own realities while Zen and Rei depart into the Sea of Souls, and the false Yasogami High presumably has served its purpose and vanishes.

Yasogami in the intro of Persona 4

Concept design in The Animation 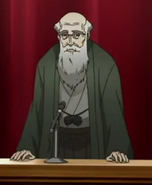 The Principal in The Animation

Top of the Yasogami tower in Persona 4 Arena Ultimax 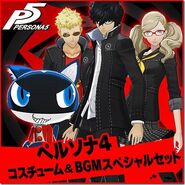 "Yasogami" (八十神) is a group of male sibling gods appear in Kojiki and Izumo no Kuni Fudoki. The gods are sired by the Kunitsu Amenofuyuki (天之冬衣), who also birthed Onamuchi. Yasogami's story involves their futile proposals to Princess Yakami (八上比売). The Hare of Inaba instead pronounces that her groom will be their brother Onamuchi who has rescued the injured hare not long ago. Thus the gods conspire to slay him repeatedly in a fit of jealous rage.

"Yaso" is rendered as the kanji "eighty" (八十) which is more commonly pronounced as "hachi-juu." It is just a metaphor for "many" instead of referring to the exact number (see also Yaso Magatsuhi), but many translations interpret the term literally and address the gods directly as "eighty gods." Neither the exact amount nor the individual identities of the siblings are known.