Yamata no Orochi or Orochi, is a demon in the series.

The Yamata no Orochi (八岐大蛇*)? is an eight-headed and eight-tailed serpentine dragon with an enormous body reaches across eight valleys and eight hills that appears in Japanese lore, with eyes as red as winter cherries, and plant matter like club moss, cypress, and cedar growing all over its body

While Susano-o is in exile from the heavens after a fight with his sister Amaterasu, he finds a Kunitsukami couple and their daughter crying by the river. They explain their sadness to him, that every year for the past seven years, the Orochi comes to devour one of their daughters. This year, they must give up their eighth and final daughter, Kushinada-Hime.

To save her, Susano-o proposes marriage to Kushinada. When she accepts, he transforms her into a comb which he can then carry in his hair. Kusinada's parents must brew sake, and refine it eight times. They must also build an enclosure with eight gates, each of which includes a vat of sake.

When the Orochi arrives, he is lured in towards the sake, and dips each of his heads into one of the vats. The drunken beast is now weakened and disoriented, allowing Susanoo to quickly slay it with a Totsuka no Tsurugi named Ame-no-Habakiri. As Susano-o cuts the monster into pieces, he suddenly breaks Ame-no-Habakiri on one of its tails. Using his broken blade, he uncovers a great sword that had grown inside the Orochi. This blade, the Ame-no-Murakumo-no-Tsurugi, is later presented to Amaterasu as a gift to reconcile their dispute.

"Origin: Japan. A mountain-sized serpent with 8 heads. It's said that trees and moss grow on its body, red eyes, and festering belly. It was defeated by Susano-o when Kushinadahime was about to be sacrificed to it. The sword that emerged from tis belly was called Ameno Murakumo."
—Shin Megami Tensei A-Mode DDS dictionary

Yamata no Orochi appears as a special boss in Ueno's Kuchinawa Cave, summoned by connecting with all the plasma on the field and then killing the Onamuchi field boss. He also acts as the final boss of the Virtual Beach's Izumo island, as well as a regular Daily Mission boss for players over level 95. By offering golden sake, players are able to summon a stronger variation for a chance to obtain the ability to fuse him. He is a special triple fusion of Quetzalcoatl, Nidhoggr and Raja Naga and learns a special fire affinity spin skill at level 98.

Summoned by the Terminal Guardian to fight Flynn in the Domain at the Shibuya Terminal.

As a playable demon, Orochi can be found in the wild at Infernal Camp Ichigaya or created through fusion. There are no special requirements to summon him, apart from Flynn being at least level 60. Orochi can teach Flynn the Bufudyne, Megaton Press and Estoma Sword skills through his Demon Whisper.

His compendium entry is actually that of Hoyau Kamui, who does not even appear in this game.

Orochi is needed for the challenge quest "u have a guest!!!," in which Nanashi must fuse Yamata-no-Orochi and present him to Take-Mikazuchi in the Fairy Forest near the base of the great tree. Take-Mikazuchi will then use the Ame-no-habakiri to kill Orochi, with the blade transforming into the upgraded Ame-no-murakumo.

Orochi can teach Nanashi the Bufudyne, Agidyne and Megaton Press skills through its Demon Whisper. It benefits from learning Physical, Fire, Ice and healing skills. Unlike most demons, its attack also strikes all enemies present.

" A giant snake with eight heads that the hero Susano-o defeated to save Kushinada-Hime.
The legendary sword Ame-no-Murakumo-no-Tsurugi, also known as the "Sword of Kusanagi," was said to have emerged from its belly."
—Shin Megami Tensei V lore

Orochi serves as the guardian of the Water Prism in the alternate reality of Dark Harumi-Cho, which Raidou must collect in order to complete the Amatsu Kanagi and return to his own reality. Upon entering Dark Harumi-Cho, Raidou can meet a Shouten that states he and his brothers have occupied the area in order to balance out Orochi's power. Should Raidou be able to best Shouten's companions and present him with 8 Purity Charms, Shouten will be convinced of Raidou's power take Raidou to where Orochi is waiting in order to confront him.

Orochi will be aided by one lone Jack Frost and several Mokoi during battle with him, and he will continually summon replacement Mokoi as they are defeated. While the Mokoi pose a minimal threat, they will increase Orochi's attack power and their Winged Fury attacks can knock Raidou and his demons down if they are caught off guard while attacking Orochi, leaving them open to Orochi's attacks.

After being defeated, Orochi relinquishes the Water Prism before fading away.

"A giant snake with eight heads that fell at Susano-o's hands. The sword that came out was the Ame-no-murakumo-no-tsurugi, also known as the Sword of Kusanagi."
—Persona 3 FES compendium

Yamata-no-Orochi represents the bond between Yu and his classmate Ai Ebihara. After completing his Social Link with Ai, Yu fused the necessary Personas to summon Orochi, using its power in the battles against Shadow Kanji and Shadow Mitsuo.

In the True Ending special, Yamata-no-Orochi was summoned to defend Yu against Yoshitsune's attack, as well as bring a message of support for Yu from Ai.

"A giant snake with eight heads that Susano-o defeated to save Kushinada-Hime. The legendary sword Ame-no-Murakumo-no-Tsurugi, also known as the "Sword of Kusanagi," emerged from its belly."
—Persona 5 background

Yamata-no-Orochi is the third Persona of the Judgement Arcana and can be found as a Shadow in Shido's Palace and the Depths of Mementos, with the title "Drunken Serpents." It is the first Persona to learn the Repel Fire skill. When itemized through Electric Chair execution in the Velvet Room, Yamata-no-Orochi yields an Oni-Kagura skill card.

Yamata-no-Orochi appears as a Shadow manifestation attached to Shido’s cognition of Politician Ooe, an ally of Shido who ordered several mental shutdowns to kill his competitors in the political world, with the most recent of deaths being the shut down of the train engineer in May to kill a diplomat in a subway crash. The party notes that it is the first instance they've encountered of a Shadow being fused with a cognition of the Palace ruler.

Orochi is two separate demons as Orochi and Yamata no Orochi in the series. In the English versions of Dark and Light, they are known as Orochi and Octorex.

Rank fusing Orochi seven times can have him rank up to Yamata no Orochi.

Rank fusing Orochi in Dark Version can have him become Octorex.

Octorex can perform the combo Wyrm Breath with Lindwurm or Wing Rox.

Orochi is found in the Samsara Tunnels underneath Anahata. One of the doors to his chamber has been severely dented beyond operability and he remarks that his prey recently escaped before he could devour them. Not wanting to lose another meal, he immediately sets upon the party as they try reach the middle of the bridge in front of him.

Orochi is set apart from other bosses in that he gets 8 press turns per round and has a noticeable limit on his MP pool. He will respond immediately to -kaja and -nda spells with Dekaja and Dekunda, which will seriously cut into his MP. Once he runs out, he will stick to using Mad Rush every press turn unless he has enough MP to use MP Thief, which he will use to start another magic skill barrage if allowed. The Null Poison auto skill will protect the party from his Foul Breath attacks and Null Mute skill will prevent him from starting up another magic barrage.

After Orochi is defeated, the party can continue deeper into the tunnels and reach a separate area of Ajna. In the upper floor hallway, a woman who was presumably the victim Orochi mentioned can be found but she has passed away. The party will obtain the Red Ring key item upon examining her.

"A giant snake with eight heads and eight tails that appears in the Kojiki.
It demanded a sacrificial maiden each year, but Susano-o got it drunk and killed it with his sword."
—Devil Survivor 2 compendium

"An eight-headed and eight-tailed serpent from Japanese lore. It's said that trees and moss grow on its body and its belly ever wet with human blood. Every year it demanded a maiden for sacrifice but was tricked and slain by the mighty Susano-o. The sword of Kusanagi was obtained by Susano-o from the tail of Orochi."
—Shin Megami Tensei: Liberation Dx2compendium

Yamata no Orochi as it appears in Shin Megami Tensei IMAGINE

Yamata no Orochi as it appears in Devil Summoner: Raidou Kuzunoha vs. The Soulless Army

Yamata no Orochi as it appears in Persona 5 Royal 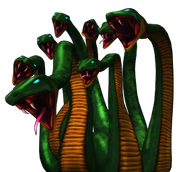 Yamata no Orochi as it appears in Persona Q: Shadow of the Labyrinth

Yamata no Orochi as it appears in Persona O.A.

Yamata no Orochi as it appears being summoned by Yu Narukami in Persona 4: The Animation

Yamata no Orochi as it appears in Persona 5: The Animation

Yamata no Orochi as it appears in Devil Survivor

Orochi as it appears in Devil Survivor 2

Yamata no Orochi as it appears in Card Summoner

Orochi as it appears in Last Bible Special