"He's taken care of Nanjo since the heir was an infant."
—PSP introduction

Yamaoka, known as Alfred in Revelations: Persona, is the butler for Kei Nanjo. After accidentally embarrassing Kei by offering him and his friends a lift in the family limo, he follows them to the hospital, worried about Kei. He is killed by zombies shortly after Maki is abducted and demons flood the hospital.

Kei is horrified by his death, as Yamaoka was the only person who honestly cared about him, and as he lay dying Kei promised Yamaoka to become the number one man in Japan. The rage and despair he felt as Yamaoka passed away were the triggers needed to awake Kei's Persona, Aizen Myouou.

Late in the game, he returns as the ultimate Persona for Kei, summoned using the Amber Glasses Totem.

"The Nanjo family butler who appears in Ibunroku. He died while defending a person who was being attacked by demons in Mikage-cho's hospital, and later joined the fight by becoming a Persona for Nanjo's exclusive use. It's believed that his strong desire to continue protecting Nanjo even after death is what gave him the power that transformed him into a Persona."
—Persona World

Yamaoka (known in the PS1 translation as Alfred) returns once again as the ultimate Persona for Kei Nanjo, summoned using the Amber Eyeglasses Material Card, which is found in the EX Dungeon. 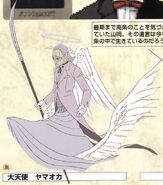 Concept art for the Yamaoka Persona from Megami Ibunroku Persona

Yamaoka as a Persona in the manga 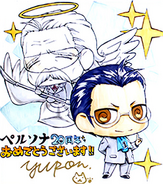 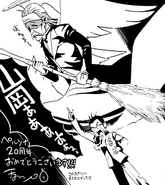