The Xbox Series X and Xbox Series S (collectively, the Xbox Series X/S) are the fourth generation of home video game consoles developed by Microsoft and the successors to Xbox One. They were both released on November 10, 2020.

This section only includes games directly ported to the Xbox Series X/S. For a list of supported games from the Megami Tensei franchise from Xbox 360, see Xbox 360 → Titles. 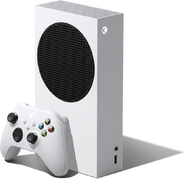