Vritra is a demon in the series.

Vritra the Enveloper is both an Asura and a dragon. He is the embodiment of drought and the chief-enemy of Indra. Vritra was one of the asuras, perhaps the most powerful of them all. His name means "Enveloper." He was a dragon or serpent who was said to be so huge that his coils surrounded mountains, and his head touched the sky. Once upon a time he stole and kept all the world's water to himself, but he was eventually defeated by Indra. Later versions of the myth have him as a loving worshiper of Vishnu who eventually turned evil and forsook his duty as a being of good to become a terrible fiend and the leader of the demonic Asuras and battles the Daevas, while in others he is a creation of Tvastar made to avenge his son who was murdered by Indra.

A priest residing in the Taishidou temple asks the protagonist if he's willing to undertake an ordeal. If the protagonist responds with "yes," he will be teleported to a single-floor dungeon that's full of dark zones. At the end of the dungeon is Vritra, who guards the Venus Pillar. Having defeated Vritra, the protagonist grabs the Pillar and leaves the dungeon.

"Origin: India. Known as an evil dragon which causes droughts. It also makes people suffer by starvation and causes all sorts of destruction. It once defeated its archenemy Indra and obtained immortality. But it still had a weak spot in its mouth, which Indra exploited to shoot a Vajra into."
—Shin Megami Tensei A-Mode DDS dictionary

Vritra appears as a rare encounter in the Tokyo Government Offices. He cannot normally be recruited due to him having a Light-Chaos alignment and must be fused in the Cathedral of Shadows instead. The only other means of obtaining Vritra is by beating a Demon Summoner in Tokyo Destinyland, who will be content to hand over her remaining demon, Vritra, to the protagonist upon defeat.

Vritra was implemented during the Shinjuku Under Wonder Ground event as a boss and lootable summon PG.

Vritra is requested by Loki in an EX Mission found in the sixth sphere of the Womb of Grief, in exchange for 50,000 macca. Loki intends to play a "prank" on Thor with Vritra's assistance.

"A giant, vicious dragon of Indian myth. Its name means "obstacle," for it blocks rainfall from the heavens. Indra returned the rain by defeating it, but the dragon always resurrects and the battle begins anew."
—Gouma-Den Devil Chart

The fourth demon faced in the Ritual of Unsealing. He is joined by two Enkus that respawn. Vritra uses Marin Karin in battle and his unique boss attack is Inferno.

"A fierce demon that worships power and lives to enjoy the heat of battle."
—Demonary, DemiKids

Known as Vrtra, he can perform the Light combo Holy Attack with Sizzard.

Vritra is the gigantic Atma Avatar of Heat after he kills Serph and the two sink into the communication core of the underground science laboratory, EGG Installation. The exact circumstance of his transformation into Vritra is not shown. While Heat assumes this form, he himself is attached above the communication core and roars constantly which echoes throughout the whole EGG facility, whose dimension is twisted due to the data corruption when Sera is shocked at Serph's death.

When Sera has come back to her senses and gained her own Atma Avatar, she accompanies Gale and Cielo back into the EGG to attempt to fix things up. The roar from Vritra actually hints the correct path to the core. When the trio reaches the core, Heat as Vritra smugly scolds Sera for not having an eye on him but Serph and threatens to devour her and the battle begins.

Vritra has a weakness to electricity, a reference to his originating myth that he was slain by the god of thunder, Indra. However, before the party can hit his main body, two of his tentacles will protect it from any damage completely before they are chopped off. The "hands" of both tentacles are actually Heat's original Atma Avatar, Agni's heads. Both tentacles will do physical attack against single or all targets. When either tentacle is still alive, Vritra will use his unique ice attack, Gelid Torrent, which has a relatively high chance of freezing the targets. Both tentacles have the priority to focus the frozen target in order to gain a press turn advantage. This can be negated by casting any type of ice barrier each turn. Vritra has 2 turn icons and each tentacle has 1.

When both tentacles are chopped off, Vritra will begin to use the Inferno Roar and Sonic Wave combo occasionally. Inferno Roar is an Almighty attack thus cannot be avoided except for boosting the party's defense with Rakukaja or Angelic Grace. Sonic Wave causes panic which is Cielo's weakness, it can be prevented by casting Null Panic spell beforehand. An amputated Vritra will also use fire spells, a problem for Sera. Vritra will regenerate both tentacles after they are removed for some time. The duration that Vritra endures the amputated status is determined by the interval between the defeats of both tentacles. If both tentacles are chopped out within same turn, the regeneration will happen much later. So it is preferable to do even damage to both tentacles and do not opt for an attack that hits random targets.

After Vritra's defeat, Heat still attempts to attack. But before he can do so, the revived Serph in the core slits through it and escapes. Heat is forced to revert to his human form with his abdomen wounded and bleeding severely, and he dies shortly afterward.

"A large, violent serpent of Hindu lore. Its name means "enveloper" and it blocked the Rivers, causing droughts.
Indra defeats Vritra and brings rain, but Vritra resurrects itself the following year. The struggle between the two is an endless cycle."
—Devil Survivor 2 compendium

Vritra as it appears in Shin Megami Tensei IMAGINE

Vritra as it appears in Last Bible II

Vritra as it appears in Last Bible Special

Vritra as it appears in Card Summoner

Vritra as seen in Devil Survivor 2 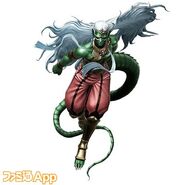 Vritra as it appears in Shin Megami Tensei: Liberation Dx2
Community content is available under CC-BY-SA unless otherwise noted.
Advertisement