Volvo (ボルボ, Borubo)? is a demon in the series.

Volvo is a misspelling of Bombo, a figure mentioned by the early Christian writer, Saint Hippolytus. In Refutation of All Heresies, he mentions an "Infernal and earthly and heavenly" Bombo, going on to describe her thus:

"Goddess of waysides, of cross-roads, lightbearer, nightwalker,
Hater of the light, lover and companion of the night,
Who rejoices in the baying of hounds and in purple blood;
Who dost stalk among corpses and the tombs of the dead
Thirsty for blood, who bringest fear to mortals
Gorgo and Mormo and Mene and many-formed one.
Come thou propitious to our libations!"

Bombo appears to be a demonization of Hecate, who was also described as traveling at night, accompanied by dogs, the restless dead and the light of torches. While in early Greek sources Hecate, despite her association with magic and the dead, had a benevolent character, serving as an ally of the Olympians in Titanomachia and Gigantomachia and as an attendant of Demeter who escorts Persephone during her yearly journeys, later texts, such as Apolonius' Argonautica reduce her to the role of a malevolent witchcraft goddess. As such, she was an ally of the witches Circe, Medea and Erichtho, and the rites dedicated to her were described as an affront to the moon goddess Selene. Roman era authors, especially Ovid and Diodorus Siculus, further demonized Hecate. The latter reduced her to the witchcraft-related roles, and regarded her as a bloodthirsty mortal queen and mother of Medea, rather than a goddess.

The name Mormo mentioned by Hippolytus alongside Bombo appears to refer to Mormolyce, a Greek boogeyman analogous to empusa[1], while Gorgo is most likely a gorgon like Medusa. Mene is an alternate name of Selene, the Greek goddess of the moon, sometimes associated with Hecate and eventually conflated with her by Romans.[2]

While her Megami Tensei profile describes Volvo as a goddess of fertility, Hecate was generally described as a virgin goddess like Artemis.[3] She was regarded as a divine helper during childbirth but not exactly a goddess of fertility or motherhood herself, despite frequent portrayals as an attendant of Demeter or sometimes Cybele.[4] The notion of Hecate as a single goddess in three forms (often called "virgin," "mother" and "crone" ), each with different functions, is popular in pseudohistory, neopaganism and Wicca but was largely an invention of Robert Graves, a 20th century poet with very loose approach to historical sources, who probably misinterpreted the depictions of Hecate with three bodies, known as "Trimorphis" or "Epipurgidia" (related to her role as a goddess watching over crossroads) or texts mentioning her as part of triads with either Demeter and Persephone, Artemis and Selene, or other goddesses.

The prayer to Bombo recorded by Hippolytus was used by H. P. Lovecraft in his story The Horror at Red Hook.

Her history description also well-aligns with the compendium entries commonly associated with her in the series appearances she has made. [5]

Volvo appears in the Womb of Grief on floors that have previously been cleared as part of the EX Mission Wardens of Womb of Grief. She appears once the previous Warden, Isis, has been defeated and upon defeat will be replaced with the next Warden, Cybele.

Upon defeat, Volvo can be summoned through a special fusion requiring Titania, Diana and Strigoii once the protagonist reaches level 71.

"The top goddess of magic and sorcery, thought to be originally an earth goddess of Greek descent, worshiped by witches. She has a violent, bloodthirsty side, but is also filled with broad-minded love. She is believed to have three aspects as the goddess of fertility, goddess of the new moon, and goddess of necromancy. At night, she is said to wander the land with packs of watchdogs and ghosts she controls with the power of the Netherworld. "
—Devil Summoner: Soul Hackers compendium 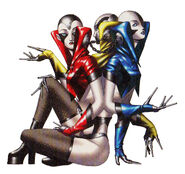 Volvo as she appears in Devil Summoner: Soul Hackers

Volvo as she appears in Last Bible Special