Virion is a character from Tokyo Mirage Sessions ♯FE.

Virion is a character that appears in Fire Emblem Awakening. An archer, he joins the Avatar's forces in the first chapter when Chrom and his friends are assaulted by undead beings called Risen. He remains among Chrom's Ylissian forces for the duration of a subsequent war with the nation of Plegia, but disappears following the defeat of the Plegian King Gangrel.

Two years later, Virion returns to Chrom's side seeking the help of Ylisse. It is at this point that Virion reveals that he is actually the Duke of Rosanne, a nation on the neighboring continent of Valm, and that Rosanne has become the latest conquest of a brutal warlord named Walhart that intends to bring all of Valm under his control. Virion rejoins Chrom's forces as they stop Walhart's ambitions, and remains with him through the subsequent campaign to defeat the Fell Dragon Grima.

An "Archer" Mirage and Eleonora Yumizuru's partner who transforms into a bow to aid her in battle. However, his aristocratic attitude leads to him butting heads with Eleonora often.

Concept artwork of Virion as a Sniper

Concept artwork of Virion as an Assassin

Artwork of Virion and Eleonora in Fire Emblem 0 (Cipher).

Artwork of Virion and Eleonora in Fire Emblem 0 (Cipher) by Fumi Hasumi. 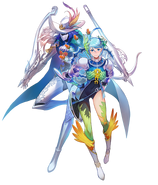 Artwork of Virion and Eleonora from Fire Emblem Heroes by Kakage. 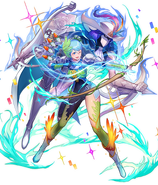 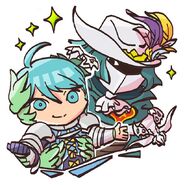 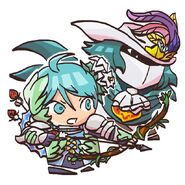