Edit
Note: This article contains external links to other wikis.

Vincent Brooks is the protagonist of Catherine.

Vincent is a young slender-built man with short messy asymmetrical black hair and gray eyes, he has a fair complexion, and stubble on his chin. Attire-wise wears a simple pink-colored T-shirt, with the word "RAVE" on the front, over which he wears a beige-colored jacket With "Italian Stallion Equipment Since 2009" on the left shoulder. The jacket has vertical white and green stripes on the front left side, which seems to represent the flag of Italy. He wears dark red pants, held up by a brown belt and black dress shoes. In all of his nightmares, he is naked except for a pair of white boxers with pink polka dots on them, and is always carrying a white plain pillow, and he has grown horns that resemble a ram’s on his head.

Vincent Brooks is a rather calm and smooth talker in Persona 3 Portable, not breaking his cool expression and demeanor, despite being under stress.

In Catherine, he is more expressive. Vincent is a textbook bachelor: his room is a terrible mess, he has difficulty with commitment, and he spends almost all his free time having fun with friends. Despite being extremely devoted, he is weak willed, and he's shown to be a very prolific liar under pressure as the love triangle forces him to spin an increasingly shoddy web of lies to keep the women from discovering each other. The degree that he lies to depends on the player. Despite this, Vincent knows how to please women and be a good boyfriend and has always been popular with girls, even in grade school according to Orlando.

Vincent's a fairly perceptive friend, but doesn't seem to know his limits or boundaries in conversations. He can be highly confrontational toward others, even getting physical at his breaking point. He's also very blunt toward Erica about her issues, and tends to snap at people when they patronize him. He's an active drunk, often spending an entire night drinking at the Stray Sheep before going home and drinking more beer. This causes him to have constant hangovers and memory blackouts, which usually involve him (apparently) calling Catherine over for "company," which he claims not to remember at all.

A man that appears to be Vincent appears in Persona 3 Portable as an unnamed man drinking alone at the Club Escapade. The man drinking alone gives hints about the game Catherine, asking the player to remember him and that if they ever meet again, he will tell more about his story, also saying that it probably won't have anything to do with the protagonist's problems as a reference to Catherine not having any relation to the story of Persona 3.

See also: the Vincent Brooks article on the Catherine Wiki

Vincent is the protagonist of the game, Catherine. Troubled by nightmares, he becomes entangled with the mysterious titular blond, Catherine, whose presence threatens the stability of his future with his long-term girlfriend, Katherine. The outcome of his story depends largely on the player's actions within the game. 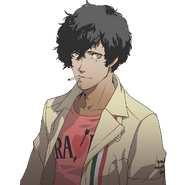 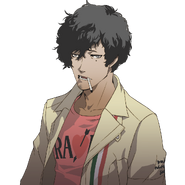 The protagonist dressed as Vincent in Persona 5