Verdandi is a demon in the series.

In Norse mythology, Verdandi (Old Norse: Verðandi), sometimes anglicized as Verthandi, is one of the trio of Norns who decide the fate of men (along with Urd and Skuld). Her name literally translates to "to be" or "what is coming into being" and is generally depicted as beautiful woman.

Verðandi is literally the present participle of the Old Norse verb "verða", "to become", and is commonly translated as "in the making" or "that which is happening/becoming"; it is related to the Dutch word worden and the German word werden, both meaning "to become."

Verdandi is the Ultimate Persona of Maki Sonomura.

Verdandi is one of the time maidens who live in the Orgel room inside Lucifer's dark palace. Darklord and Lord Light left all their tasks to the three maidens. Verdandi was left with the time chains given by the two Lords and gives them to Akira. She mentions that there aren't enough to destroy all time rifts and that he must travel to Ice Town using the chains to get to the temple that leads to Valhalla. She states that Shin was deceived by Imperius into defeating Lucifer. Together the three use their powers to send Jin back in time. After beating the game Verdandi can be recruited.

Verdandi can be obtained by beating Hoshigami in BattleNet.

Verdandi appears in Akira's route, where she has been separated from her sisters. She has been forced to work for Imperius after they took over the Light Temple. After noticing Akira and his allies have arrived, she releases the seal on the teleporters and tells him that the Goddess statue will heal his allies. She serves as the boss of Earth Makai, with a Virtue guarding her. Verdandi dies after the battle, with the yellow crystal being left behind after her defeat.

After beating the game once Verdandi and the other bosses can be recruited in Tyranog. 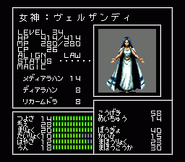 Verdandi in the Sega CD remake of Shin Megami Tensei.

Verdandi as she appears in the story of Devil Children Messiah Riser.