Reverse
Gold
"I am Venus... Goddess of fertility about whom beauty and love dance... I am you... You are me... Let us become one..."
—Venus, Persona 2: Innocent Sin

Venus, also known as Aphrodite, is a demon in the series.

Venus is the goddess who presides over love, beauty, desire, virtue, sex, fertility, prosperity and victory in Roman Mythology. Venus is one of the principal Roman deities who often appears in countless tales and legends, considered as the ancestor of the Roman Empire. She is married to the god Vulcan, the lord of blacksmiths. Her counterpart is the Greek goddess Aphrodite.

Unlike her Greek counterpart, she was regarded in a higher standard, as she was the mother of Aeneas, a hero from the city of Troy and ancestor of Romulus and Remus, who led the city's survivors to the area in Italy that would eventually become the Roman Empire. Venus has been described as perhaps the most original creation of the Roman pantheon, and an ill-defined and assimilative native goddess, combined with the strange and exotic Aphrodite.

She is flirtatious, crafty, smart, and free as the wind and disloyal to her husband Vulcan, as evident by her having numerous affairs with both gods and humans alike, notably the god of war, Mars. She possesses deep grudge and hatred toward those who have "perverted" notion of love or thinking love is beneath them. As she is a goddess of victory, she could be very competitive and could make a challenge out of nearly everything.

Despite this, she could be very sweet, loving, and passionate, and she has a faith in love that is absolute and true. She could be very gentle and gracious to those she favors, and she deeply cares for her children, as shown through the various time she helped her son Aeneas got out of harm's way.

Symbols of Venus included the scallop shell, doves, dolphins, pomegranates, pearls, mirrors, and girdles. Many of these were also adopted from Aphrodite. So was her origin story. After Saturnus severed Caelus' genitals, which fell into the sea, a foam arose from them and Venus was born.

Venus can be gained through the story as the ultimate Persona of Lisa Silverman only if the Pink Argus Mask is successfully collected. Her body appears to be all-covered or composed of foam with ornaments of shells, representing the true origin of the goddess. Any attack connected with the Earth, Holy, and Dark elements can now be nullified, but the Persona also has a weakness against Wind abilities. Venus will also learn some advanced Water and Earth related spells, recovery abilities and her special attack, Foamy Lover can be chained to form the Fusion Spell, Grand Cross. She is of the Lovers Arcana.

Venus is initially weak against Dark. If the player has Lisa equipped with Venus during the boss battle in Taurus Temple, after the fight Venus will merge with its Reverse and lose its weakness to Ice, gain resistance to Electricity, and its weakness to Darkness will change to immunity. 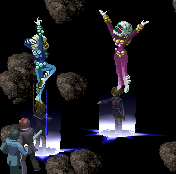