Valkyrie is a demon in the series.

A Valkyrie (from Old Norse valkyrja "chooser of the slain") is one of a host of female figures that appear to the dead in Norse Mythology and decides who will die in battle. The valkyries bring their chosen to the afterlife hall of the slain, Valhalla, ruled over by the god Odin, where the deceased warriors become einherjar. There, when the einherjar are not preparing for the events of Ragnarök, the valkyries bear them mead. Valkyries also appear as lovers of heroes and other mortals, where they are sometimes described as the daughters of royalty, sometimes accompanied by ravens, and sometimes connected to swans.

Valkyrie is a level 31 Guardian-only demon.

"'Choosers of the slain' in Norse mythology. Armed with shining armor and spears, they look for the brave to take to Valhalla, so that they may fight in Ragnarok."
—Shin Megami Tensei III: Nocturne profile

Valkyrie can be obtained by evolving Dis.

Valkyrie can only be obtained through fusion or as a reward for clearing the Ichigaya hack instance. She appears in support of Thor when he acts as a boss in Shibuya's Celu Tower gold instance, in support of Odin when he appears in Shinagawa's Diaspora instance, and as a spawn within the unmapped areas Ikebukuro's Zoushigiya Cemetery. She can be obtained as a mountable demon.

"Odin's daughters in Norse lore. They ride their horses through the sky and fight. Their duty is to guide the souls of warriors to Valhalla in preparation for Ragnarok. "Valkyrie" means "chooser of the slain.""
—Shin Megami Tensei: Strange Journey compendium

Valkyrie can be found in Reverse Hills. Kelpie may evolve into Valkyrie at level 42. Valyrie can teach Flynn the Tetrakarn, Javelin Rain and Mortal Jihad skills through her Demon Whisper.

Valkyrie can be found inside of the Tennozu Shelter or evolved from a Kelpie once it reaches level 39. She can teach Nanashi the Javelin Rain, Blast Arrow and Mortal Jihad skills through her Demon Whisper. Valkyrie benefits from learning Physical and Gun skills.

""Choosers of the slain" in Norse lore. Armed with shining armor and swords, they look for brave warriors to take to Valhalla, so that they may fight in Ragnarok."
—Persona 5 background

Valkyrie is the seventh Persona of the Strength Arcana and can be found as a Shadow in Niijima's Palace and in the Sheriruth area of Mementos, with the title "Funerary Warrior." She is the first Persona to learn the Deathbound skill and is one of the two sources of the Dodge Phys skill. When itemized through Electric Chair execution in the Velvet Room, Valkyrie yields a Giant Slice skill card.

Valkyrie is the first Persona of the Strength Arcana and can be found as a common and miniboss Shadow in the Osaka Jail. A particularly powerful Valkyrie can also be found in said Jail.

Masaki Kuzuha encounters Valkyrie in Ice Expanse, where she is looking for her lost armor which was stolen by an angel's servant. After finding it in one of the hidden caves and defeating the demon guarding it, Masaki can return it to her. Valkyrie joins the party in gratitude.

"A maiden who guides the spirits of warriors who've fallen on the battlefield."
—Demonary, DemiKids

Valkyrie has the power ThunderProof.

"Odin's daughters in Norse lore. From their flying steeds they fight with vigor. They dutifully guide the souls of fallen warriors to valhalla in preparation for Ragnarok."
—Shin Megami Tensei: Liberation Dx2 compendium

Valkyrie's concept art as it appears in Shin Megami Tensei: if... 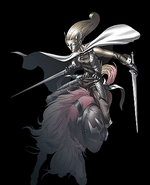 Valkyrie as she appears in Card Summoner 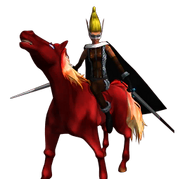 Valkyrie as she appears in Persona Q: Shadow of the Labyrinth

Valkyrie as she appears in the Shin Megami Tensei: if... manga
Community content is available under CC-BY-SA unless otherwise noted.
Advertisement