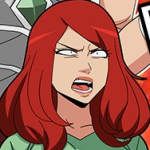 Mishaguji appears as a boss fight at the top of Waden One. When Raidou Kuzunoha the XIV refuses to join Major General Munakata's Super Soldier Project at the end of Episode Eight, he summons Mishaguji to kill Raidou. His Cursed Emissions are a slow projectile that track the player and, even if blocked, will still inflict the Paralysis status effect. His Cursed Bolt is a wave of purple lightning bolts that inflict the

"I have been summoned by those calling me from the sea of Suwa... to cast a curse upon any malefactors who stand in our way... No human can withstand my emissions. They're far too strong a stimulant... You won't know which way is up!"
—Mishaguji, beginning of the first battle with him
"You're stronger than I anticipated. I'm impressed, Summoner! But, you won't overcome my secret art, Cursed Bolt... Its crashing will penetrate your soul, sapping your will to fight!"
—Mishaguji, middle of the first battle
"The curse... brings disaster to the Capital... Even should my flesh turn to dust... I prevail!"
—Mishaguji, end of the first battle
Retrieved from "https://megamitensei.fandom.com/wiki/User:BlackFruity?oldid=328396"
Community content is available under CC-BY-SA unless otherwise noted.