Liam O'Brien
"I... am... Uriel... My duty is to build the Millennial Kingdom by God's authority... I will cast you down to hell!"
—Uriel, Digital Devil Saga: Avatar Tuner 2

Uriel is a demon in the series.

In Abrahamic religion, Uriel was a high ranking archangel or seraph who was listed as the fourth angel that represented the four cardinal points, the others being Michael, Gabriel and Raphael.

People sometimes ask for Uriel’s help to: seek God’s will before making decisions, come up with fresh creative ideas, learn new information, solve problems, resolve conflicts, let go of destructive emotions such as anxiety and anger that can prevent them from discerning wisdom, and recognize dangerous situations so they can try to avoid them.

Although he is never mentioned by name in any of the widely accepted holy scriptures, he came to be known as Uriel, which means "Flame of God," for his depiction of holding a flaming sword. He is said to carry the stars in the sky, and on the final day of judgement, he will oversee the resurrection and retribution of human souls. According to the Apocrypha, Uriel was the guardian to the gates of the Garden of Eden.

Uriel is one of the four archangels in the service of YHVH. Usually seen with Raphael, Gabriel and Michael.

"Origin: Israel. One of the 4 heralds, the seraph of earth. Uriel was considered at one time a fallen angel by the Eastern Orthodox Church. He's said to be the governor of Tartarus who will sentence all souls on Judgement Day."
—Shin Megami Tensei A-Mode DDS Dictionary

Along with Gabriel, Raphael and Michael, Uriel is one of the four major sub-bosses of the last arc of the game, the Seraphims, and one of the most powerful angels under God's orders that stands guarding the superior part of the Basilica.

He appears defending the second floor, saying that the heroes' souls are "wrapped in evil and darkness" before engaging them in battle if they're not law aligned. This fight, however, is entirely optional, as the protagonist can choose to just take the stairs towards the next floor without having to enter Uriel's room.

In the Law route, he instead joins the protagonist's party, as he is required in order for a triple Fusion with Gabriel and Raphael can be performed, resulting in the creation of the "Angel Ring;" a valuable item needed for the final showdown against Asura to become available.

Uriel is disguised as one of the senators. He is fought alongside Raphael.

"One of the four major archangels. His name means "flame of god". He knows all of the celestial phenomena. He is also the first angel Satan met on earth."
—Shin Megami Tensei III: Nocturne compendium

"A Seraph, one of the Four Seraphim. Uriel appears widely in the Old and New Testaments, Apocrypha, and the pseudepigraphic Book or Enoch. His name may mean "Flame of God" or "Power of God." He wields a flaming sword and a shield that is never blemished. He is charged with controlling the heavens and protecting the Garden of Eden.
Uriel is also known as the angel of penitence. As the overseer of Hell, he burns those who defy God with fire and brimstone. On Judgment Day, he will summon all life on Earth to Hell and pass judgement on their sins.
Christianity and Judaism hold that there are 7 Seraphs, including Uriel. In Islam however, there are only 2 Seraphs, and Uriel is not one of them.
Uriel also appears as a bringer of prophecy, warning Noah of the coming Flood. He is the only angel who has ever taken human form."

In the Law path of Envoy for Messiah/Gaia Church, players are asked to defeat Uriel in a trial in Judah's spirit world. If a player answers Uriel's questions to his satisfaction after the fight, players are able to acquire a variant of him as well as the ability to fuse him. He is a special triple fusion of Dominion, Virtue, and Power.

Uriel is the true identity of one of the masked men at Kagome Tower and one of the four archangels. He is the first archangel fought in the DLC Challenge Quest "Clipped Wings 1." During the battle, Uriel will ask Flynn why he is conspiring with the fallen one. Remaining silent or saying that you intend to protect Tokyo will lead to Uriel boosting his stats while saying that you wish to fight him will lead to Flynn obtaining half a Press Turn. Upon being defeated, Uriel will exclaim that their "Millennium Kingdom" is drifting away and that because of the Unclean Ones it is becoming soiled. Uriel is the only demon that has the Skill Kannuki-Throw, which in combination with other skills such as Charge and Dark Energy, is potentially the most powerful Physical attack in the game.

A statue of Uriel can be seen within the Diet Building in Nagatacho, radiating a blue aura. By the time of the events of the game started, Uriel is already dead, having been slain by the forces of Chaos. Melchizedek mentions that Uriel once served Baal as an indigenous god when the Bull God was the ruling Nahobino, before the Creator God usurped the throne and rewritten Uriel's legend.

Uriel appears as a boss fought during the Quest "The Holy Ring", issued by Melchizedek in Taito, the quest being available after obtaining the Three Keys needed to enter the Empyrean. Melchizedek seeks to unseal Michael from his imprisonment following Armageddon 18 years prior to the game, having deemed Abdiel unfit to lead Bethel, and to do so requires infusing the power of the slain Archangels Uriel, Raphael, and Gabriel into the Angel Ring Key Item Melchizedek provides the protagonist with upon accepting the quest. The Angel Ring will revive the three fallen Archangels by collecting their dispersed Magatsuhi, but in the process make them remember their time serving Baal, forcing Melchizedek to rely on the protagonist on fighting and defeating Uriel and the others, the fight starting by the protagonist inserting the Angel Ring into the mihishiro in Asakusa, within former Hindu demon territory. Once the three are defeated, their Magatsuhi and power are put into the Angel Ring, completing the Quest, rewarding the player the Herald Talisman and the ability to fuse Uriel in the World of Shadows.

Uriel is the true identity of Étienne, the young Frenchman who joins the protagonist and heroine on their journey.

Uriel is fought in Amnesia on the Neutral, Light-Law, and Dark-Chaos Routes, where he guards the base in Syekahim.

"One of the four major archangels. His name means "Flame of God", and he knows all celestial phenomena. He is the first angel Satan met on earth."
—Persona 3 compendium

"One of the four major archangels. His name means "Flame of God," and he knows all the celestial phenomena. He is the first angel Satan met on earth."
—Persona 5 background

Uriel is the eighth Persona of the Justice Arcana and can only be obtained through fusion in the Velvet Room. He is one of four Personas to learn the Bloodbath Physical skill and one of the two sources for the Repel Nuke skill. He is one of three Personas with access to the Angelic Grace skill and one of the five with access to Spell Master. When itemized using Electric Chair execution, Uriel yields the Heaven's Gate rifle for Yusuke Kitagawa, which has 378 ATK, 88 ACC, fires 12 times per round and increases Yusuke's Agility by 10. Uriel is one of the Personas needed to summon Michael through advanced fusion.

Uriel appears as the first guardian of the Path to the Holy Grail in the Qliphoth World, known as the "Herald of Death."

Uriel can be itemized during a fusion alarm to create Providence, a stronger version of Heaven's Gate. Providence has a higher attack than Heaven's Gate and boosts the Agility stat increase to +13.

Uriel is a boss in Black Book, where he acts to destroy Casino Town in Fire Land for their sinful ways. After Michael and Nagahisa Kai are defeated in the Light Palace he will join the party in order to learn what true justice is.

An angel sent by Tenkai's army to assassinate Masaki Kuzuha. Although he fails in his first attempt in Harajuku, Uriel warns they will meet again. Later he confronts Masaki in Heaven's Corridor, warning him that only angels and those with their powers can enter Tenkai, calling him a fool for refusing to listen as he falls into the Deep Hole. He confronts Masaki again on his second attempt and is shocked that Masaki is somehow able to enter Heaven's Corridor, attacking him with his servant angels. Uriel is shocked upon being defeated, dying after the battle.

"An unforgiving angel that punishes evil demons with the blazing flames of justice."
—DemiKids Demonary

Uriel has the special power FireProof, which prevents death by fire attacks. Uriel can perform the light combo War Breath with Raphael, which increases the stats of the party for 15 MP. Uriel can be fought in the Old Tower.

Uriel, along with the other three archangels, is an optional boss to be encountered before the party goes to the Sun. Much like the other archangels, Uriel is a human turned demon who struggles with recollecting his memory and his hunger, along with suffering from an identity crisis where he believes he is a Millennial Kingdom angel. Uriel resides in the EGG Installation in the same exact room where Serph and company fight Abaddon.

In terms of combat prowess, Uriel sports Ziodyne, Hamaon and Skull Cleave. When his HP has approximately been halved, dialogue initiates and he will start to focus on using Judgement which is a unique fire-based ability. It is important to keep track of his HP, as the party may need to throw up a Fire Shield spell in advance and he will start with the Fire spells right after his dialogue.

Uriel as he appears in Shin Megami Tensei

Uriel as he appears in Shin Megami Tensei IV 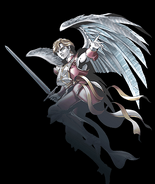 Uriel as he appears in Persona 3

Uriel as he appears in Devil Children Red/Black Book

Uriel as he appears in Shin Megami Tensei III: Nocturne

Uriel as he appears in Persona 5 Royal 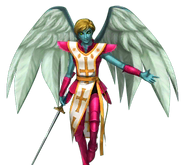 Uriel as he appears in Persona Q: Shadow of the Labyrinth.

Uriel as he appears in Persona O.A.

Uriel's sprite as it appears in Last Bible III