Urd is a demon in the series.

Urd (Old Norse: Urðr) is one of three Norns of Norse Mythology, who decide man's fate (alongside Skuld and Verdandi). Her name means "that which has become" or "what once was" and was also called the Dís of Death.

Urðr is together with the other Norns located at the well Urðarbrunnr beneath the world tree Yggdrasil. They spin threads of life, cut marks in the pole figures and measure people's destinies, which shows the fate of all human beings and gods. She and the other Norns are always present when a child is born and decide its fate.

Urðr is commonly written as Urd or Urth. In some English translations, her name is glossed with the Old English form of urðr; Wyrd.

Urd is one of the time maidens who live in the Orgel room inside Lucifer's dark palace. Darklord and Lord Light left all their tasks to the three maidens. Urd proclaims in Light Version to Jin that with Lord Lucifer's defeat that Dem's doom will gradually come to pass. She tells Jin that by using Lucifer's gem he can travel to the past to before Lucifer was defeated in order to change the past. On this path he must travel to a place where he can travel through time and will meet the one who defeated Lucifer, Shin. Together the three use their powers to send Jin back in time. Urd can be recruited after beating the game.

Urd can be obtained by beating Hoshigami in BattleNet.

Urd appears in Akira's route, where she has been separated from her sisters. She is found in the fourth stage, the Light Temple's entrance, surrounded by Imperius's troops. She slowly moves across the field while being followed by two Franken's, and the other demons in the stage must be defeated to ensure her survival. Once the stage is beaten she is reunited with her sister and joins the party.

Urd as she appears in the story of Devil Children Messiah Riser. 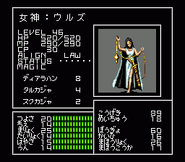