Cindy Robinson
Unit #024 is a character from Persona 4 Arena. She is an older Anti-Shadow Suppression Weapon who has a lesser sized Plume of Dusk. She speaks in an impressively natural tone and seems to have developed a fully-fledged personality and has a fondness for a dog named Snowy.

Appearing only in Labrys' story, she befriends Labrys immediately upon her first walk out in the open area of the research facility where the Ergo Research takes place. Through time, her warm personality bursting with human-like vigor rubs off on Labrys and slowly the two begin to understand convictions, shed light on the ego, and ultimately develop their own respective individuality. At the apex of their interaction, they share the hope of love and meeting a special someone, to Unit #024, a female. After #031 is dubbed the 5th Generation Anti-Shadow Suppression Weapon Labrys, #024 gives her an archive with orders not to open it until everything was over claiming that it would be unfair to open it on the spot.

Although when #031 is ordered to destroy the rest of her sisters in her class, she of course comes face to face with #024. Unable to resolve things as the room, only opening to a single victor, would not yield, the two clash each with their own convictions in the balance. Although she wielded her impressive 1.5 meter broadsword, she was no match for Labrys whose physical capabilities greatly excelled that of #024. Quickly disarmed, researchers brought the empty husk of #024 back to fighting proper and Labrys was faced with having to completely and utterly destroy #024. Labrys blacks out from the trauma.

Later when she wakes up, Labrys begins to inherit #024 memories and open the archive that was previously inherited but unopened. Through this interlude, she learns of her origin through a recording: a child mother whose personality was used for the basis of Anti-Shadow Suppression Weapons. Within the archive, she hears of #024's voice urging Labrys not to feel guilt for anticipated death and states that despite her life being filled with sorrow, she believes it had meaning due to her mother's message and passes her dream onto Labrys: to leave the island to thank their mother for giving birth to them and loving them. 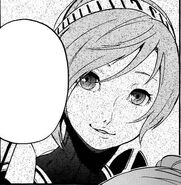 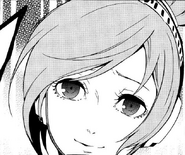 Unit #024's smile before her demise in Persona 4 Arena Manga