Undine is a demon in the series.

An Undine is a female water creature that famous medieval German-Swiss chemist Paracelsus had coined for water sprites or elementals. It symbolizes the element of water and is invariably depicted as a beautiful female, which is consistent with the ancient idea that water is a female element. An water elemental is a mythological being first appearing in the alchemical works of Paracelsus. Their name is Latin for "wave."

They are usually found in forest pools and waterfalls, and their beautiful singing voices are sometimes heard over the sound of water. The offspring of a union between an undine and a man are human with a soul, but also with some kind of aquatic characteristic, called a watermark.

In one story, an undine married a human man who vowed to love her with every breath he took, but when he was unfaithful, she cursed him to stop breathing in his sleep and die. He ultimately passed out from sheer exhaustion and suffocated.

Undine is required to retrieve the Flood Tide Orb from a bottomless lake in one of the caves in the Valley of Despair. The cave is located near Asmodai's, and the lake itself is guarded by 8 Hydras. After sending Undine into the lake, the hero will be prompted to leave three times before she returns with the jewel. Once it is obtained, it is used to douse the flames surrounding Belial's Castle in the Fields of Lunacy.

"Origin: Worldwide. A water spirit named by Paracelsus. It symbolizes the element of water and is commonly depicted as a beautiful woman."
—Shin Megami Tensei A-Mode DDS Dictionary

"One of the four elemental spirits of Paracelsus, it is a water spirit in the shape of a beautiful virgin.
Their name is Latin for "wave." There are tales of some falling in love with humans, and it is said if you marry one, you should never yell at her by water, for she will return there. If you are unfaithful to an Undine, she will kill you."
—Shin Megami Tensei: Strange Journey Compendium

A Undine once served as one of Skins' demons in Tokyo, Blasted Tokyo and Infernal Tokyo. She hangs out in the Counter-Demon Force Base in shame at fleeing when he faced the Angels, Pluto and Kenji, residing there since it reminds her of Skins. Undine is happy that he's still alive when she detects his magnetite on Flynn, leaving after giving him an award for letting her know Skins still lived so that she can go and meet him.

As a member of the Element race, Undine can only be obtained by fusing two demons of the same race together, with possible races being the Avatar, Genma, Megami and Vile races. Undine can teach Nanashi the Poison Breath skill through her Demon Whisper. She benefits from learning Ice and support skills.

Undine is a Fusion Spell in both Innocent Sin and Eternal Punishment, summoned by using any Water skill and the Summon Spirits skill in the former and Wonderful Aques and Summon Spirits in the latter.

"This water spirit lives in lakes and fountains, appearing as a beautiful woman. It has no soul unless it marries a human man, which is a serious taboo among Undines."
—Persona 4 Compendium

Undine becomes available once the protagonist reaches Level 33. As with all Personas of the Lovers Arcana, she can only be acquired through fusion.

Undine can perform the combo Splash Ray with Sol Cat.

Undine as she appears in Shin Megami Tensei: Devil Summoner

Undine as she appears in Persona 4 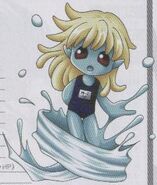