Ubelluris, also known as Upelluri, is a figure from Hittite and Hurrian mythology. According to Song of Ullikummi, a myth dealing with the conflict over kingship in heaven among the Hittite (or Hurrian) gods, he holds the earth on his shoulders. The events of the myth were believed to take place near Mount Hazzi, also known as Mount Saphon, a site associated with many storm gods, including the Hurrian Teshub, the Hittite Tarhunna, Baal and later on Zeus as well.

Ubelluris was described as an entity existing in a dreamlike state, and as a result was not very perceptive. When the servants of Kumarbi, the antagonist of the entire cycle of myths (similar to the Greek Cronus) had placed the stone giant Ullikummi on his shoulders, he was barely aware of this additional burden. On top of that, he tells Ea (Enki) that even when the heavens and the lands he was supporting split, he didn't notice at all. While he doesn't play an active role, the information he provided the gods with seemingly let them defeat Ullikummi.

Ubelluris can be contracted during the daytime in Ikebukuro. Enemy variants can be found in Shibuya's Quartz gold level instance and Ueno's Mirage instances.

The most reserved Tribhvana member, Tribhvana: Earth, initially takes the form of Ubelluris during encounters. They stick to physical attacks, which aren't that dangerous by themselves. However, if Ganga is still active in the battle, the attacks will critical if she manages to affect a party member with Freeze or Shock. They are first encountered on the 20th floor of the Karma Society Tower.

The Tribhvana try to ambush the party again on the 32nd floor, but not much has changed aside from the HP totals and access to a new enemy combo.

"A Hittite mountain god that dwells in the bottom of the Persian Gulf and supports the land and sea.
He is extremely dense, such that when the gods placed the stone giant Ullikummi on his shoulders to create the world, he didn't notice the burden. On top of that, even when the heavens and the lands he was supporting split, he didn't notice at all."
—Devil Survivor 2 compendium

Ubelluris as it appears in Shin Megami Tensei IMAGINE 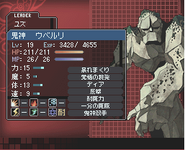 Ubelluris as it appears in Devil Survivor

Ubelluris as it appears in Devil Survivor 2