Tzitzimitl is a demon in the series.

A Tzitzimitl (or Tzitzimimeh in a group) is a female deity associated with stars in Aztec mythology. They were depicted as skeletal female figures wearing skirts often with skull and crossbone designs.

The Tzitzimimeh were associated with the stars and especially the stars that can be seen around the sun during a solar eclipse. This was interpreted as the Tzitzimimeh attacking the sun. The Tzitzimimeh had a double role in Aztec religion: they were protectresses of the feminine and progenitresses of mankind. But they were also powerful and dangerous, especially in periods of cosmic instability.

Tzitzimitl appeared as a boss during the second appearance of the Judgement Battle. Players who defeated her strongest form had the chance to obtain a summon PG to allow them to summon her as a demon. She was later added as a plug-in obtainable through the Secret Room. Her fusion is Coatlicue, Quetzalcoatl and Kali. Tzitzimitl is one of the few non-variant demons with a feature that increases damage according to an opponent's gender.

She also is unique in that she receives much less damage from enemy players while receiving drastically increased damage from enemy demons, with damage reduction stats shared only by demon variants found in the Diaspora instances. This has fueled player speculation that she may have been intended as the boss for the Diaspora Ueno instance that was announced and never followed through with.

"Aztec goddesses of night and fear.
They constantly attack the sun and cause solar eclipses. They demand a sacrifice once every 52 years."
—Shin Megami Tensei: Strange Journey compendium

Tzitzimitl can be found in the Cosmic Egg, in the Fifth section. She can teach Nanashi the Bufudyne, Makajamaon, Dekaja and Will of Frost skills through her Demon Whisper. She benefits from learning Ice and support skills.

When the party chases Haruo Weyland in the Persona Thief quests, he summons a Tzitzimitl to block one of the stairs.

"Goddess of Aztec myth who governs night and fear, she symbolizes death and evil. Her war with the sun god caused a catastrophic solar eclipse. She seeks a sacrifice every 52 years."
—Persona 4 compendium

Tzitzimitl as she appears in Devil Summoner: Soul Hackers

Tzitzimitl as she appears in Shin Megami Tensei IMAGINE

Tzitzimitl as she appears in Devil Survivor 2 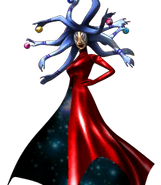 Tzitzimitl as she appears in Persona Q: Shadow of the Labyrinth
Community content is available under CC-BY-SA unless otherwise noted.
Advertisement