Picaro
Tsukuyomi (ツクヨミ*)?, also known as Tsukiyomi (ツキヨミ*)? is a demon in the series.

The lunar god in Shintoism. He was born of Izanagi's right eye as he bathed after his descent to the underworld, thus making him the brother of Amaterasu and Susano-O.

"Soul of the light of heaven and earth, light of the moon, come here to me, Tsukuyomi!"
—Tsukuyomi

Special Forces Agent Narukawa is the reincarnation of Tsukuyomi, and as such, shows a familiarity that he cannot define with Akemi Nakajima, the reincarnation of Izanagi. When Nakajima is tormented by Isma Feed and Set through their torture of Yumiko Shirasagi, Tsukuyomi reawakens within Narukawa. Tsukuyomi quickly dispatches Isma and Typhon with arrows of light and commands that Charles Feed takes Nakajima to safety, identifying Nakajima as a important warrior. Tsukuyomi attempts to hold off Set as they escape, and is killed by the demon.

Tsukuyomi was implemented during the 2015 Halloween event and his plug-in was obtainable through it. He possesses a unique feature that boosts his magic abilities and limit break power according to the moon's phase. He can be fused in a triple fusion of inexperienced Yatagarasu, Hecate, and Nyx.

Tsukuyomi appears as the Persona of Sousei Kurogami. According to Tetsuma Tsuge, Sousei awakened Tsukuyomi not long after Aigis had successfully awakened Palladion, but unlike the latter, Tsukuyomi has no combat ability at all, thus causing Sousei to be classified as a failure. Much like Amatsu Mikaboshi, Tsukuyomi is unable to engage in combat, but makes up for this flaw with a very special ability: Past Reading. This special skill enables Tsukuyomi to hear the thoughts of deceased people up to six months after their deaths. However, if Amatsu Mikaboshi synchronizes with Tsukuyomi, this duration can be extended to three years.

Known as Tsukiyomi, it is the Persona of Sho Minazuki when he surfaces through a Plume of Dusk, and is, befittingly, of the Moon Arcana. During Sho's Instant Kill attack Tsukiyomi's body is changed by the black substance attacking the opponent, replacing his white lines with red ones similar to Magatsu-Izanagi. His sword also resembles a scythe as it cuts through the opponent, disintegrating them. In the True Ending Minazuki disappears and Sho inherits Tsukiyomi from the plume.

Its only skills so far from the SMT series are both the Life Drain and Spirit Drain, used as command throws. It can also combine both versions into one through a Skill Boost (since both moves share the same motion but end in different buttons for their input/command).

"A Persona of another story. An important god born from the Japanese god Izanagi, he governs over the moon and the night. There are many theories behind this mysterious god."
—Persona 5 Compendium
"I am Tsukiyomi. Madness in my right hand, tenacity in my left... Now then, who shall I break apart first?!"
—Tsukiyomi upon being summoned

Tsukiyomi is a DLC Persona belonging to the Moon Arcana, having two versions; one with his original color scheme, and a Picaro version of him. The original version is Lv. 50, whereas the Picaro version is Lv. 55. Occasionally when summoned to attack, the protagonist will shout "Sho-Time!" in reference to the puns made by Sho Minazuki. Furthermore, Tsukiyomi itself references its original users, stating that madness (Sho) is in his right hand, and tenacity (Minazuki) in its left hand.

"The moon god from Japanese mythology. Tsukuyomi was said to have been born from the right eye of Izanagi during purification after his escape Yomi no Kuni, the underworld. Tsukuyomi was the second of the "three noble children", who was commanded by his father Izanagi to watch over the night sky. In the Chronicles of Japan, Tsukuyomi and his sister the sun goddess Amaterasu part ways due to their disagreements. This is why the sun and moon appear at different times in the sky."
—Shin Megami Tensei: Liberation Dx2 Demonic Compendium 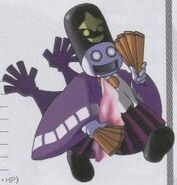 Tsukuyomi as he appears in Shin Megami Tensei IMAGINE

Tsukuyomi as he appears in Persona x Detective Naoto 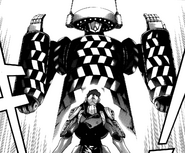 Tsukiyomi as he appears in Persona 5

Tsukiyomi Picaro as he appears in Persona 5
Add a photo to this gallery
Retrieved from "https://megamitensei.fandom.com/wiki/Tsukuyomi?oldid=390211"
Community content is available under CC-BY-SA unless otherwise noted.