Chris Hackney (SMT III Nocturne Remastered)
"...'Tis no worth in conversation. A lamb's voice is but mere bleating before the sound of my trumpet, like the falling leaves... What shall cause the downfall? The stars, the Earth, or the world of humans? Now, singest thou to me with the voice of thy soul, that thou might keep the world from ending..."
—Trumpeter, Shin Megami Tensei: Strange Journey

Trumpeter is a demon in the series.

The Trumpeter is based on one of the angels mentioned in the Book of Revelation of the New Testament. It is said that seven trumpets will be sounded by seven angels, and each trumpet signifies a different event or plague on Earth before the final moments leading to the Apocalypse.

"Angels that are said to be the ones to sound the trumpets at the time of the apocalypse. As each trumpet sounds, more and more plagues and disasters will occur, turning the earth into a land of death and suffering."
—Shin Megami Tensei III: Nocturne compendium

Trumpeter is one of the Fiends that the Demi-fiend must face while undertaking Lucifer's demonic trial in retrieving all of the stolen Candelabra.

Appearing as the fiend that holds the last missing Candelabrum, Trumpeter intercepts the Demi-fiend in Yurakucho Station (en route to the Diet Building), transporting him to another realm and challenging him to a duel. He will be faced even if the Demi-fiend has not encountered the Four Horsemen of the Apocalypse in the Labyrinth of Amala and defeated them in the Vortex World.

During the battle, Trumpeter introduces the Demi-fiend to his two distinct attacks, Holy Melody and Evil Melody; the former fully heals any character having the lowest percentage remaining HP to max while the latter instantly kills one character having the lowest percentage remaining HP regardless of their affinities. He will sound his trumpet after "every eight breaths" - meaning every eight turns, counting both the Demi-fiend's and his. If all party members are at full health, Holy Melody will randomly heal any combatant, even Trumpeter himself, while Evil Melody will randomly kill any party member but never Trumpeter.

Fully healing the party and having a demon use a Physical skill to consume HP will ensure they are the one hit by Evil Melody when it is cast. Reviving that demon with a Revival Bead and then switching them in before Holy Melody is used will see them reap the benefits instead of Trumpeter.

Trumpeter first uses Holy Melody on his first turn, the Evil Melody on his fourth turn, then switches between them every four turns thereafter for the duration of the battle. Trumpeter will actively use all-target elemental skills to target the weakness of the Demi-fiend's party members during the battle. Should there be no weakness to take advantage of, Trumpeter will begin infrequently casting Megidolaon. Using a buff skill will cause Trumpeter to waste a turn casting Dekaja, but he has no way of removing debuffs used by the party.

Defeating Trumpeter grants the Demi-fiend the final Candelabrum needed to open the Fourth Kalpa: The Candelabrum of Godliness.

The Demi-fiend can later summon Trumpeter in the Cathedral of Shadows with a Deathstone in his possession and performing a fusion that will result in a Tyrant class demon during a Full Kagutsuchi phase.

Trumpeter first appeared as a rare boss spawn within the Second Home instance before being added as one of the fiends possible for players to obtain through the 7th anniversary event. Within the Soul Prison instance, he spawned alongside Mother Harlot's second form. By defeating all three of Mother Harlot's forms, players had a chance of looting a silver statue of an angel, which granted the player the plug-in for his fusion. Trumpeter can be created through a triple fusion of Black Rider, White Rider and Red Rider. In the Abyss Tower instance, he spawns alongside Mother Harlot again.

Trumpeter returns once again as a demon of the Fiend Race, however, he must be found first on Sector Horologium to engage and destroy him so he can be fused. He possesses highly dangerous attacks such as Horn of Fate (high chance to kill either party with Expel or Curse), though he is immune to both, preventing the attack from hitting himself, Megidolaon, and Hostile Terror, a status attack that can inflict all ailments. Like other Enemy Search enemies, Trumpeter cannot be recruited through negotiation but has a unique response when talked to.

Following his defeat, Trumpeter fusion is enabled with the Fiend Converter SubApp.

Trumpeter can be found in Kiccigiorgi Forest, where the roads meet at an X. Like most of the Fiends encountered in the game, he has a 1/256 chance of spawning. His Almighty-spam mode is set by both Light or Dark Nullification. The reward for defeating him is the Refreshing Tune accessory, one of the best accessories in the game, and the ability to create him via special fusion.

Trumpeter, along with all the other Fiends, is encountered in Twisted Tokyo. Trumpeter is encountered on B36F and drops the Angel's Trumpet (Gun, 96 power, 1-9 hits to multi) from the second cycle onwards. He is fought at level 982 on cycle 9.

Unlike the previous Fiends, Trumpeter is fought as a horde rather than a single target. Multi-targeting Gun attacks like Heaven's Bow will prove to be useful in the fight. If any 1 member is Smirking, Trumpeter will spend their first Press Turn using Magaon to remove it, and at lower HP counts, may even start to use Smile Charge at the end of their turns. Prepare your own Magaon to counter that, as Evil Melody has an incredibly high instant kill rate when used while Smirking. Other than that, Trumpeter is more content on attacking with elemental attacks and Riot Gun, and if they do detect an elemental immunity they will spend a turn with a Will skill to allow the Ma-dyne to pierce.

Trumpeter, along with the other Fiends that held Menorahs and the Demi-fiend, are set to appear as part of the Return of the True Demon DLC pack. As before, defeating Trumpeter unlocks the ability to fuse him.

Trumpeter is one of the four Personas that can only be obtained using a hexagon spread fusion in the Velvet Room. Trumpeter is created by fusing Matador, Pabilsag, Daisoujou, White Rider, Taowu and Tao Tie, all of which can be obtained from various dungeons in the Midnight Channel via Shuffle Time, except for Tao Tie.

Trumpeter holds the distinction of being able to learn both Heat Riser and Debilitate. The aforementioned skills are considered special and cannot be passed on to other Personas.

Margaret's final request, which maxes out the Empress Arcana Social Link, is to create a Trumpeter with the skill Mind Charge. The easiest way to do this is to level up a Tao Tie to level 38 where it learns that skill, or to fuse Daisoujou on November 8th, and get the skill from the Fusion Forecast. Even with one of the component Personas having Mind Charge, Trumpeter's inheritance type does not favor inheriting this skill.

If Trumpeter inherits Null/Repel/Absorb Physical, Null/Repel/Absorb Fire and Null/Repel/Absorb Wind (an easy task for a hexagon fusion) it becomes immune to most attacks. Along with Debilitate and Heat Riser, this is one of best Personas for defense and support, especially against strong enemies or boss battles.

"Angels that sound the trumpets at the time of the apocalypse. As each trumpet sounds, the more plagues and disasters will occur, turning the earth into a land of death and suffering."
—Persona 5 background

"Angels that sound the trumpets at the time of the apocalypse. As each trumpet sounds, more plagues and disasters will occur, turning the earth into a land of death and suffering."
—Persona 5 Strikers background

Trumpeter is the subject of one of Lavenza's requests, "Prison Mail, Part 7." She wishes to see a Trumpeter with the Diarahan skill. Leveling Norn once to learn Diarahan and then fusing Norn with Sarasvati will allow Norn to pass the Diarahan skill on to Trumpeter during skill selection.

"Angels said to sound the trumpets at the apocalypse. Each trumpet calls more plagues and disasters, turning the Earth into a land of death and suffering."
—Devil Survivor 2 compendium

While searching for a way to cancel Benetnasch's ability to unsummon demons, the party finds an entry on Trumpeter in JP's, and discover that its melody has unusual properties and may be able to negate Benetnasch's un-summoning ability.

They head to Bugeikan Stage to unseal it, but Trumpeter refuses to cooperate at first. Fumi Kanno then chooses to "convince" it to work with them by smacking Trumpeter with laptops repeatedly until it agrees (noting that human females are quite terrifying).

During the battle with Benetnasch, Trumpeter is summoned to block the demon revoking ability. However, the party notices that Trumpeter's waves will also prevent further summoning of demons, and thus they will have to keep their demons alive to be able to damage Benetnasch. Trumpeter also needs to stay alive during the entire battle, or all their effort will be for nothing.

Trumpeter becomes available for fusion after Benetnasch's defeat. He can only be obtained by fusing Remiel with Tzitzimitl. Like most of the Fiends in this game, he has an absurdly low amount of MP.

Trumpeter appears as a demon summoned by Fumi. Unlike in the original game, there are fewer complications in summoning Trumpeter, as Fumi seemed to know about the demon's abilities and predicted Benetnasch's demon-revoking properties prior to the battle.

After Benetnasch revoked opposing demons in its range, Fumi summoned Trumpeter from a far distance. On her orders, Trumpeter emanates its own frequency waves to counteract Benetnasch's waves, which damages the "true" Benetnasch portion somewhat. However, this small victory was short-lived, as the portion containing Phecda and Merak sent out a deadly beam, obliterating Trumpeter immediately.

"Angels with trumpets that appear in the Book of Revelation. As their trumpets sound the stars will fall, fire and disaster will consume the earth as it turns into a living hell."
—Shin Megami Tensei: Liberation Dx2 compendium

Trumpeter in Devil Survivor 2 The Animation 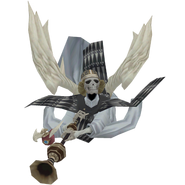 Trumpeter as it appears in Shin Megami Tensei IMAGINE

Trumpeter as he appears in Shin Megami Tensei: Strange Journey

Trumpeter as he appears in Devil Survivor 2