Trish is a non-playable character in the Persona series.

"This is a healing spring. For a price, Trish here will cure your wounds. But her fees are out of this world... Is she really a fairy? She's more devious than your average demon."
—Yukino Mayuzumi about Trish, Persona 2: Innocent Sin

Trish is massively greedy, to the point of having being exiled by the other fairies, who were disgusted by her lust for money. She does not care about others, defining herself solely by her greed. It is possible to spread rumors to guilt her into lowering her prices, but it makes no difference: she will almost instantly ignore her crisis of conscience and return the prices to her normal fees. She is also highly arrogant, caring nothing for her customers except for the massive fees she extorts from them.

Trish hosts the recovery service in the middle of dangerous dungeons. She always charges more than the healing facilities in the city because leaving and traveling back to the dungeon can be too cumbersome. Trish is of the fairy race but got exiled by King Oberon for being too greedy. She is only allowed to return to the fairy kingdom when she does enough good deeds, but things worsen as she runs an expensive healing service, frequently receiving complaints from characters of the series.

"A greedy, money-loving fairy. She was kicked out of the fairy realm and can't go back until she's done her share of good deeds..."
—Her introduction, Persona 2: Innocent Sin

Trish maintains a healing fountain at which the party can heal, generally found in every dungeon, in each of the Persona 2 games. Despite her sweet-natured appearance, Trish is notorious for being selfish, greedy and charging outlandish prices for her healing services. While restoring in town generally costs a few thousand yen, Trish tends to charge a few dozen thousand. Should the party refuse, she will generally tell them to "go and die for all [she] cares."

"A stingy fairy who is obsessed with money. She's been banned from the fairy world and can't return until she does good, but..."
—Her introduction, Persona 2: Eternal Punishment

Trish will still curse the party if they refuse to pay her. The party can also spread two rumors obtained from the Demon Rumormonger Nekomata about Trish.

The first is available as soon as Nekomata is unlocked and results in her expanding her business into a hospital/restaurant hybrid that sells ice cream.

The second rumor is available later on as the story progresses and claims that she's "reformed" her moneygrubbing ways. The outcome of the rumor can go one of two ways; it can lower the cost of her current inventory of ice cream by half, or it may add two new ice cream flavors "Lucky Ice Cream" and "North Light Vanilla" but will also double the cost of all the other flavors.

Trish also runs the only shop in the Extra Dungeon mode. The price of the items she sells is five times the pharmacy of the outside. Since the party cannot return to the city during this mode, Trish is the only means of trade.

Her namesake is used in Persona 3 as the hostess of a television show called 'Who's Who' in which characters from the prior Persona games are given short biographies on. While it's unlikely to be Trish herself, it's a potential reference, and her "Pain, pain go away" quote is still used by the TV personality. 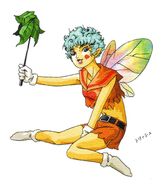 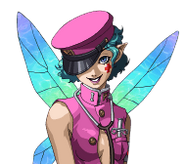 Portrait from the PSP port of Persona 2: Innocent Sin

Naoto as Trish in Persona 4: Dancing All Night

Morgana as Trish in Persona 5

Morgana as Trish (P2) in Persona 5

Illustration of Trish in a Persona 2 Eternal Punishment Comic Anthology