The Tower of Daedalus (ダイダロスの塔, Daidarosu no tō)? is a location in the series. 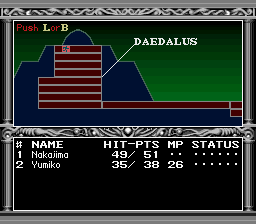 Tower of Daedalus is the first dungeon of the game. On the eighth (and top) floor is the town of Micon, where the game starts. A Junk Shop is located on the 3rd floor, where ailment-healing items and temporary HP/MP boosting-items can be purchased. On the first floor, the Minotaur, who is the main boss of the area, can be found. After his defeat, the elevator can be used. He drops the Orb of Silence, which is one of the 3 gems needed to unseal Izanami in the Sea of Flames. The Tower of Daedalus is directly connected to the Valhalla Corridor. Once the elevator can be used, Gar's Shield can be obtained near the 3F elevator, which allows Nakajima to enter Bien from the front entrance.

Similar to the previous game, the main objective is to defeat the Minotaur. However, when the Orb of Silence is used on a peculiar statue found in the Tower unseals Pazuzu, who had been imprisoned in the game by Bael. He declares the hero and his friend to be saviours, and gives the hero a COMP and his friend the "Mapper" spell. He warns the hero that demons have invaded the shelter, and tells him to defeat Nebiros, a necromancer.

Later in the game, the Tower of Daedalus can be reentered once the hero has learned the password for the Intelligence Building. Here he can find Cerberus, who is level 40. He can also help a man who knows that one of his four children has been taken by a demon, but doesn't know which exact one. Once the hero has returned the child to his father, he can confront the demon and receive the Demon Analyzer, which allows one to see info about the last five demons that have been encountered.

Retrieved from "https://megamitensei.fandom.com/wiki/Tower_of_Daedalus?oldid=338026"
Community content is available under CC-BY-SA unless otherwise noted.