Just an Extra
Cavalier (as a Mirage Master)

Touma Akagi, known as Toma Akagi in the Japanese version, is a playable character from Tokyo Mirage Sessions ♯FE.

When at school he wears standard school uniform similar to Itsuki's, except he wears with bright pink hoodie and white sneakers.

As a Mirage Master, his hair grows out and he has aqua markings on his neck and collarbone. He wears a long red jacket slightly open showing his chest and a silver headdress.

He’s a little frivolous in his speech and actions, but he's the type that puts action before thought. He's always wishing that he could be a hero, and is currently aiming to get the lead role in a Tokusatsu program called "Masqueraider."

Touma Akagi - Just an Extra
After Enter-Kingdom, Touma continued his work playing extras in live shows, slowly increasing his reputation. Eventually, he caught the attention of a famed producer who cast him as the star of one such show. Touma works hard, hoping to one day find his chance to become the hero he’s always dreamed of.

Touma Akagi - In the Kaiju Suit
Touma continued his training even after Enter-Kingdom. Taking advantage of his physical abilities, Touma became a stunt double, and a crucial part of Japanese live-action cinema. Though the audience may never see the face behind the mask, Touma continues to fight as a hero.

Touma Akagi - Pro Understudy
With his charming performance, Touma grasped the hearts of many female fans, and made a name as one of the most attractive male actors in the business. Though he found unexpected success in Japanese romantic cinema, he still dreams of heroism, and trains for his chance at the next Masqueraider audition...

Touma Akagi - Awakened Hero
After appearing as "Masqueraider Ouga," Touma found great success as an action star. He eventually wrote, directed and starred in his own hero movie, which was acclaimed for its action scenes... particularly those between Touma and his costar, the up-and-coming Riku Suzumoto. 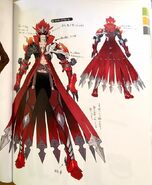 Concept artwork of Touma as a Mirage Master

Illustration artwork of Touma and the main cast by toi8

Poster of Touma as Masqueraider

Touma and Cain in Fire Emblem 0 (Cipher) by Rika Suzuki.