William Salyers
"The most important part about giving a good speech is believing in yourself... ...Perhaps one day... I will believe in myself... again. Very well. If learning how to give a great speech is what you seek, then I'd be happy to instruct you. In exchange, I would like for you to continue assisting me."
—Toranosuke Yoshida to the protagonist, Persona 5

Toranosuke Yoshida is a character from Persona 5. He is attempting to seriously enter Japan's political system in order to start changing the country, but is having difficulties doing so.

Yoshida is extremely devoted to politics and became one through the help of his mentor Kuramoto. However, when he took the position, he believed himself to be in the clear and lost sight of why he wanted to become one, eventually being shunned by most people due to his blunders and reputation. In the twenty years since he lost his position, Yoshida has considerably mellowed and realized his own mistakes, intending to return to the Diet through his own merit. Due to his devotion to politics, Yoshida is a skilled speaker and able to connect to the audience should they listen to them, something which gets the protagonist's attention. While he is occasionally dismayed at people calling him "No-Good Tora" or people intentionally trying to reveal his flaws, he remains calm and level-headed against such slanders.

As his Confidant progresses, Yoshida becomes more charismatic, eventually developing a sizable fanbase with the protagonist's aid who gets him over his self-esteem issues. He also holds no hostility towards his mentor Kuramoto, who was responsible for him being framed for embezzling funds, which surprises his old friends.

Yoshida also holds a high opinion of the Phantom Thieves of Hearts, showcasing an open mind and incredible insight: he correctly deduced that the Phantom Thieves were individuals who felt wronged by society in some way and seek to change it, even implying that they could be children.

Yoshida is an unpopular man who gives soapbox speeches outside of Shibuya Station. He was mentored by Kuramoto and was friends with Matsushita and was elected as a Diet member. However, when he took the position, he believed it to be one of luxury with little responsibility needed, which resulted in a series of unfortunate events that became known as "No-Good Tora's three strikes": missing a legislative meeting to take a personal vacation, being accused of embezzling party funds, and finally calling a voter an idiot in an open forum. This caused him to lose his position a term later and he has spent 20 years trying to regain his position, but due to his notorious reputation, he had lost the past seven consecutive elections, even though his speeches are actually worth listening to as he confronts the country's future with seriousness.

"Staging your crimes with calling cards... It's hard to believe that a student could manage this alone. An adult—for example, someone talented enough to move people with words—perhaps they coached you. ...Isn't that right!?"
—Sae Niijima talking about Toranosuke Yoshida, Persona 5

Yoshida's Confidant is one of the easiest to complete, as it always ranks up each time the protagonist goes to see him, even if the protagonist doesn't have a Sun Arcana Persona in his possession. Unlike other Confidants, Yoshida also doesn't have a Mementos Request associated with him, reducing the time required to max it out. In addition to this, certain ranks of his Confidant also increase the protagonist's Charm by 3 points. However, there is a deadline to the Confidant: on November 17, election campaigning commences, and Yoshida will no longer be able to spend time with the protagonist afterwards. He does, however, warn him about this via text well over a week before the deadline.

Yoshida's story revolves around him trying to convince others to take Japan's affairs seriously but he is unable to garner much interest due to his reputation as an inept politician. While dismayed, he does not give up and continues giving speeches with the protagonist's help. This eventually gets the attention of Councilman Matsushita, one of his friends involved in politics. The two briefly argue over their approach to public speaking, but at the end, Matsushita states that he was not the one who accused him of embezzlement. With the protagonist defending him from hecklers, Yoshida begins to grow a sizable base and Matsushita reveals that Kuramoto had caused the scandal and offers him a position as his right-hand man as he would not win the upcoming election, while Kuramoto tries to reconcile with him over the incident. Yoshida refuses both, intending to become a member again through his own merit.

Yoshida's farewell gift to the protagonist on the last day for maxing his Confidant is a Fountain Pen, which he apparently had used at the beginning of his political career. This item allows the protagonist access to all Negotiation skills once Yoshida's Confidant has been established in New Game+. 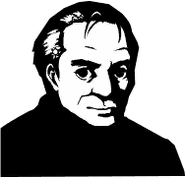 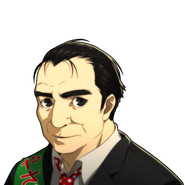 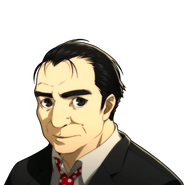 Yoshida without a sash

Yoshida in the P5A Artbook 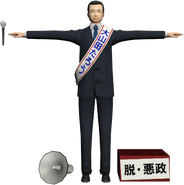