Tomoe is a Persona in the series.

Tomoe Gozen (巴御前) was a female samurai during the time of the Genpei War (1180-1185). After fighting in the Battle of Awazu, it is unclear what happened to her. Due to the number of stories of how her life went and the lack of proof of her existence, she has become a thing of legends.

When Yukiko Amagi was seen within the Midnight Channel, Chie along with the protagonist and Yosuke went inside to find her. Teddie guided them to a dungeon called Yukiko's Castle, and Chie hastily ran inside.

When the protagonist, Yosuke and Teddie managed to catch up, they found Chie facing her other self. Chie refused to accept her other side, which turned it into Shadow Chie. However, the protagonist and Yosuke managed to defeat her, thanks partly to Yosuke's Persona Jiraiya and its ability to use Wind spells, which was the Shadow's weakness. With their help, Chie accepted her other self, which then manifested into Tomoe.

Tomoe learns a limited amount of spells early on and then focuses on physical attacks, since she is mainly designed for physical abilities.

Once the Chariot Arcana Social Link is maxed, Tomoe will transfigure into Suzuka Gongen. This Persona will inherit all the skills learned from Tomoe.

After completing a song, Tomoe is summoned to play a trumpet.

Tomoe with the other Personas of the team

Concept art in Persona 4 The Animation

Tomoe in Persona 4 The Animation

Tomoe appears in Persona 4 The Animation

Tomoe after being summoned

Tomoe in Persona 4 The Golden Animation

Tomoe playing a trumpet in Persona 4: Dancing All Night 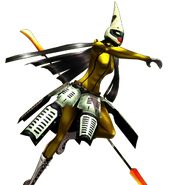 Tomoe in Persona Q: Shadow of the Labyrinth

Tomoe in Persona Q: Shadow of the Labyrinth Side P3

Tomoe in Persona Q: Shadow of the Labyrinth Side P4