Edit
watch 02:23
Wiki Targeted (Games)
Do you like this video?
Play Sound
"Several decades after the great destruction... While cultivating the wilderness, fighting off packs of demons, and through countless deaths, humanity survived... but people were not strong enough to survive without someone or something to cling to or to rely on... The Mesian religion preached the advent of a savior, gathered together believers and built a city on the site of the old cathedral... The city came to be known as Tokyo Millennium."
—Shin Megami Tensei II intro, Aeon Genesis English version.

Tokyo Millennium (TOKYOミレニアム, TOKYO Mireniamu)?, also known as the Overworld by the residents of the Underworld, is the main setting which serves as the stage for the events that unfold in Shin Megami Tensei II.

It was erected by the few groups of humans who managed to survive the calamity of the Great Cataclysm depicted in the first game, on the same site where the Basilica once stood. Its construction was almost entirely supervised by the members of the Order of Messiah. It is divided into numerous districts, each with its own functions and ruler.

As it was previously stated, Tokyo Millennium is divided into several different regions, each one with its own duties and lesser areas. The main four are as follows:

The core of Millennium, which controls all aspects of life in the city.

By far the most populated zone of Tokyo Millennium, whose control was left by the Center entirely in the hands of a woman who attends by the name of Madam. A free area that was created with the purpose of letting people enjoy and pursue common earthly delights. The Colosseum situated here, along with the casinos, attract countless people everyday, and as result, peace has flourished in Valhalla. Of course, it would later be discovered (in the most tragic way) that this development wasn't exactly in good accordance with what the government of the Center had in mind for it.

Madam's own private, and heavily guarded, mansion can be also found here. Along with, as it was mentioned above, Valhalla's immense Colosseum, which is known for frequently being the stage of violent fighting tournaments between modern Gladiators. It also has various casinos, stores and dancing discos; and of course, hass vast slums, which welcome those who are seeking a safe refuge from the eyes of the law in any way.

A seemingly perfect world, where there are no demons, luxurious houses and great trees fill the landscape, and all the ones who reside there are happy; interpersonal conflicts being all eradicated.

It is under the control of Gimmel, who states that Arcadia was designed to be a prototype for the future Millennium Kingdom that the Center wants to establish, a world of everlasting peace under the watchful eye of God and its laws. According to him, the project was a great success, until Aleph and Hiroko discovered its true abominable nature.

Holytown was built in order to function as a religious center for Millennium. The original plan involved building a great church in it, followed by the citizens of the Center moving near its grounds, where a residential area would be formed and then people would be able to undergo daily church services. However, it was a colossal failure, as the majority of the populace felt more attracted to the ordinary pleasures promoted by the Valhalla area.

It suffered an attack by a King Frost and a Basilisk (who froze the area and poisoned its streets, respectively), but both of them were defeated by Aleph and Beth. It was also through the broadcastings of the Millennium News Network here that Zayin could stage his coup.

The industrial center of Millennium. It is here where the commodities that the residents of the city need to survive are produced. A large excavation and mining project site can also be found here, along with the farming area, where genetically engineered copies of the demon Nandi, called "Demi-Nandi," are bred for food.

The workers at the mining area were being terrorized by a devious Betelgeuse, while at the same time, and probably by the latter's influence, the Demi-Nandis started stampeding. Both of these occurrences were taken care of by Aleph and Beth's combined efforts.

Tokyo Millennium as it appears in the PSX remake's intro 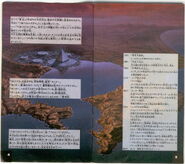 Tokyo Millennium as it appears in the manual