Toki is a character from Shin Megami Tensei IV Apocalypse.

Toki is a young mid-teen girl with red eyes and wears a black oni mask with messy lavender hair attach to it to conceal her face. She wears all black bodysuit with transparent dark purple poncho.

Without her mask reveals that she has long black hair and has very pale complexion.

She is first encountered when Nanashi meets with the current leaders of the Ring of Gaea, Mii and Kei, in order to infiltrate Tsukiji Konganji. Toki would show them the way into the temple, though she states that her task is to assassinate two individuals, those being Maitreya and Flynn, the reason being that Kei and Mii cannot forgive Flynn for killing Yuriko. Upon finding Flynn, she tries to assassinate him on the spot, but her attempt is stopped by Isabeau, who declared she would not allow her to kill Flynn. Toki tries to eliminate them in order to get at Flynn, but she is easily defeated and repelled back the party. Maitreya appears and knocks her away, knocking off her mask in the process.

After Krishna reveals that Nanashi and Asahi were the ones who unsealed him, and that Nanashi was in fact nothing but a corpse revived by the demon called Dagda, Toki aids them in their escape, but not before declaring that she will settle the score with them. She once again appears when the party learns how to eliminate the Tokugawa Mandala erected by the Divine Powers, as it is preventing them from summoning demons. Due to the effects of the Aether emitted by the jars gathering the fuel for the Mandala, a person's mental state will be left horribly scarred unless they are strong enough to resist it's affects. Toki, having been raised to live a life without emotions, opts to seal the jars, despite everyone's obvious distrust towards her. However, they agree to let her help.

As they seal the jars, Toki is visibly being affected, ranging from different emotions: she felt that the whole situation was completely unfair and that she was angry at everything, an overwhelming sense of hunger for sweets, a desire to simply do nothing, overcome by a sense of arousal, or even ranting that no one was recognizing her for her loyalty and dedication, though she overcomes these urges quickly. As she seals the final jar, she is attacked by Maitreya, though the party quickly defeats him. They also encounter a fragment of Inanna, the Mother of All, who demands that Danu return the power she has back to her. The party manages to weaken her, and she attempts to try and possess Toki, though Gaston saves her and destroys the fragment.

After awakening, she thanks Gaston, much to the surprise of everyone, though she says it's natural that she thank someone. With her task now complete, she returns to the Ring of Gaea, though she strangely shows infatuation around Nanashi, even becoming flustered as she bids him farewell. She crosses paths with the party again after they have successfully retrieved Flynn from the Divine Powers after having defeated Krishna, defecting from the Ring of Gaea, as they are attempting to kill Flynn for having killed their original leader. Toki mocks them by saying that the Ring of Gaea believed that power was what mattered, and that they were trying to cling to an old state of order rather than welcome the new order that would be brought about. Kei and Mii call her expendable, and attempt to kill her along with Nanashi's party, though they defeat them, and take their leave.

Much to Asahi's annoyance, Toki has begun to show affectionate feelings for Nanashi, referring to him as "Master". She even tries to confess her love to him at some point, but is interrupted by Asahi, who is vehemently against her.

After Asahi is devoured by Shesha, and the Cosmic Egg is formed, it is revealed that Toki had been possessed by the fragment of Inanna, due to her exposure to the Aether. As a result, her mind becomes warped, becoming obsessed with Nanashi and proclaiming her love for him, even trying to bare his "child" at Krishna's suggestion, though in reality, he is simply reviving Maitreya as Mitra-Buddha. When the party fights Inanna, Toki manages to assert control for a time, and confesses that she had wanted to be by Nanashi's side, trying to fill the void in his heart, but is frustrated that he is still waiting for Asahi. She tells him that she loves him, over and over, until asking him to save her.

After Inanna's defeat, Danu absorbs the remnants of her power, thus freeing Toki from her control. Her being possessed by Inanna apparently had altered her feelings on Nanashi in a rather embarrassing manner, as she does not recall her ever calling him "Master." Eventually, however, she admits that she feels drawn to Nanashi, and asks him if she could call him "Master" in private.

In the Peace Route, Toki aids Nanashi to defeat Dagda and stop his goals of creating a new universe by hijacking Krishna's plans, later going on to help him defeat YHVH. After the battle, she and the group part ways for the time being, saying that she is going to continue her training, stating that they might meet as enemies again, though she suggests something else when she looks at Nanashi, much to Asahi's chagrin.

In the Anarchy Route, Toki and the rest of Nanashi's friends try and stop him and Dagda from using the Cosmic Egg. However, she falls like the rest of them. She says that she wanted to try and stay by his side, even though it meant replacing Asahi, but was fine with it. Should Nanashi hesitate to kill her, she calls him kind, and confesses her love to him before he kills her. Afterwards, her soul is taken by Dagda.

She doesn't speak much because she's been taught not to show her emotions out loud. As revealed in the Database, her parents were devoted to the Ring of Gaea, and gave her up to have her trained. Since then, she has rarely expressed any emotion, separating them from the tasks at hand. She develops feelings for the protagonist, and is not afraid to show it.

Similar to Gaston, Toki is mostly useful in grinding for her instant death attacks with pierce property. Most of her attacks only target a single enemy, unlike Gaston her interruptions do not use up the player's turn icon. In the depths of Twisted Tokyo or YHVH's Universe, where enemies prove difficult to defeat due to massive HP reserves, her instant kill attacks will prove drastically useful in shortening battles or even immediately taking out one or two waves of hordes.

However, because she is rarely targeted by the enemies player's party will have to pay the price by getting attacked at most of the turn in battle. She is not so good when handling boss fight since she doesn't have any passive skills that can increase her power, although she will still actively use her Sneak Attack.

Illustration of Toki and the main characters by Masayuki Doi 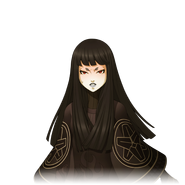 Toki's portrait without her mask 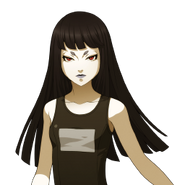 Toki without her mask
Add a photo to this gallery
Retrieved from "https://megamitensei.fandom.com/wiki/Toki_(Shin_Megami_Tensei_IV_Apocalypse)?oldid=396082"
Community content is available under CC-BY-SA unless otherwise noted.