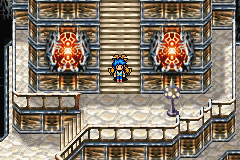 Time Tower (時の塔) is a tower in the Devil Children series.

Time Tower is a tower looming over Valhalla and is the link between Valhalla and Time's Edge. This tower is where both Jin and Akira first enter the world and must return here to leave it for another. The Time Tower has an Inn that is free to stay at, however it will still cost macca to revive a demon.

The revived Imperium sends the assassins Barchiel and Mizuchi to kill the Devil Children while they are still here at the tower after meeting up with Amy, only for their demon partners to intervene and be defeated. This serves as the characters base of operations until the prologue is over, with a different route for Jin and Akira being opened up afterwards.

Retrieved from "https://megamitensei.fandom.com/wiki/Time_Tower?oldid=391488"
Community content is available under CC-BY-SA unless otherwise noted.