The Time Count is a non-player character from the Persona 2 duology. Much unlike other NPCs, he has a very insightful view of the events going on in the story.

"A pawn has meaning only if it moves... It won't be much, but I'll lend you my strength."
—Time Count, Persona 2: Innocent Sin

The Time Count is the enigmatic owner of the Time Castle Shop in Rengedai, which ostensibly sells antique clocks, and does not seem to hold any importance for the party. However, if the right rumors are spread, the Time Count will offer services of selling weapons (in Innocent Sin) or Spell Cards (in Eternal Punishment), and he will also extend a registry service where rare cards are added to the shop list. The rarer the card, the more expensive it is.

The most eye-catching accessory of the Time Count is the monocle in his left eye that seems useless but bears a clock design. He seems to be aware of more things than he's letting on, and his indirect gestures of assistance towards the party seem rather dubious, ranging from his hints of "playing with rumors," up to handing a flower to Maki Sonomura if Tatsuya's party spread a rumor that he did so, who later passes it on to Jun Kurosu as his ultimate weapon.

Throughout the games, the Time Count seems to know everything that is happening and makes numerous nihilistic comments towards the party (he also says "That's a contradiction." a few times). Later in Eternal Punishment, as soon Tatsuya meets the Time Count he notices something wrong about him and after a while realizes that the Time Count is "him." Assisting the party was all part of his plans from the very beginning, as everything seems to be working toward the end he imagined. 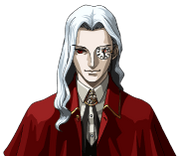