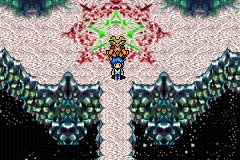 Time's Edge is the link between worlds and times.

Time's Edge exists between time and space, it's purpose it to link worlds through portals.

The portals on the left are only accessed in DemiKids: Dark Version and lead to Present Dem, Future Rem and Past Dem.

Time's Edge can only be reached after traversing the Angel's Tower or Akuma no Hokora. It connects to Makai and Tenkai. A gate is found on the top of the Tower of Babel, and both Jin and Akira fight each other here whileunder when the power of illusions both enemies group use, making them appear as Mephisto and Isaac.

Retrieved from "https://megamitensei.fandom.com/wiki/Time%27s_Edge?oldid=168393"
Community content is available under CC-BY-SA unless otherwise noted.