Edit
watch 02:58
No Man's Sky Update - The Loop
Do you like this video?
Play Sound

"Beastie Game"
"Not an Illusory World"

Tiki is a recurring character in the Fire Emblem series, particularly titles set on the continent of Archanea/Ylisse. She is the last of the Divine Dragons and the only daughter of their leader, Naga. Originally put to sleep by Naga in order to contain her power, she was awakened by the Fire Dragon Bantu, who took pity on her.

During the events of (New) Shadow Dragon and the Blade of Light, Tiki is brainwashed by the evil sorcerer Gharnef, but is saved by Bantu and the Lord Marth. During the events of the game's sequel, (New) Mystery of the Emblem, Tiki is again put to sleep in order to prevent her from going wild, but is stabilized and awakened after Marth reforges the Fire Emblem into the Shield of Seals.

She reappears 2,000 years later as an adult during Fire Emblem Awakening, where she now resides on the continent of Valm (formally known as Valentia, the setting of Fire Emblem Gaiden) and is hailed as the Voice of the Divine Dragon.

She is the key visual character of a vocal software called "Singaloid TiKi/Uta-loid Tiki" that is currently a huge hit among Internet users. It’s currently an ongoing trend with the youngsters to upload new songs by Tiki on the Internet.

Tiki resides in the Bloom Palace and is in charge of creating new weapons, skills and class changes for the playable characters. She appears to be involved in Mamori's special attack. She treats the game's protagonist Itsuki Aoi like a big brother.

In her first side quest: "I'll Tiki-Tiki You (For Reals)," she requests Itsuki to search for Tiki=Waifu, a popular Uta-loid Tiki song composer, who's been MIA as of late, which the search eventually leads Itsuki to Illusory 106. After he found her in the mid-boss arena, Tiki is seen depressed as she unable to fight and she wants to help him and allies in battle even though she can't leave the Bloom Palace until then thanks to Itsuki's encouragement, Tiki is now granted with a new back-up skill, Idol_Safety.exe.

In her second side quest: "Coffee and Donuts", she requests Itsuki to purchase a hard-to-come-by donut called a "honey-caramel-banana-chocolate donut" that could be sold at Hee Ho Mart thanks to Tsubasa telling her about it. When he gets there, however, he finds a high school girl who bought every last donut in the Mart. Still determined to get one for Tiki, he begins looking around Shibuya, eventually running into Tiki=Waifu again, with a bag of donuts from Hee Ho Mart, and turns out to be the one who bought all the donuts, though parts with the bag on hand to Itsuki as thanks for saving her. With donuts in hand, he returns to the Bloom Palace, though since Tiki can’t interact with normal world objects, she lives vicariously through Itsuki as he eats the donut for her in her stead. After doing so, Tiki is elated and is granted the backup skill “Performa_Finder.exe”.

After defeating the Shadow Dragon, Tiki and the others returned to their world, but the Uta-Loid Tiki still continued to receive updates and patches, and remained a cultural icon and a favorite to the public. Tiki’s popularity lasts even after Enter-Kingdom, and she eventually becomes a virtual idol known worldwide.

After Tiki and the others returned to their world, they wrote a record of their adventures in order to one day fulfill their promise to Itsuki—a story they called the Tome of Mirages. It spread all over their world, attracting interest toward the performing arts.

Tiki and the others returned to their world and committed their adventures to a script. Their singing and acting was admittedly clumsy, but the denizens of their world applauded their efforts, and it became the first step in reviving the arts in their lands. Whenever the group went, a new delicacy was introduced to the locals almost overnight: a fried ring of sweet dough.

With the Shadow Dragon slain, Tiki and the others returned to their world. There, with everyone's help, Tiki held a live concert. Before a massive audience, she sings “This World Isn’t an Illusion”, a song tied to her memories of Itsuki, with all her heart. The faint glimmer twinkling in the audience may be the first new flicker of Performa... 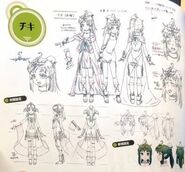 Artwork of Tiki by toi8

Illustration artwork of Tiki and the main cast by toi8

Illustration artwork of Tiki, Itsuki and the main female cast by toi8 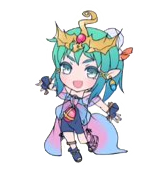 Artwork of Tiki for Fire Emblem 0 (Cipher) by cuboon