Satomi Arai (Strange Journey Redux)
"Faster than humans can fill the land... Faster than the humans can destroy the planet... I shall give birth to demons to keep them in check! So long as this land is abundant with seeds, I will birth an endless orchard of demons!"
—Tiamat, Shin Megami Tensei: Strange Journey

Tiamat is a demon in the series.

Tiamat, also known as Ummu-Hubur, is the Babylonian personification of salt water and primordial chaos. In the Babylonian creation myth, Enuma Elish, she is described as the mother of many of the monsters featured in Mesopotamian mythology, including dragons, scorpion men and bull men. There are no known depictions of Tiamat, but it is generally agreed she was envisioned as a monstrous serpent or dragon. She is rarely mentioned in sources other than copies of the Enuma Elish narrative, and wasn't an object of religious cult.

Tiamat and her mate Apsu, the personification of the underground freshwater ocean, were described the ancestors of the entire Babylonian pantheon. However, Apsu wanted to exterminate his children, which lead first to a conflict between him and the god Ea (Babylonian counterpart of Enki), from which the latter emerged victorious, and then to the central event of the myth, Tiamat's battle with Ea's son Marduk.

While Marduk's battle with Tiamat is sometimes incorrectly viewed as the most ancient version of the Chaoskampf narrative (the battle between a god or hero and a chthonic or aquatic monster, usually a serpent), it was most likely only compiled during the reign of the Kassite dynasty of Babylon, and as such was probably influenced by the earlier tales of Hadad's battle with Ym, Set's with Apep or Teshub's with Illuyanka, Hedammu and Ullikummi.

Tiamat guards the entrance to Ground Zero in the Ginza Underpass that leads to several of the cities still left in Tokyo. In the final dungeon, it becomes a common encounter.

Tiamat is a boss fought in the Hod sphere of the Expanse. Upon defeat, she drops the Ayin key.

"The primordial goddess of Babylonian lore.
She governs the sea and gave birth to many deities with her consort Apsu, the god of fresh water. When war broke out between her and those gods, she created 11 monsters to fight with her, but they were defeated by Marduk. Her body was ripped apart and used to make the world."
—Shin Megami Tensei: Strange Journey Compendium

Tiamat is one of the four Mothers of the Schwarzwelt (alongside Maia Ouroboros, Maya, and Mem Aleph) in Strange Journey. She appears in Sector Fornax and is responsible for rebirthing Morax, Asura, Mitra and Horkos.

Tiamat's moveset is focused on Ice, with her signature Mother Earth skill doing ice damage to the entire team and healing her based on how hard it hit. Bring demons with ice immunity or resistance to blunt her offenses. Also be aware of her Sunset Melody that inflicts Almighty damage and lowers attack, and Luster Candy that buffs all her stats.

Tiamat's AI is rather responsive regarding her unique skills. She uses Pure Blue, which purges debuffs and restores about 1000 HP to her, if she gets fully debuffed - to avoid seeing this, keep her at -3 debuffs at best. She also uses Diarahan if you throw up any attack reflecting item or skill.

The leader of Team Red in the Challenge Quest, RxW Smacktacular XIII. A god among gods, she tells Flynn she doesn't understand why the humans would participate in these games, as she was summoned and ordered by the Ashura-kai to participate rather than choosing to. Since she can't disobey, she wishes to just get it over with. After her defeat she is impressed by Flynn and admits that she never thought she would get beaten. Asking if he is Flynn and having it confirmed leads her to tell him the Ashura-kai were wary of having him participate in the games, and that things have gotten interesting before crumbling. She later becomes a common encounter in Infernal Tokyo.

"The primordial goddess of Babylonian lore.
She governs the sea and gave birth to many deities with her consort Apsu, the god of fresh water. When war broke out between her and those gods, she created 11 monsters to fight with her, but they were defeated by Marduk. Her body was ripped apart and used to make the world."
—Shin Megami Tensei IV Apocalypse compendium

Tiamat can be found in Tsukiji Hongwanji or she can evolve from Mushussu once it reaches level 52. She can teach Nanashi the Ice Breath, Megidola and Silent Prayer skills through her Demon Whisper. Tiamat benefits from learning Ice and Almighty skills. At level 60, Tiamat will evolve into Ym, provided that Nanashi can control the result.

Tiamat is a boss in Paranoia's Tebel on the Dark-Law/Chaos routes.

"...WHY DOST THOU AWAKEN ME? I HAVE LONG FORGOTTEN BATTLE... FOOLISH ONE... THE POWER OF MAN IS NOT ENOUGH TO DEFEAT ME..."
—Tiamat, Devil Summoner: Soul Hackers

Tiamat is one of the two ancient demons inhabiting the ruins beneath Nikamimon, the other being Apsu. Their presence interfered with the Phantom Society's plans of installing Manitou at the site, so Vice-Minister Nishi hired Naomi to eliminate one of the demons to make room.

During the associated Vision Quest, the player must choose whether Naomi eliminates Tiamat or Apsu. If Tiamat is confronted, upon its defeat she curses Naomi and kills her as it dies. The goddess's power is later absorbed by Manitou, which gives it strong magical attacks but a vulnerability to physical attacks.

"A cruel, short-tempered demon who can send the mightiest demon to its knees."
—Demonary, DemiKids

Tiamat can perform the combo Hydra Blast with Succubus, Acid Rain with Saggath, and Stun Claw with Nergul.

Tiamat as she appears in Megami Tensei II 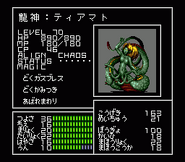 Tiamat as she appears in Shin Megami Tensei (Sega CD)

Tiamat as she appears in Card Summoner

Tiamat as she appears in Last Bible II

Tiamat as she appears in Last Bible Special
Community content is available under CC-BY-SA unless otherwise noted.
Advertisement