Throne is a demon in the series.

The Thrones, also known as the Elders, are the third of the First Sphere of angels in Christian angelology. They are known as the angels of knowledge, and has also been compared with Erelim, Galgalim and Ophanim.

They are living symbols of God's justice and authority. They come the closest of all angels to spiritual perfection and emanate the light of God with mirror-like goodness. They, despite their greatness, are intensely humble, an attribute that allows them to dispense justice with perfect objectivity and without fear of pride or ambition.

Because they are living symbols of God's justice and authority, they are called Thrones and have as one of their symbols the throne. In contrast to their appearance, Ezekiel 1:15 describes Thrones as eye covered wheels, rather than humanoids. One of the Dead Sea Scrolls construes them as angels, late sections of the Book of Enoch portray them as a class of celestial beings who never sleep, but guard the throne of God.

Some Christian theologians that include the Thrones as one of the choirs do not describe them as wheels, describing them as adoring elder men who listen to the will of God and present the prayers of men. The Twenty-Four Elders in the Book of Revelation are usually thought to be part of this group of angels.

In Asian regions, their title translates to "Angel of Seat" (座天使, Zatenshi)?.

"Origin: Israel. They are the third highest rank of angels. They are the angels of dignity and justice who carry God's throne and govern thought. They are given the task of deciding how to dispense God's decisions. They have a pair of green burning wheels and are said to be God's chariot."
—Shin Megami Tensei A-Mode DDS dictionary

Throne evolves into Uriel through leveling up. The Demi-fiend must have defeated Uriel as a boss at Mifunashiro before being able to evolve him.

Throne can only be acquired through fusion. He appears as an uncommon mid-boss and a nightmare mob in Shinagawa Catacomb instances, can be found among the invasion forces on the weekly invasion of Ueno, and assists Metatron in Diaspora Shinagawa.

"The third of the nine orders of angels. It is said that they carry the throne of God. Of the angels with physical form, they carry the highest rank."
—Shin Megami Tensei: Strange Journey compendium

Throne will be one of the angels guarding Naraku in the "Escorting Your Comrade" Challenge Quest, seeking to prevent Flynn from guiding Navarre to safety.

Throne can be encountered in the Firmament areas of the Sky Tower, but it cannot be recruited through the Scout ability. Alternatively, Throne evolves from a Dominion at Lv.56. Throne can teach Nanashi the Agidyne, Mahamaon, Mediarama and Maragidyne skills through its Demon Whisper. Throne can evolve into Cherub upon reaching Lv.66.

"The third of the nine orders of angels. Their Hebrew name, Ophan, carries the meaning of "wheel".
They are the highest ranking angels to carry a material body and are tasked with carrying the seat of God."
—Shin Megami Tensei V lore

"3rd in the hierarchy of angels, residing in the 1st sphere. Their alternate name, "Galgal," means wheel. They serve as the chariots of God."
—Devil Summoner: Raidou Kuzunoha vs. The Soulless Army devil chart

Throne begins appearing in Episode 9 within the alternate reality of Dark Ginza-Cho as a random encounter. They will also appear as support for the Muspell demons acting as guardians within the area.

"The third of the nine orders of angels. It is said that they carry the throne of God. They are angels of knowledge."
—Persona Q: Shadow of the Labyrinth compendium

"The third of the nine orders of angels. They are the angels of dignity and justice who carry God's throne and govern thought. They are angels of knowledge."
—Persona 5 background

Throne is the seventh Persona of the Justice Arcana and is unlocked for advanced fusion once the protagonist has reached level 5 of the Strength Confidant with Caroline and Justine. Throne can only be acquired through fusion and its advanced fusion recipe consists of Power, Melchizedek and Dominion. Throne is one of three Personas to learn Invigorate 3, Bless Amp, Evade Curse and Auto-Maraku. When itemized with an Electric Chair execution in the Velvet Room, Throne yields an Invigorate 3 Skill Card.

Throne can appear in Qliphoth World under the name "Fire Assassin".

"The third of the nine orders of angels. They are the highest order of angels with physical form and also go by the names of Ofanim and Galgalim which means "wheel", They are called "The Throne Carriers" but in fact they themselves were vehicles resembling the modern-day tank."
—Shin Megami Tensei: Liberation Dx2 compendium 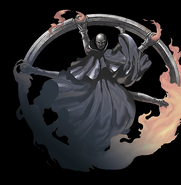 Throne as it appears in Persona 3

Throne as it appears in Shin Megami Tensei III: Nocturne

Throne in Raidou Kuzunoha vs. The Soulless Army 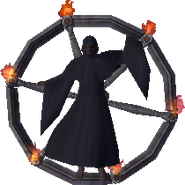 Throne as it appears in Devil Summoner: Raidou Kuzunoha vs. The Lone Marebito 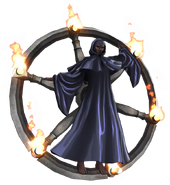 Throne in in Persona O.A.