Thor is a demon in the series.

Thor (Old Norse: Þórr), also known as Thor Odinson, is the red-haired son of Odin and Jord, and is the god of lightning, thunder, storms, sacred groves and trees in Norse mythology and Germanic paganism. Thor is one of the most powerful gods and uses his superior power to protect Asgard and Midgard. Due to his lust for battle and incredible prowess, Thor is also portrayed as a war god and also an agricultural god due to his status as a weather deity that aids in the growth of crops. His belt Mejingjard doubles his strength and lightning flashes every time he throws his trusty hammer, Mjölnir.

Most surviving stories relating to Germanic mythology either mention Thor or center on Thor's exploits. Thor was a much revered god of the ancient Germanic people from at least the earliest surviving written accounts of the indigenous Germanic tribes to over a thousand years later in the late Viking Age. Thor was very talented at slaying the Jotuns; many of his stories revolve around violent episodes between him and his enemies. One of his exploits, includes his relentless slaughter of his foes and fierce battles with the monstrous serpent, Jormungandr, and his foretold death by succumbing to its venom, during the events of Ragnarök are recorded throughout sources in Norse mythology.

Thor was appealed to for protection on numerous objects found from various Germanic tribes. Miniature replicas of Mjölnir, the weapon of Thor, became a defiant symbol of Norse paganism during the Christianization of Scandinavia. Casting molds have been found for the production of both Thor's hammers and Christian crucifixes, and at least one example of a combined crucifix and hammer has been discovered.

Kaneko's design for Thor draws inspiration from the 1982 film Conan the Barbarian's design for the character Conan, played by Arnold Schwarzenegger.[1]

"Origin: Scandinavia. The Aesir thunder god of Norse mythology. He rides a chariot pulled by two goats, and wields the hammer Mjolnir. He also wears the belt Megingjoro and iron gloves called Jarngreipr. He is the god of lightning and thunder, as well as fertility. At Ragnarok, he will defeat Jormungandr, but will succumb to its venom."
—Shin Megami Tensei A-Mode DDS Dictionary

Thorman is the American ambassador to Japan. He requests the aid of the protagonist in defeating Gotou to prevent the demons from overrunning the Earth.

Later in the story, he reveals himself to be the demon Thor, an agent of YHVH dedicated to the ideal of the Thousand Year Kingdom. He was sent to Earth after discovering that Gotou discovered a way of summoning demons from the Expanse to the human's realm and was tasked with stopping him.

In the Law route, Thor congratulates the protagonist for aiding him in the purification of Tokyo. In the Neutral and Chaos route, he fights the party. Regardless of the options, it is too late to save Tokyo from the "Hammer of Thor," a cluster of nuclear ICBMs used to purge the demons. With this, Japan is completely obliterated.

Thorman was briefly mentioned as the one who started the Great Cataclysm. His true form, Thor, can be fused at the Cathedral of Shadows.

Thor appears as the boss of Shibuya's Celu Tower gold-level instance. By defeating him, players have a chance to obtain the Ving-Thor, which they can turn in to the old man NPC in front of the boss room to obtain the ability to fuse him. Thor is a special triple fusion of Odin, Loki and Dwarf. He can be summoned temporarily onto the field when a player has an Odin and Loki within their COMP and a full fusion gauge. He also appears as a boss within the Shinagawa Diaspora instance as one of the two key-bearing mobs players must defeat in order to summon Metatron. His weapon Mjolnir and his cloak can be obtained as player equipment.

"The Norse god of thunder. He wields Mjolnir, a hammer that returns to its owner after being thrown."
—Shin Megami Tensei: Strange Journey compendium

Thor takes the form of a human called "Hunter Kyuzou" in the Challenge Quest Save the Old Man. He sends a request to protect an old hunter from his enemies. After accepting the quest, Flynn is caught in a misunderstanding and ends up facing other hunters who had gone there to help the old man. Finally, a hunter wearing a cloak covering his entire body appears, only to throw it away and reveal his real identity as the Kishin Thor. He immediately attacks the hunters. However, after being put in a disadvantage, a majestic voice stops the battle. It turns out that the old hunter was actually an amnesiac Odin, and Thor made him watch those battles to make him recover his memories through the excitation of combat. Thor returns to Asgard alongside his lord.

Thor can teach Nanashi the Charge, Ziodyne, Hades Blast and Berserker God skills through his Demon Whisper. He benefits from learning Electricity, Physical and support skills.

Thorman is briefly mentioned again having died of heart failure at the age of 68. He had apparently respected Japan and was fostering friendship between the two countries after he became ambassador.[2]

"The Norse god of thunder. He wields Mjolnir, a hammer that returns to its owner after being thrown.
It is said he and the World Serpent Jormungandr will kill each other at Ragnarok."
—Devil Summoner: Soul Hackers 3DS compendium

In the 3DS remake, a variant of Thor is unlocked by Nemechi's female angel form and costs 500 D-Souls. His artwork is based on his appearance from Shin Megami Tensei III: Nocturne. While the normal version of Thor is level 59, this variant is much more powerful and at a much higher level at Level 72, making it the highest level Kishin demon in the remake, just exceeding Marici by one level.

"Norse god of thunder and nature. His hammer Mjolnir can crush any enemy and return to Thor's hands.
On the day of Ragnarok, he and Jormungand, the Midgard Serpent, are fated to kill each other."
—Devil Summoner: Raidou Kuzunoha vs. the Soulless Army devil chart

"Norse thunder god, and son of Odin. He wears the belt Megingjard, which doubles his power. Lightning flashes whenever he throws his hammer, Mjolnir."
—Persona 3 compendium

Thor is the highest level Persona of the Chariot Arcana. He can be fused after maxing out Kazushi Miyamoto's Social Link. His Heart Item is Lightning Gloves, which nullifies Electricity damage dealt to the bearer.

When he is fused with any kind of Nihil weapon, he produces the weapon Mjolnir, his iconic hammer.

Mjolnir has an attack value of 340 while having a hit rate of 80. It strengthens Electricity attacks as if the bearer has Elec Boost. It deals Electricity damage when the protagonist attacks with it instead of Strike damage.

Thor can be fused after maxing out Rio Iwasaki's Social Link, in the female protagonist's route.

Thor was summoned in the last second and used an Electricity spell on the Arcana Fortune. He obtained him after the Arcana Chariot was defeated.

"Norse thunder god, and son of Odin. He wears the belt Megingjard, which doubles his power. Lightning flashes whenever he throws his hammer, Mjolnir."
—Persona 4 compendium

A Persona of the Chariot Arcana, aside from fusion, the only way to find this Persona is through Shuffle Time in one specific portion of the Magatsu Inaba dungeon; the Magatsu Mandala. Thor is the only Persona that can learn the ultimate Electricity skill, Thunder Reign.

"The Norse thunder god and son of Odin, Thor owns the power enhancing belt, Megingjard, and wields Mjolnir, a hammer that causes lightning to strike and returns to its owner after thrown."
—Persona 5 background

Thor is the ninth Persona of the Chariot Arcana and can be found as a Shadow in the Battle Arena of Niijima's Palace and the Depths of Mementos, with the title "Thunder Emperor." He is the first Persona to learn the Elec Amp skill and one of four Personas to learn the Heat Up skill. When itemized using an Electric Chair execution in the Velvet Room, Thor will produce the Mjolnir bludgeon for Ryuji Sakamoto, which has 254 ATK, 88 ACC and adds the Elec Boost effect to Ryuji (does not stack with the Elec Boost skill). Thor is an ingredient for the advanced fusion recipe to summon Chi You.

When fought in the Battle Arena, the "Thunder Emperor" lacks his usual weakness to Psy skills in this battle and will alternate between using Charge and Concentrate before attacking with Physical or Electricity skills respectively. However, there will be an extra turn spent between the charging skill and Thor's attacks, allowing the protagonist to prepare for the attacks. Personas like Girimehkala and Rangda can repel his Physical attacks back at him for additional damage (however, Rangda is naturally weak to Electricity as well), but trying to repel Thor's Electricity attacks will result in the damage being nullified.

"A warrior with a powerful, mythical hammer that magically returns when it is thrown."
—Demonary, DemiKids

Thor can use the combo Thunderblast with Neo Kem and Ragnarok with Jormung.

Thor is a common enemy on the 6th Layer of the Sun.

"The Norse god of thunder and fertility, whose strength is incomparable. He is a heroic and honest god.
He is worshiped mainly by farmers and is most known for defeating giants. He wields Mjolnir, a hammer which returns to its owner after being thrown. He and the World Serpent, Jormungandr, are fated to kill each other at Ragnarok."
—Devil Survivor 2 compendium

"The Norse god of thunder. Later known as the god of agriculture, he was worshipped mostly by farmers. Thor is a heroic and honest god with unrivaled strength. Some claim he could even swallow a cow whole. With the magical hammer Mjolnir which returns to its owner after being thrown, he smites his enemies with ease."
—Shin Megami Tensei: Liberation Dx2 compendium 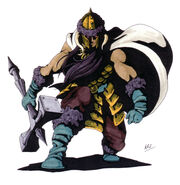 Thor as he appears in Shin Megami Tensei

Thorman's character sprite as it appears in Shin Megami Tensei 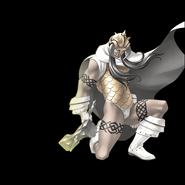 Thor as he appears in Persona 4 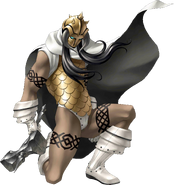 Thor as he appears in Shin Megami Tensei III: Nocturne

Thor as he appears in Devil Summoner: Raidou Kuzunoha vs. The Soulless Army

Thor as he appears in Shin Megami Tensei IMAGINE

Thor as he appears in Persona 5 Royal 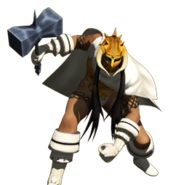 Thor as he appears in Persona Q: Shadow of the Labyrinth

Thor as he appears in Persona 3: The Movie 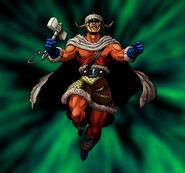 Thor as he appears in Devil Survivor

Thor as he appears in Devil Survivor 2

Thor as he appears in Card Summoner

Thor as he appears in Shin Megami Tensei IV -Prayers-

Thor's sprite as it appears in Last Bible II

Thor's sprite as it appears in Last Bible Special